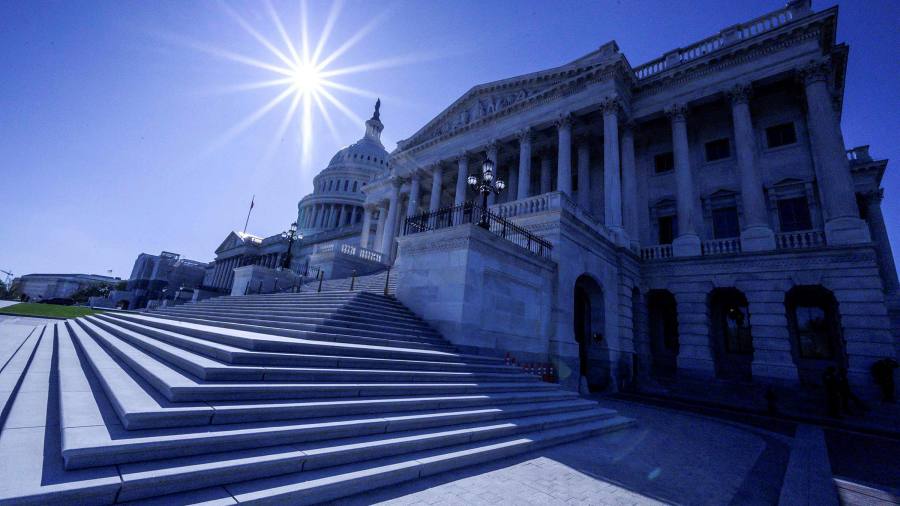 Sign up to myFT Daily Digest to be the first to know about US government shutdown news.

The “debt ceiling” trap is looming larger for the Biden administration and proponents of its $3.5tn social spending package. Likewise for markets.

Under a July 2019 deal, the debt ceiling law was suspended until August 1 this year. Now with the law back in force, both Democrats and Republicans may be underestimating the trouble it might cause.

New borrowing by the US Treasury is not permitted unless a new “debt ceiling” law is passed that allows borrowing above the existing level of about $28.5tn.

That means the government at some point must go into a partial shutdown without, at a minimum, a new debt service law and a short term “continuing resolution” for funding.

Even without new programmes, spending on operations such as flood relief, Covid-19 control and the Afghanistan pullout and resettlement will bump up against the debt limit. Treasury Secretary Janet Yellen has estimated the “X” date for when the government will run out of cash as sometime in October.

Never mind a rebuilding of society with better infrastructure and more equity. The government could need to suspend hundreds of thousands of employees and contractors without pay.

Mitch McConnell, the leader of Republicans in the Senate, who is formally opposed to the administration’s programme of taxes on the rich and spending on climate, health and social equity, has not offered any help to pass a raising of the debt ceiling.

He is offering only a short term “continuing resolution” until actual appropriations are passed by both houses and signed into law. McConnell has the votes to block a debt ceiling increase if he and his allies are unhappy with the tax-and-spend package.

And in the end, he has indicated that after that short continuing resolution of a month or so has passed, any appropriations for social spending and taxes on the rich (or carbon) will not be anything like $3.5tn. They may be half that, which is what conservative Democratic Senator Joe Manchin has reportedly talked about privately. This gap between bid and offer betides a long legislative fight.

All this uncertainty has the potential to have a disruptive effect on markets across the globe.

We had a hint of the risks and what actions the Fed can take from a transcript of a teleconference of the central bank’s policy-setting Federal Open Market Committee on October 16 2013.

It was released in January 2019 and is the most recent published account of the emergency “actions” the central bank plans to keep markets open in the event of a shutdown, according to a person familiar with the matter. Yellen and current Fed chair Jay Powell were on the call as board members.

According to the transcript, the board was updated on a joint memo that details nine “actions” as part of the contingency plan. The first seven are now standard Fed market tactics, including so-called reverse repurchase operations — lending Treasury securities to others to use as collateral.

More controversial though are other actions listed. Action 8 would remove Treasury securities with delayed or potentially delayed payments by buying them outright for the Fed’s account.

Action 9 would exchange customer’s or dealer’s bonds that are on the verge of default with bonds in the Fed’s portfolio that have later interest or principal payments.

Powell indicated such actions would be “loathsome” to take as it would mean the Fed would be stepping into a “difficult political world”, looking like it was making the problem go away. But he said in extremis, he would not rule them out.

The Fed board also would need the Treasury’s agreement to extend any delayed principal payments by one day at a time, no later than 10pm every day until the debt ceiling is fixed.

History and market people tell me this process would “taint” Treasury securities at risk of maturing during a shutdown. Investors would avoid them, and operators of clearing houses for financial products would at least “haircut”, or discount, the value of Treasuries as collateral for transactions. That would jam markets for interest rate products and foreign exchange.

As a report by the US General Accounting Office on the 2013 shutdown detailed: “Managers of one of the world’s largest derivatives exchanges said that they requested their counterparties not to use (as collateral) Treasury securities with principal or interest payments due in mid-October.”