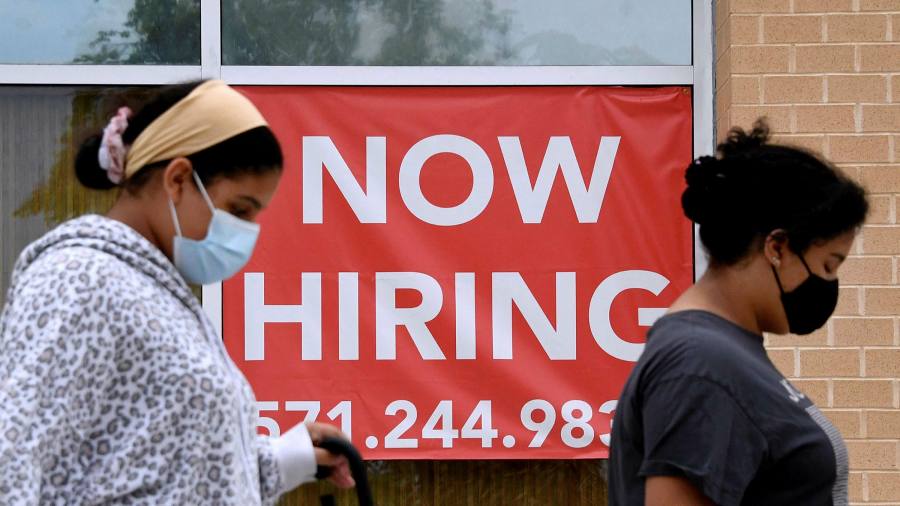 The US economy created 235,000 jobs in August, a sharp decline from the previous month and a sign that the more contagious Delta coronavirus variant is having an effect on hiring plans.

Non-farm payrolls data released by the Bureau of Labor Statistics on Friday marked a sharp deceleration from the upwardly revised 1.1m jobs created in July, and came in well below economists’ expectations for 733,000 positions in August. The unemployment rate ticked lower to 5.2 per cent, having hovered at 5.4 per cent in July.

“It is all Delta,” said Ian Shepherdson, chief economist at Pantheon Macroeconomics. “September is going to be similar if not worse, and I’m struggling to imagine we get a turnaround in October . . . I’d be really surprised if we got back to 500,000 [gains] before November.”

The leisure and hospitality sector saw no job gains in August, having increased by an average of 350,000 positions per month over the previous six months, according to the Bureau of Labor Statistics. In another sign that the Delta variant is having a major impact, restaurants suffered job losses of 42,000, while retailers had declines of 29,000.

Hiring in the construction sector also failed to pick up, with “little change” in the employment picture, according to the BLS.

Jobs gains were “notable” in professional and business services, manufacturing, transportation and warehousing, the report showed.

The extremely weak jobs report comes just days before the scheduled expiration of enhanced federal unemployment benefits that were put in place to blunt the economic damage caused by the pandemic.

The additional aid, which included an extra $300 in weekly assistance for unemployed Americans, is set to expire on September 6, removing a critical source of support for an estimated 7.5m workers at a time when Covid-19 cases are rising at an alarming rate in parts of the country.

Republicans have long argued that these measures are deterring people from returning to the workforce, prompting 25 predominantly conservative-leaning states to end the enhanced benefits over the summer.

Goldman Sachs economists estimate that July’s jobs growth would have been 400,000 higher had the enhanced benefits expired nationwide, and forecast next week’s termination to add 1.5m in payroll gains by the end of the year.

But other economists say there are a number of other reasons contributing to a broader labour market shortage, including persistent fears about catching Covid, as well as childcare issues. Thus far, the states that have cut benefits have not seen a marked change in employment trends, and Friday’s report indicated that a shortfall of workers is still rampant.

The labour force participation rate, which tracks the number of Americans either employed or looking for a job, did not improve in August, hovering at 61.7 per cent.

Average hourly earnings increased beyond economists’ expectations, at 0.6 per cent from July, for year-over-year gains of 4.3 per cent. The sharp rise was a “clear indication that demand for labour is still strong and the biggest obstacle for continued job growth is the pool of available workers”, said Thomas Simons at Jefferies. It also reflected the job losses in the low-wage leisure and hospitality sectors, economists said.

The weak jobs reports is a blow to the Biden administration at a difficult time for the White House, with the president’s approval ratings moving lower in recent weeks due to both the spread of the Delta variant and the troubled withdrawal from Afghanistan.

“What we’re seeing is an economic recovery that is durable and strong,” Biden said in remarks from the White House on Friday. “Even so, even with the progress we’ve made, we’re not where we need to be in our economic recovery.”

The US president urged Congress to pass the next stages of his economic agenda, including a $1.2tn bipartisan infrastructure plan, and a $3.5tn social spending programme financed by tax increases on corporations and the wealthy, in order to strengthen the recovery. But the US president did not signal a new push to further extend emergency jobless benefit payments tied to the pandemic.

Friday’s data were also released on the cusp of a potential policy pivot from the Federal Reserve, which is engaged in an active debate about the amount of stimulus it is injecting into financial markets.

Some officials have called for the US central bank to announce plans at its meeting in September to begin scaling back its $120bn asset purchase programme, arguing that the US economy is now on a sustainable growth path, particularly with rising inflation and a tightening labour market.

At the virtual Jackson Hole symposium of central bankers last week, chair Jay Powell endorsed an adjustment by the end of the year but indicated further strides needed to be made on the labour market front before tapering stimulus. He also cautioned against pulling back policy support prematurely, which he said would be “harmful” with “substantial slack” still in the jobs market and the pandemic raging.

Despite recent strides in the labour market, 5.3m more Americans remain out of work than in February 2020, before the onset of the global pandemic.

Friday’s report “takes some of the urgency out” of a September announcement, said Robert Rosener, senior US economist at Morgan Stanley. “It’s definitely disappointing to see the pace of job growth slowing in August.”

Rosener said it was still likely the taper announcement would come before the end of the year, but given the mounting evidence now that the Delta variant is crimping economic activity, the timing is very uncertain.

Ahead of the report, most investors had said they broadly believed the Fed would make the announcement at its policy meeting in November.

On Wall Street, stocks wavered in response to the new data, with the benchmark S&P 500 ending the day less than 0.1 per cent lower. Nearly 70 per cent of the stocks in the index fell, with those in more economically sensitive industries, including the transportation sector, sliding in value.

US Treasury yields, which move inversely to prices, rose following the announcement. The benchmark 10-year Treasury yield climbed 0.04 percentage points to 1.32 per cent as investors sold out of the debt, while the US dollar weakened against the pound.

In the eurozone, a recovering labour market saw July unemployment fall 0.2 percentage points to 7.6 per cent from the previous month, its lowest reading since May 2020, according to official data released this week.