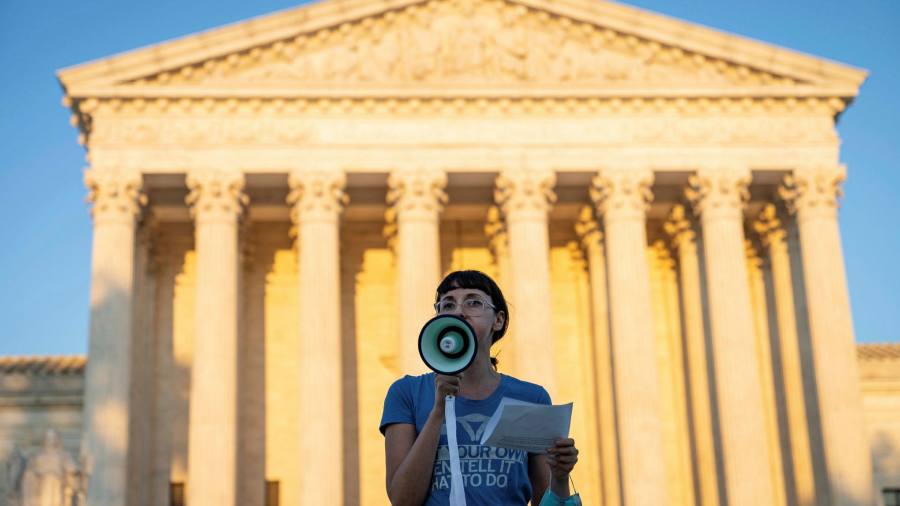 The US Department of Justice has sued Texas over a new law that severely restricts access to abortions, saying it is “in open defiance of the Constitution”.

The legal challenge from the DoJ will stoke tensions between the Biden administration and the Republican-led state government and legislature in Texas, which championed the bill despite criticism that it is draconian.

“This kind of scheme to nullify the constitution of the United States is one that all Americans, whatever their politics or party, should fear,” Merrick Garland, the US attorney-general, told reporters on Thursday.

“If it prevails, it may become a model for action in other areas by other states and with respect to other constitutional rights and judicial precedents,” he said.

Garland said the justice department would bring similar lawsuits against states which would use “provisions to deprive [their] citizens of their constitutional rights and . . . of the ability to seek immediate review”.

The Texas law is considered extreme even by conservative standards. It bans abortion after six weeks of pregnancy, before many women know that they are pregnant, without any exceptions for rape or incest. The law allows individuals to report people to authorities for helping women get abortions, and potentially receive at least $10,000 in payment.

“The statute deputises all private citizens without any showing of personal connection or injury to serve as bounty hunters,” Garland said.

The US attorney-general on Monday had said his agency was “urgently” exploring “all options” to challenge the Texas abortion law, “in order to protect the constitutional rights of women and other persons, including access to an abortion”.

At the same time, Garland promised to increase the enforcement of federal law against violence or intimidation aimed at abortion clinics and women seeking an abortion.

The justice department’s move comes after the Supreme Court, which is now dominated by conservative justices, declined to block the law when it took effect last week.

The Supreme Court’s decision has raised concerns that it could eventually overturn the legal precedent set by the 1973 Roe vs Wade case, which enshrined the constitutional right to an abortion, according to legal scholars, activists and Democratic lawmakers.

President Joe Biden attacked the decision after the law took effect last week. “The Texas law will significantly impair women’s access to the healthcare they need, particularly for communities of colour and individuals with low incomes,” he said.

“My administration is deeply committed to the constitutional right established in Roe vs Wade nearly five decades ago and will protect and defend that right,” he said.

Some Republican governors have praised the Texas law and even vowed to follow with their own additional restrictions on abortion. But many in the party at the national level are concerned it could alienate moderate voters.

Greg Abbott, the Republican governor of Texas, sought to defend the law this week but triggered another furore by insisting that he would try to “eliminate all rapists from the streets of Texas” rather than loosen the abortion curbs.

Jen Psaki, the White House press secretary, fired back: “If Governor Abbott has a means of eliminating all rapists or all rape from the United States, then there’ll be bipartisan support for that.”

Some Democrats have been pushing for Congress to pass legislation to codify abortion rights as a way of pre-empting any Supreme Court move to strike down Roe vs Wade.

While such a bill would probably pass the House of Representatives, it would struggle to clear the 60-vote supermajority threshold required to advance in the Senate.