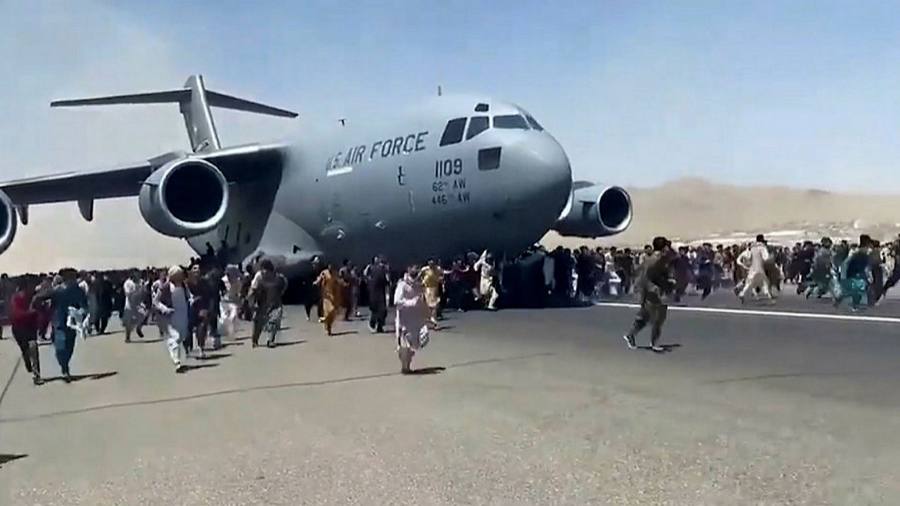 The Biden administration scrambled to put a botched evacuation of Afghanistan back on track on Tuesday as it admitted its original plans needed to be changed following chaos and violence at Kabul’s international airport.

In an attempt to project competence after the Taliban swiftly took control of the country in the face of a crumbling Afghan military, the White House said it had secured the airport and would speed up the pace of evacuations in the days ahead.

Jake Sullivan, president Joe Biden’s national security adviser, told reporters the administration had been “clear eyed” about the risk that the Islamist group would “end up in control of Afghanistan” but conceded “we did not anticipate it would happen at the speed” at which it did.

“Yes, there were chaotic scenes but . . . even well-drawn plans don’t survive first contact with reality, and they require adjustments, and we’ve made those adjustments,” Sullivan added.

The administration admitted the errors as the US Air Force offered the first grim details surrounding the take-off of a US C-17 aircraft amid a throng of civilians clamouring to climb on to the exterior of the plan. Videos on social media appeared to show two figures falling after it took off.

“Human remains were discovered in the wheel well of the C-17 after it landed at Al Udeid Air Base, Qatar,” said Ann Stefanek, spokesperson for the US Air Force, in a statement on Tuesday after Sullivan spoke.

She said the department of the Air Force office of special investigations was reviewing all available information, including the loss of civilian lives.

The plane had landed at Kabul on Sunday to deliver equipment to support the evacuation of Afghan and American civilians, she said, but “faced with a rapidly deteriorating security situation around the aircraft”, the crew decided to depart the airfield as quickly as possible. “Our hearts go out to the families of the deceased.”

Sullivan said the images were “heartbreaking” but that the administration stood by its decision to pull troops out of the country after a two-decade long war. Doing so fulfilled a pledge made last year on the campaign trail by Biden, who first began calling for a withdrawal when he was vice-president in the Obama administration.

He added: “President Biden had to think about the human costs of the alternative path as well, which was to stay in the middle of a civil conflict in Afghanistan.”

Sullivan said US officials were talking directly with the Taliban about ensuring the safety of civilians seeking to access the airport. He said the administration had “received reports of people being turned away” from the airport by the Taliban “or even beaten” and that the US was trying to resolve those issues via a backchannel with the Islamist group. “We are concerned about whether that will continue to unfold in the coming days,” Sullivan added, although he insisted that “as things stand right now, what we are finding is we are getting people through the gate”.

General Frank McKenzie, commander of the Centcom region in the Middle East and Afghanistan, said he had spoken with Taliban leaders on Sunday and “cautioned them against interference in our evacuation, and made it clear to them that any attack would be met with overwhelming force in the defence of our forces”.

The Taliban said it would not seek revenge against government officials or Afghan soldiers, and that the group would respect the rights of women “within the limits of Islamic law”.

Earlier on Tuesday, the Pentagon said there would be about 4,000 troops on the ground in Kabul by the end of the Tuesday and that a US Air Force aircraft brought about 1,000 extra US soldiers into Hamid Karzai International Airport overnight.

The pace of evacuations would now pick up, Pentagon spokesperson John Kirby told reporters. Between 700 and 800 people were evacuated overnight, 165 of who were US citizens, while the remainder were a mixture of Afghan visa holders and other nationalities. Kirby said there had been no hostile interactions with the Taliban at the airport, which remained secure. However, he declined to provide the number of casualties caused by US planes taking off with people clinging to the exteriors.

Biden’s top advisers addressed the media on Tuesday as the president remained at his country retreat in Camp David. On Monday, the president returned briefly to the White House to deliver remarks on the unfolding crisis.

Biden has faced criticism from within his own party over the administration’s handling of the troop withdrawal in Afghanistan. The New York Times reported that US spy agencies had warned this summer that the Afghan army could quickly collapse, despite repeated reassurances from Biden and his advisers that it had the resources and will to fight.

In response to a question about the intelligence reports, Sullivan said he was “not actually familiar with them”.

Senior Democratic lawmakers have pledged to hold congressional hearings investigating why the US was not better prepared for an orderly withdrawal of its troops from Afghanistan.