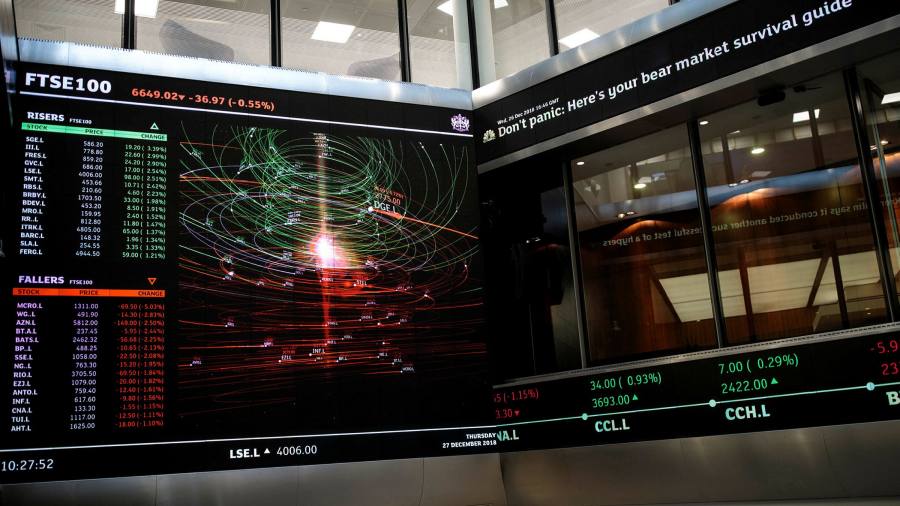 European equity markets were muted at the start of the week, as investors held back from strong bets ahead of US inflation data later in the week that may strengthen the case for tighter monetary policy in the world’s largest economy.

European financial services stocks, seen to benefit from higher interest rates that boost lending margins, rose 0.1 per cent. The Stoxx’s travel and leisure sub-sector advanced 0.9 per cent as investors responded to signs that the highly transmissible Omicron coronavirus variant could be milder than previous strains.

This followed a turbulent week across global financial markets after minutes from the US Federal Reserve’s latest meeting and an unexpectedly strong jobs report increased expectations of the world’s most influential central bank rapidly winding down its pandemic-era stimulus and raising borrowing costs.

On Wednesday, inflation data for the US is expected to show consumer prices rose at an annual pace of 7 per cent last month, according to a Reuters poll, up from 6.8 per cent in November and far exceeding the Fed’s average 2 per cent target. Inflation in the eurozone hit a record 5 per cent in December, piling pressure on the European Central Bank to speed up the withdrawal of its own emergency asset purchase programme.

Strategists at Goldman Sachs expect the Fed to raise rates four times this year, after tethering them close to zero in March 2020 to insulate markets and the economy from the shocks of coronavirus, in a move that pulled down businesses’ funding costs and boosted global stocks.

“We continue to see hikes in March, June, and September, and have now added a hike in December for a total of four in 2022,” Goldman’s Jan Hatzius said in a note to clients.

In Asia, Chinese tech stocks gained on Monday. Hong Kong’s Hang Seng Tech index gained as much as 2.5 per cent, with Alibaba Health Information Technology gaining as much as 14 per cent and short video platform Kuaishou’s Hong Kong-listed shares rising 12.2 per cent.

The index lost almost 3 per cent last week as traders around the world sold tech stocks in anticipation of rate increases from the Fed.

In debt markets, the yield on the benchmark 10-year Treasury bond rose 0.03 percentage points to 1.798 per cent, around its highest since January 2020. This key debt yield, which rises as the price of the debt instrument falls and underpins borrowing costs and company valuations worldwide, has climbed from about 1.53 per cent at the start of the month.