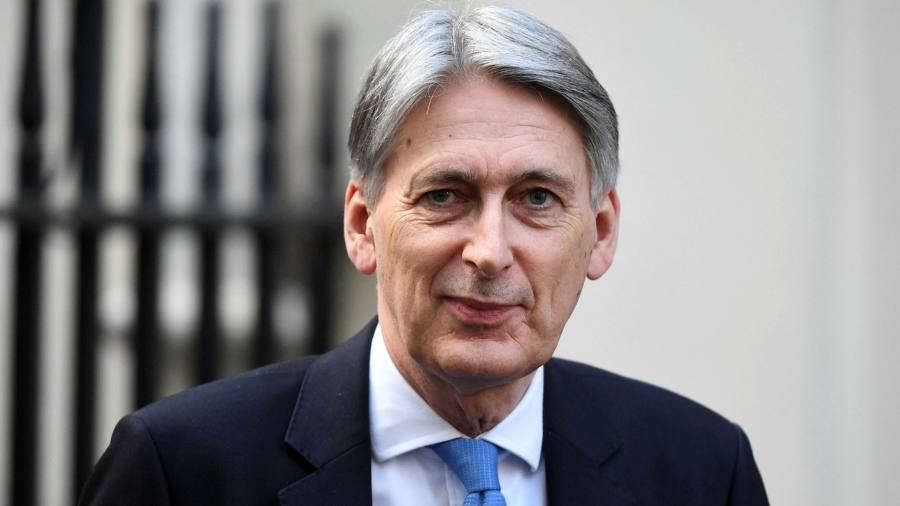 A Whitehall watchdog has rebuked former chancellor Lord Philip Hammond for contacting a top civil servant on behalf of a bank he is paid to advise, calling his actions “unwise” and “not acceptable”.

Lord Eric Pickles, chair of the Advisory Committee on Business Appointments, strongly criticised Hammond in letters released on Wednesday and alleged the former chancellor had considered seeking an injunction against the committee, a claim rejected by Hammond.

Hammond had emailed Charles Roxburgh, second permanent secretary at the Treasury, in July 2020 to push an offer from OakNorth Bank for free access to a borrower monitoring tool. At the time Hammond was in the middle of the usual two-year Acoba bar on lobbying the government after leaving office that was set to run until mid-2021.

“I do not consider it was in keeping with the letter or the spirit of the government’s rules for the former chancellor to contact HMT on behalf of a bank which pays for his advice,” Pickles said in a letter to Michael Gove, who oversees Acoba as Cabinet Office minister.

“The advisory committee has drawn the matter to the government’s attention. We will consider the exchanges of letters published and respond to their letter in due course,” said the Cabinet Office.

The rebuke from Pickles, who said Hammond’s actions were not a “blatant and deliberate attempt to breach the rules”, follows the scandal of David Cameron’s lobbying for Greensill Capital, the collapsed finance firm, which has heightened scrutiny of the conduct of former ministers and the UK’s rules on influencing government.

Hammond has insisted his email, which was revealed by The Sunday Telegraph, did not fall foul of Acoba’s rules because OakNorth was offering its software for free, and therefore would not have obtained any financial benefit.

OakNorth had met Treasury officials before Hammond made contact and met with them again subsequently. The government did not ultimately use the tool.

Pickles challenged Hammond’s argument, writing: “The material consideration is the privileged access you obtained for OakNorth not the commercial value of the proposition.”

His comments do not come with any material penalties for the former chancellor. Pickles himself has previously complained that Acoba, as an advisory body, lacks the powers needed to discipline former ministers or officials in the event of a breach of the code.

In March, he told a parliamentary inquiry that the group was effectively toothless. “I’m not aware, in the past 30 years, of a single sanction being imposed . . . there are no sanctions,” he said.

The Cabinet Office announced earlier this year that it was working with Acoba to improve the “efficacy” of its business appointment rules.

Ministers said the rules would be updated later this year with potential changes not only to their “scope and clarity” but also with greater enforcement powers.

Hammond forcefully rejected Pickles’ criticisms, urging him ahead of Wednesday’s publication to “withdraw” his findings. The former chancellor complained that Pickles had reprimanded him without stating explicitly if a breach of the rules had occurred.

“You describe my action as ‘not appropriate’, but stop short of claiming that I was in breach of the restrictions,” Hammond wrote.

“The restrictions of the condition [Acoba set] are clear and I have complied with both the letter and the spirit of them,” he added.

In the published correspondence, Pickles claimed Hammond had been “seeking advice on possible legal action, including an injunction to prevent publication”.

“Lord Hammond was not seeking an injunction. He sought advice to ensure that his reply to Acoba was properly informed by a legal understanding. That understanding was then reflected in Lord Hammond’s letter to Lord Pickles yesterday afternoon,” said Hammond’s spokesperson.

The lobbying regulator, Harry Rich, is separately investigating whether Hammond should have registered as a lobbyist as a result of the email.

Rich’s office declined to comment on Wednesday. Hammond has denied that his actions triggered an obligation to register.