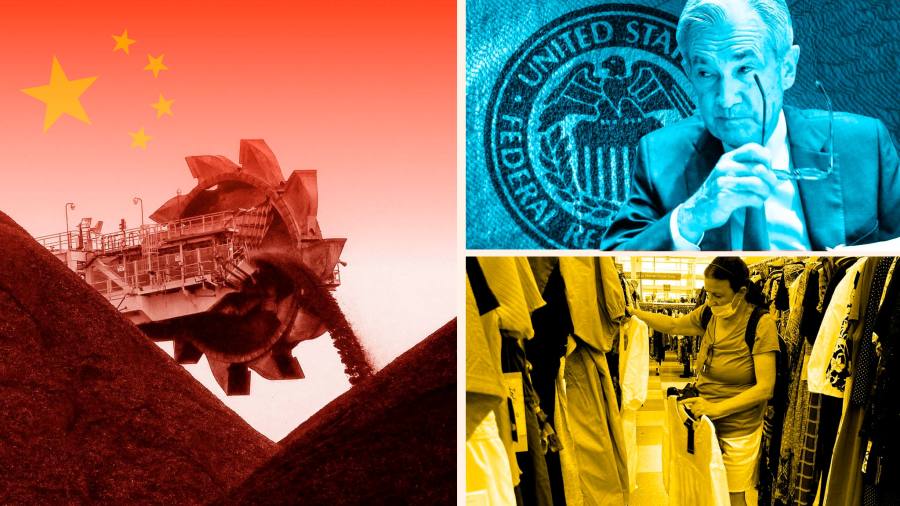 Will weakening Chinese demand continue to weigh on commodity markets?

From copper to crude and corn to coal, commodity prices have enjoyed a powerful rally from last year’s pandemic lows, aided by China’s hunger for raw materials and huge stimulus packages.

The question now is whether this broad-based advance, which has boosted the profits of miners, oil and gas companies and big crop producers, has run out of steam. The Bloomberg Commodity Index has drifted higher since the start of May.

To that end analysts and investors will be watching Chinese industrial production numbers on Monday for clues about demand in the world’s biggest consumer of raw materials.

The latest trade data from China suggest that demand is slowing. With a couple of exceptions — most notably coal — imports of key commodities declined both year on year and month on month in July. Credit growth also decelerated last month while inflation ticked higher.

“Leaving commodity-specific factors aside, though, the overall picture is one of weaker demand, which is a trend we see intensifying in the months ahead,” Capital Economics said in a report last week.

Morgan Stanley expects industrial production growth to have slipped to 7.8 per cent year on year in July, down from 8.3 per cent, reflecting recent heavy flooding in parts of the country but also Beijing’s decarbonisation drive.

China has stepped up efforts to cut pollution from its vast steelmaking industry as it targets peak emissions in 2030. This has weighed on the iron price, which has fallen 26 per cent in the past month to just over $160 a tonne, according to S&P Global Platts.

To reach its goal of keeping production below 1bn tonnes this year, ANZ says Chinese authorities will look to regulate the domestic market with targeted environmental checks. Neil Hume

What will the Fed’s minutes reveal about the debate over tapering?

Minutes from the Federal Reserve’s July policymaking meeting, to be released Wednesday, should offer more details on the conditions under which the central bank would begin withdrawing its support of the US economy.

Chair Jay Powell in his July 28 statement said the Fed was looking for more progress in the labour market recovery before it was prepared to begin easing its $120bn of monthly asset purchases. But since Powell’s press conference, multiple Fed officials have adopted a more hawkish tone, including vice-chair Richard Clarida, who said US inflation and economic recovery were moving towards thresholds that would warrant a change in monetary policy.

Jim Vogel, head of the interest rate strategy group at FHN Financial, said he was hoping to get answers to questions such as: “We have heard from many who want to get the taper moving. What was the other side of the argument? Did that match the message from Powell on July 28 that suggested progress was not substantial enough? How closely might ‘substantial’ be tied to the August payroll report?”

Investors and analysts will also be looking for any discussion of inflation. Since the Fed meeting, the Bureau of Labor Statistics released figures showing that consumer prices in July had risen at a slower rate than June on a month-on-month basis, which supports the central bank’s argument that inflation this year has been driven higher by temporary forces related to the reopening of the economy. Kate Duguid

How are US consumers faring as coronavirus cases jump?

A wave of coronavirus cases sweeping across swaths of the US has prompted a renewed focus on the extent to which the pandemic is affecting consumer spending in the world’s biggest economy.

A report on retail sales scheduled for Tuesday is expected to shed light on the situation. Wall Street economists polled by Bloomberg forecast the measure to have slipped 0.2 per cent in July from the previous month, with supply chain issues in the auto sector weighing on vehicle sales.

However, a core measure that is considered a better proxy for the state of consumption — which accounts for about 70 per cent of US economic output — is expected to have risen just 0.2 per cent after a 1.1 per cent rise in June.

“The month started out strong, but we see from the high-frequency credit card data that spending slowed into the end of July,” said analysts at RBC Capital Markets in a note to clients.

“Some stabilisation around the rise in Covid cases could help to salvage August, but . . . there are nascent signs at best of that stabilisation,” RBC added. “In other words, we should likely brace for a couple of months of relatively soft spending.”

Morgan Stanley analysts said consumers appeared less concerned over coronavirus than they had been last summer, but the Wall Street bank has also seen signs in recent surveys that “concerns over the Delta variant resulted in a resurgence in hesitancy to engage in high-risk activities”.

The bank added that “an increase in so-called ‘self-policing’” could also cause a shift towards the goods sector and away from services such as hotels and restaurants. “This development bears watching,” it said.

Investors will also this week get a flurry of earnings from major US retailers including Walmart, Target and TJ Maxx owner TJX Cos. DIY chains Home Depot and Lowe’s are also set to reveal their quarterly figures and outlooks for the remainder of 2021. Adam Samson