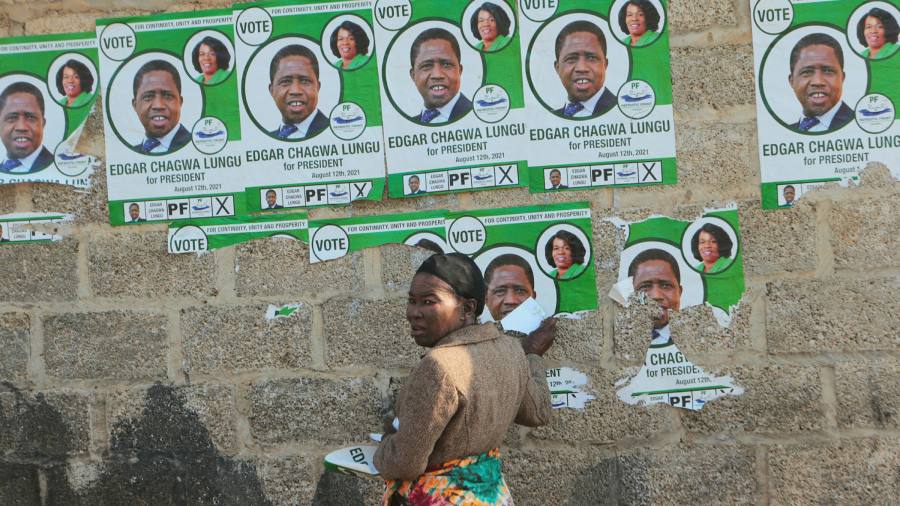 Sign up to myFT Daily Digest to be the first to know about Zambia news.

Zambia’s opposition leader Hakainde Hichilema was elected president of Africa’s second-largest copper producer in a sweeping victory against incumbent Edgar Lungu, who attacked the vote as a “nullity”.

Hichilema was declared the victor with more than 2.8m votes to Lungu’s 1.8m, Zambia’s electoral commission said on Monday, after an election last week that was fought amid the country’s worst economic crisis in decades, including default on billions of dollars of debt.

Hichilema, a businessman who won the presidency on his sixth attempt, will have to move quickly to conclude talks for an IMF bailout and secure deals with creditors to resolve more than $12bn of external debts that are throttling an economic recovery.

The 59 per cent majority for Hichilema’s United Party for National Development will mark Zambia’s third transfer of power through the ballot box in as many decades of multi-party democracy.

In a statement on Saturday, Lungu, who has been president since 2015, called the election “not free or fair” and said that his ruling Patriotic Front was contemplating its next steps. Voting in three opposition stronghold regions was “characterised by violence, rendering the whole exercise a nullity”, he claimed.

His party could approach the courts to challenge the result but analysts said the margin of its defeat made a legal bid unlikely to succeed.

Lungu said that his party’s agents had been chased away from observing voting and attacked by the opposition. But election observers from Zambian churches said that these agents were present at almost all polling stations.

Political violence had become “disturbingly common” in the election, the observers added, but ruling-party cadres had been twice as violent as members of Hichilema’s party.

Hichilema’s UPND said Lungu was engaged in a “desperate final act” to remain in power. In a joint statement, other opposition parties called on the president to concede defeat and said a legal bid to delay results would be “an abuse of court process”.

Before the election, analysts and activists had pointed to the tight grip that Lungu’s party held over campaigning, with rallies all but banned under coronavirus pandemic restrictions and very little airtime afforded to opposition parties.

The government deployed the army ahead of the poll and shut down access to social media platforms such as WhatsApp on the day of voting. The election was marred by “abuse of incumbency” and “misuse of state resources”, according to EU monitors.

Despite those obstacles, an estimated two-thirds of the electorate turned out on voting day while a high court judge threw out the social media ban on Saturday. In the past, Zambia’s army has declined to prop up losing incumbents.

Hichilema, 59, who is known as “HH” or “Bally” by young Zambians, lost to Lungu by the narrowest of margins in a 2016 vote that was marred by allegations of vote-rigging.

Zambia’s sovereign debt was under stress even before it entered its first recession in decades last year in the turmoil of the pandemic. The state defaulted on bond payments in 2020 after Lungu’s government borrowed huge sums to fund infrastructure. State takeovers of copper mines under Lungu have also backfired even as copper prices rose this year.

Hichilema has pledged to prioritise restructuring talks with creditors, which would have to include investors in defaulted US dollar bonds that made up about a quarter of the external debt.