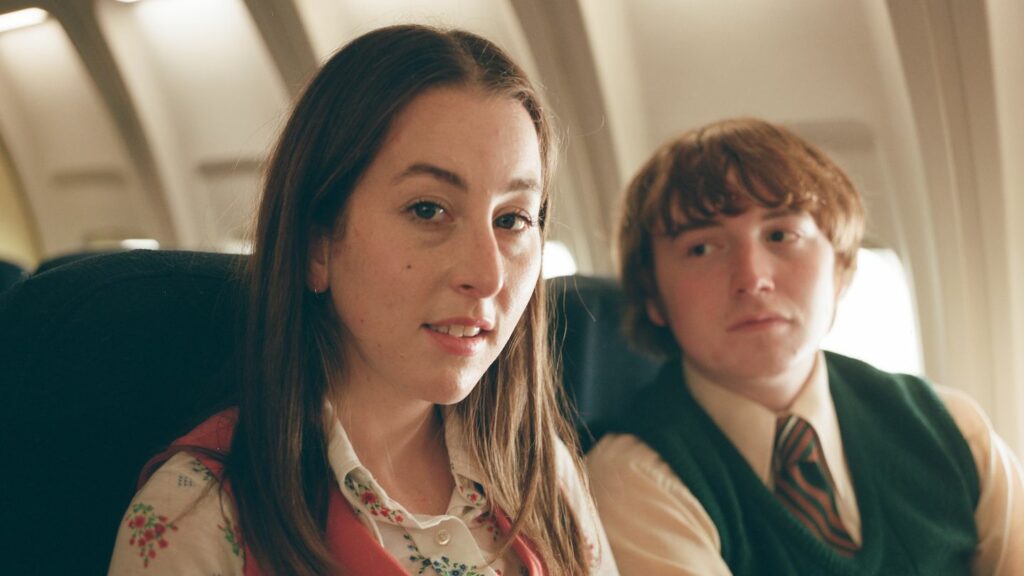 Alana Haim hails from the San Fernando Valley. It’s her home. So, sweating in the streets of 1973 California as twentysomething Alana Kane in Licorice Pizza, Paul Thomas Anderson’s naturalistic new film about the frenetic, ephemeral magic of youth? Totally normal.

“It’s fucking hot,” she tells MTV News. “And that’s how I grew up. You never wore makeup because it melted off your face. Every day you were running around trying to find a pool.”

Haim, her band with her two older sisters, Danielle and Este, has been her full-time gig since at least 2012. They’ve released three albums, the latest of which, 2020’s Women in Music Pt. III, snagged two Grammy bids, including Album of the Year. They’ve toured the globe, and next year, their just-announced run will hit world-famous venues Madison Square Garden and the Hollywood Bowl.

Haim and Anderson had collaborated before, fashioning a visual language among corners of their own Los Angeles. “Valley kids always find Valley kids,” she says. And he found something arresting in the guitarist, so he did what anyone would do. He wrote a movie for her to lead.

And in that leading role, her first, her magnetism blazes — beguiling enough to secure major nominations, including a Golden Globe nod, as awards season gains steam.

MTV News: With your band Haim, you’ve had some experience with major awards, even playing the Grammys last year. Where were you when you found out you were nominated?

Haim: You know, I keep my phone on silent when I sleep, and I woke up to maybe like 75 calls from my mother, and I thought someone had died. When my siblings and I got nominated for a Grammy, the same thing happened. I got so many calls from my mom, thinking that somebody had died. But I woke up and I called her, and she was crying about Critics Choice, and it was just — it hasn’t really hit me yet. I don’t really know, but it’s mind-blowing.

MTV News: Paul Thomas Anderson allowed you a little bit of creative freedom in your performance as Alana Kane. Can you touch on what kind of input you had in the development of the role?

Haim: I love making people laugh. During some of the filming, I would have an idea, and Paul would get really excited and be like, “Don’t tell me, just do it.” It’s just so crazy because Paul is Paul, and for someone like Paul to be like, “Do what you’re thinking” — I didn’t expect him to be that way. Also, I’ve never acted before, so I didn’t really know what I was doing. But I would have these ideas, and a lot of the ideas got into the film. Every day I would wait for Paul to — if he put his hands up and cried with laughter, then I did my job for the day.

MTV News: Licorice Pizza, as a name, is a callback to both an old Southern California record store from the 1970s and ’80s and just the general vibe of the time period. Were there specific songs or artists who helped you capture Alana’s essence in the movie? What would she have been listening to after a long day taking high school kids’ pictures or selling waterbeds?

Haim: Probably “Band of Gold” by Freda Payne. That was a big one. My parents were in their twenties in the early ’70s, and if I could have a magic mirror to see something from the past, it would be my parents dancing. It’s a little bit more Boogie Nights than Licorice Pizza, but they would go to dance clubs.

They would go to the disco. That was their thing. They knew all the dances. They knew all the songs. And I really lived that throughout my whole life, so stepping into 1973 wasn’t so out of my depth. I had known so much about the ’70s, but definitely every day I woke up listening to “Band of Gold.”

MTV News: There’s this key moment in the movie when you’re acting face to face with Sean Penn, and later in the sequence Tom Waits enters. You’ve worked with legends before, from Taylor Swift to Charli XCX to Tame Impala to Rostam, but I’d consider them more your contemporaries — what’s it like to sit across from people whose work you’ve been aware of most of your life and end up working as peers?

Haim: Um, crazy?! Insane. There was a lot of pinch-me moments during this whole process. I still can’t believe it. Thank god there’s video evidence of everything that I did because I feel like if there wasn’t, I would probably in a couple of years not even believe it myself.

Imagine being at a table with Sean Penn and also Tom Waits, who is not only an incredible actor, but the best musician of all time and best songwriter and just all-around amazing guy.

But I was just, you know, riding the wave. That’s as weird California jargon as I can explain it. I was just really riding the wave of being like, “If I freak out and think about it too much, I probably will cry or pee my pants.”

MTV News: It’s evident what kind of joy you find in live performance; you’re often bouncing around onstage, feeding off and amping up the crowd’s energy. The energy on a film set is different, so I’m wondering how you got yourself into a headspace where you could deliver your performance, especially on what I’d think is a small set, made even smaller by COVID restrictions.

Haim: My mom says I came out of the womb with a smile on my face. And that’s just me. We were all kind of going through this together. Me and my siblings get to talk about this for the rest of our lives, and that’s so, so special to me. Really I think the performance that I gave was just because I was happy.

Even though Alana Kane screams and stomps her feet and tries to make her presence known with her family, even though she feels like she’s never being heard, and she’s the one person in her family that can’t get it together — which is so not me, I don’t think I’ve ever screamed at my father before filming that scene after the Shabbat.

MTV News: It’s a film sort of about family, both blood-related and self-created, if you’ll pardon the rhyme. What would you say are some of the benefits of working with your family?

Haim: I’ve always worked with my family, so I’m very lucky that it wasn’t so out of my comfort zone. Having my dad act was a different experience. He’s never acted before. But having him on set, I think the thing that felt great was when we actually did sit down to do the Shabbat dinner scene, it really did feel like there were no cameras there. It just felt like we were actually having Shabbat.

But it was great having all of Paul’s kids in the movie, and Maya [Rudolph, Anderson’s partner]. And Cooper [Hoffman]’s mom was in the movie. So were his siblings.

It really did feel like we were on a weird family vacation back in time. I’m so lucky that I got to look around on set, and I pretty much knew 90 percent of the people there. Every day I was sad to leave set. I was like, “OK, if I go home, I’m gonna sleep, but then I get to come home — I get to go actually home the next morning.” I mean, it was fucking great.

MTV News: Haim just announced the One More Haim Tour for 2022, where you’ll be back on the road for the first time since early 2020. What are you looking forward to about playing in front of thousands of people again?

Haim: When we made Women in Music Pt. III, we really did have the live show in mind. And this is our biggest tour that we’ve ever done. We’re playing shows that I never in my wildest dreams would ever think we would play. We’re playing Madison Square Garden and the Hollywood Bowl, which are venues when growing up you’re like, “There’s no way. Come on.

There’s no way! You’re not gonna play those venues.” And we are! I feel like I said “pinch-me moments” already, but talk about a pinch-me moment, being able to play MSG and play a record that we’re so incredibly proud of. Just get me on the road!