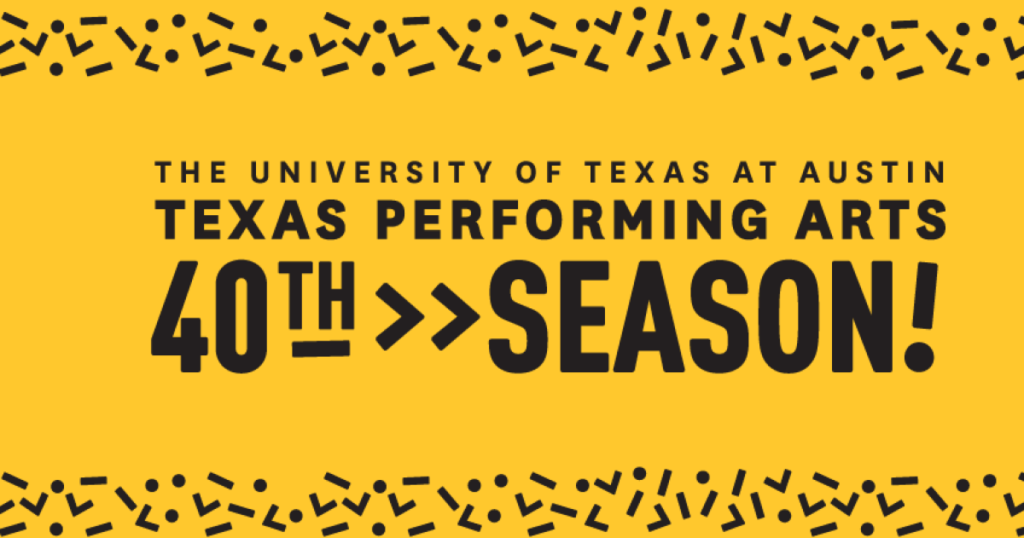 Bob Bursey came on board as the new executive and artistic director of Texas Performing Arts in January of 2020, so he wasn’t on the job long before all of the organization’s stages were forced to go dark for the Covid-19 lockdowns. “It’s been a very strange start [to the job] for me,” he says. “But it’s clear that there’s an incredible history here and a real appetite for the work that ambitious and adventurous artists are doing and [for] great, in-person live performance experiences. So that’s what we’re trying to do through some of the projects in our 40th anniversary season.”

The staff of Texas Performing Arts has done what they can to stay connected with audiences during the pandemic (they’ve hosted gallery shows on the Bass Concert Hall stage, funded residencies for local artists, and used the downtime to do some renovations), but it’s been a long time since they’ve been able to raise the curtain on a live performance for a full audience. That’s something Bursey is eager to see happen again. “It’s so exciting to see the possibility of welcoming people back into the theater and into those in-person, live performance experiences,” he says. “And I’m really looking forward to getting to know more of that theater-going community. One thing that I’ve learned as I’ve been talking to folks about the 40th anniversary of the organization is how important it has been to Austin over its history, and how many people have a connection to it because they saw their favorite comedian, or their family has had subscription tickets to our Broadway in Austin series… or they discovered dance or classical music or opera in our spaces.”

Bursey says he’s trying to curate a season that’ll include a bit of all the types of performances TPA has been known for over the decades. “The first company to actually perform on the Bass Concert Hall stage when it opened in 1981 was the incomparable Alvin Ailey American Dance Theater,” Bursey says. “And so we’re welcoming them back March 11 and 12 of 2022, and that will definitely be a highlight.”

The season will also feature the Texas debut of New York’s famed experimental theater company The Wooster Group, a new work from the Kronos Quartet, a collaboration with Austin’s own Fusebox Festival, and of course several installments of the Broadway in Austin series. And this weekend will mark the arrival of STOMP, the first touring production to perform at Bass since the start of the pandemic.

“Back in March of 2020, we were doing one of our Broadway in Austin performances with Disney’s Aladdin, and it has been now I guess 17 months since then,” Bursey says. “And our hope is to reopen the space to touring artists with two performances of STOMP. I’m planning to come with my kids and we’re excited to reopen Bass Concert Hall after a three million dollar renovation that we’ve done during the dark time of the pandemic, and welcome people back safely and carefully.”

Bursey is eager to reopen TPA’s stages, and he’s also confident that audiences are ready to come back. “It’s been interesting,” he says. “The subscription audience for the Broadway in Austin series has actually grown significantly during the pandemic. And we’re really grateful and excited by how enthusiastic people are about getting back to the theater. The full house in Bass Concert Hall, and the curtain is going up and the lights are going down – yeah, that’s what we’ve been working for this whole long, long intermission.”