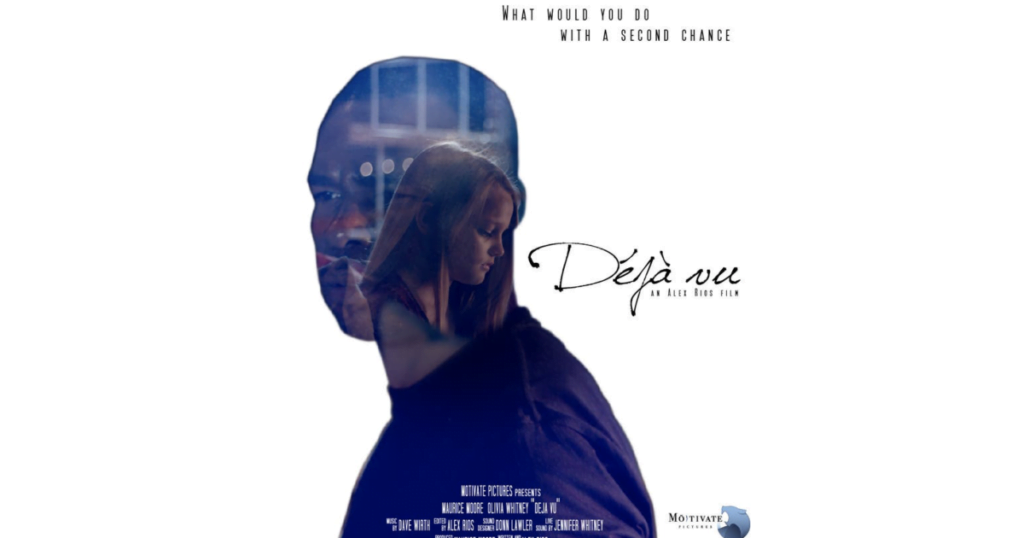 Independent filmmaker Maurice Moore is getting ready to premier his latest movie, Déjà vu, which is not the movie he thought he’d be wrapping up this year. Last March, Moore and his crew at Motivate Pictures were set to start filming a script called The Place She Dwells when Covid-19 abruptly halted production.

“Covid changed lives in a lot of different ways when it showed up,” Moore says. “And that’s exactly what happened here.”

Moore’s longtime filmmaking partner, cinematographer Alex Rios, arrived from Barcelona just before lockdown protocols went into place. “We were having our final script read with the cast and the crew on Saturday the [14th] of March,” Moore says. “And that day that [Rios] landed, they shut everything down.”

Those shutdowns put a hold on filming The Place She Dwells and also made it impossible for Rios to return to Spain anytime soon. Now quarantined together at Moore’s house, Rios and Moore found themselves with no film to shoot and plenty of time on their hands. “And I was really ready to create,” Moore says. “So I brought Alex into my office… and I said, ‘Okay, I’m going to present a challenge to both of us: In 24 hours, between now and tomorrow evening, we both have to come up with some script ideas, story ideas that we can shoot in the Covid world, being locked down, with the resources that we have. Go!’”

24 hours later, Moore and Rios had both come up with some script ideas, and one of Rios’ pitches was the story that would become Déjà vu. “I really loved this idea because it dealt with some really interesting elements that I wanted to see how we were going to accomplish with a crew of two and the limited resources we had,” Moore says.

Lockdown protocols meant that the cast and crew was limited to the people already in Moore’s Covid bubble. Rios became both cinematographer and director; Moore served as producer, actor, and, he says, “gaffer, grip, any and everything that you would ever possibly want”. Moore’s girlfriend, Jennifer Whitney, who he says “is not a part of the film world by any stretch of the imagination” had to quickly learn how to record sound, and her daughter Olivia Whitney put her acting training to use as Moore’s co-star.

“Everything takes place in our home except for a few exterior scenes that we shot during the time that everything was locked down and closed down, which makes it very eerie,” Moore says. “That was part of the writing process, to write a story… that had a really nice beginning, middle, and end in this area. So we were in the backyard, we were in the front yard, we were upstairs, we were downstairs, and we really utilized everything that we could. And I think we ended up with a really beautiful film.”

Moore is hesitant to give too much away about the plot, but he will share this much: “It’s not the Covid world, but it takes place during quarantine, and there’s something happening to the planet during this quarantine that really forces everyone to stay inside. [If] someone goes outside, something happens to them specifically. My character is somewhat of a scientist that kind of understands what’s going on, and my daughter is really trying to understand how the world is working right now.”

Limitations on space, crew, cast, and resources made Déjà vu a challenging production, but Moore says he’s really proud of the finished product. “It is a really, really beautiful story of connection and relationship,” he says. “It has some heartbreaking moments… and then it gives a really great sense of hope in the end, which is what I really – with all my films – work and strive toward.”

‘Deja Vu’ will screen (along with a few short films from Motivate Pictures) at the AFS Cinema on August 12.