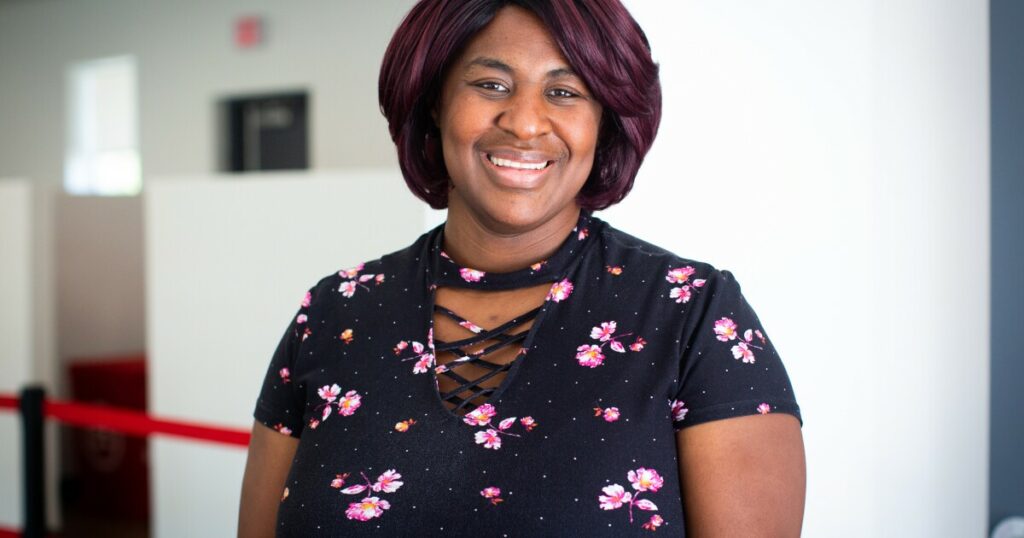 When Jereka Thomas-Hockaday first saw the email, she thought it was a scam.

“Me?” she thought once she learned it was real. “Really, me?”

The Netflix series Queer Eye had selected her to be on the show. Each season, the Queer Eye cast, known as the Fab Five, visits a new city and gives a select few people lifestyle makeovers — revamping their wardrobe, hair and makeup; redesigning their homes; and teaching them new cooking skills and ways to take care of their mental health.

The show chose Austin for its 2020 season, which was quickly derailed by the COVID-19 pandemic. Filming started up again in early 2021, and the entire season was released Dec. 31. This season largely focuses on people who have experienced loss or given back to the community during this time of immense need.

People like Jereka Thomas-Hockaday. In June 2019, she co-founded the Central Texas Allied Health Institute, a medical training school geared toward students who are at or below the federal poverty level, with the goal of getting more people of color into the medical workforce. When the pandemic hit, she and her students set up a COVID-19 clinic.

They offered testing and eventually vaccines at the Ana Lark Center in East Austin, which has far fewer health care facilities than West Austin and is home to many low-income Black and brown residents. The COVID-19 pandemic exposed a lot of Austin’s health care inequities, and she wanted to ensure the communities that have been hit hardest by the virus had access to testing and vaccines.

“Most of these [patients] are people of color,” she said. “They’ve told us that they’re comfortable with coming to us. I have people who come all the time now to get tested because they know us, they trust us.”

Thomas-Hockaday was nominated to be on the show by her business partner and her husband. During her episode, titled “Community Allied,” her family and friends explain she’s a workaholic. She’s known to spend so much time working to help others, she has little time to take care of herself or do things she enjoys, like cooking.

“She cares very much about everybody else, but the problem is she puts 110% of herself in and she doesn’t really take care of herself,” her husband, Ben, explains at the beginning of the episode.

During the show, grooming expert Jonathan Van Ness gives her a makeover; fashion designer Tan France gives her a new wardrobe; culture expert Karamo Brown encourages her to celebrate her successes; chef Antoni Porowski shows her quick meals to incorporate into her busy schedule; and interior designer Bobby Berk redesigns her garden and the break room at the community clinic.

“It was a great experience,” Thomas-Hockaday said. “This was a Hollywood production-style filming. My whole street was lined up with people. … I don’t think I prepared myself for the level of activity that was going to be going on. But you know, it is really true that after a while, you just kind of forget they’re there.”

After being away from her family for four days as the Fab Five did their work, she returned home and to the clinic for the big reveal.

“I think the reveal day was probably the best day for me because I got to see the students enjoying the break room, and it was a really happy day,” she said.

Since being on the show, Thomas-Hockaday says she’s taken a lot of the Fab Five’s advice. She now wears her hair natural, as Jonathan suggested, takes more time to enjoy the “small wins” in life and cooks more at home.

“I think I’ve just tried to slow down a little bit more and prioritize my personal life over my business,” she said. “And before, it was all business.”

But she also hopes the show gives the Central Texas Allied Health Institute and her clinic more exposure. Since the show was filmed, the clinic has struggled to stay open.

It had been funded by Austin Public Health through a contract that ended in October 2021. Over the summer, as the delta variant led to a spike in cases, Thomas-Hockaday said she asked if the city could keep funding the clinic, but was told there wasn’t any money available to extend the contract.

APH explained to KUT that it uses data to determine where funding will go.

“As part of the natural conclusion of any contract, APH constantly reviews and evaluates operations against data, current landscape, and community needs,” a spokesperson said in an email. “Data from the Texas [Department of State Health Services] show most doses that the community is receiving are provided by pharmacies rather than public health departments.”

Without funding, Thomas-Hockaday and her staff had to make a decision: find a way to keep the clinic open or shut it down.

“We felt like it would be a disservice to the community to close it because so many folks know we are here and we really have become a staple of the community now because they know that there is a place right down the street from them,” she said.

CTAHI has started an online fundraising campaign called Neighbors-4-Neighbors to help keep the clinic open. It’s now running entirely on outside donations, including $100,000 from Austin Mutual Aid. The clinic has had to shrink operations and is currently managed by three students and a supervisor.

Demand for COVID-19 testing has only increased as the highly contagious omicron variant has caused a surge in cases. Since Christmas, Thomas-Hockaday said, the clinic has had no fewer than 200 people coming in a day for either testing or vaccinations.

“We’re trying to stay open as long as we can, but without some large infusion of cash, I don’t know how much longer we’re going to be able to run it just fiscally,” she said. “And I hate that for the community.”

Originally located at the Ana Lark Center, the clinic moved to the African American Youth Harvest Foundation at the start of the new year. But the break room Bobby Berk redesigned in Queer Eye is still being put to use. The Central Texas Allied Health Institute, which had been located in South Austin, moved into the Ana Lark Center.

The Ana Lark Center at 1400 Tillery Street is now the site of the Central Texas Allied Health Institute.

This location change was the plan for the clinic all along, Thomas-Hockaday said. CTAHI has been partnering with the Harvest Foundation for vaccine clinics since March. The foundation is already a hub of resources, providing a number of services, such as counseling, leadership training, youth mentorship, workforce assistance and other social services. Its founder and CEO, Michael Lofton, said when he was asked to take the CTAHI partnership to another level and have the clinic move in, he saw it as another way to help fill the gaps in services in Travis County’s Eastern Crescent.

“It just really allowed us to serve more on a real-time basis,” he said. “We could just easily say, come on over to the Harvest Foundation’s resource center, and we can meet all of your needs … vaccinations being one of many, many services that we offer.”

The clinic has been successful in reaching Austin’s Black and Hispanic residents; 15% of its vaccine recipients have been Black and 54% Hispanic, according to CTAHI. Thomas-Hockaday says she would like the clinic to be fully staffed one day. And once COVID-19 recedes, she’s looking into keeping the clinic open and possibly applying for status as federally qualified health center.

“I would very much like to do that, but, you know, that requires money as well,” she said.

The Central Texas Allied Health Institute itself is also seeking out funding, Thomas-Hockaday says, so more students can attend. Many of the students require scholarships, but CTAHI is limited on the funding opportunities it can provide them with right now. It is in the process of applying to be part of the federal financial aid system, but the process takes several months. So for now, in terms of aid, students are limited to state-level workforce funding.

“If a student is slightly above the poverty level, the only other thing that we have to offer them is a payment plan, a cash payment plan, and most of these students can’t do that,” Thomas-Hockaday said. “So, until we receive that approval to get funding, to do federal financial aid, because that will open up many, many more doors for us, we’re really trying to work on some private money that we can offer to students.”

On Friday, HCA Healthcare Foundation announced it was awarding a $250,000 grant to the institute to help cover students’ living expenses while they are completing their clinical training programs.

Since being on Queer Eye, Thomas-Hockaday says she’s gotten a lot of positive reactions, and her social media has “blown up.” The exposure has been “marginally” helpful in terms of attracting funding, but she’s still hopeful.

“Everything has been really inspirational, and it’s given me a little boost,” she says. “I’ve been a little bummed out after we lost our funding from the city, but to see that we’re being received so well, it gives me a little positive boost and hope that we can continue to work and that people see what we’re doing and they’re very supportive of it.”

Editor’s note: Before filming the show, Queer Eye asked KUT for suggestions of people in the Austin area the show could highlight amid the COVID-19 pandemic. KUT included Jereka Thomas-Hockaday in a list of suggestions but was not aware of her selection until the show aired. The episode also says her business partner and husband nominated her.