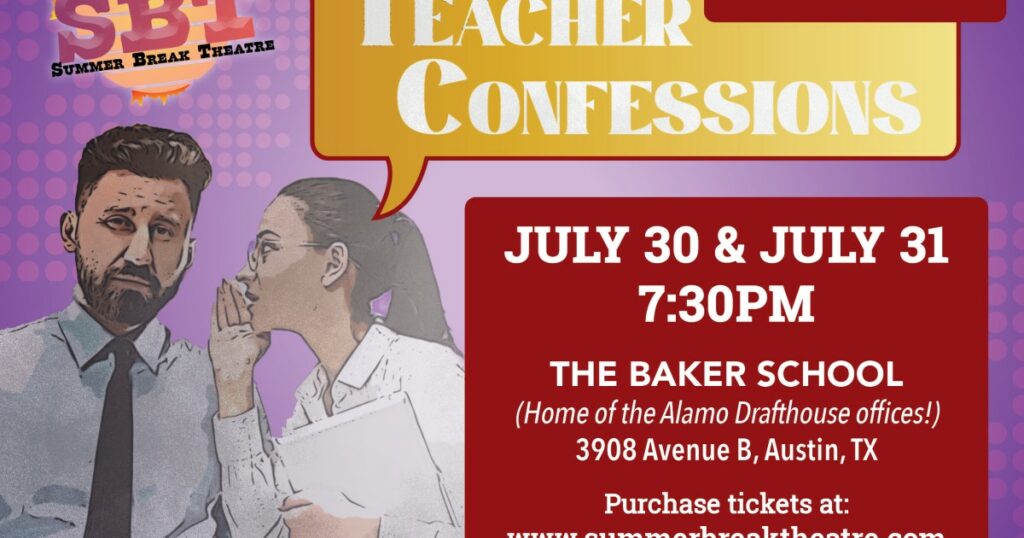 “There are theater teachers for sure, but we have English teachers, we’ve had [a] science teacher. We’ll take anyone who wants to perform,” says Jon DeMitchell, who teachers high school theater in Georgetown and also serves as the co-producing director of Summer Break Theatre. “I mean, it’s that creative outlet that you don’t always get to focus on yourself when you’re in school, when you’re teaching.”

Summer Break is a theater company made up of local school teachers; they’ve been performing together for a few years now and are just about to debut their latest show, Teacher Confessions.

“Teacher Confessions is inspired by, and kind of loosely based on, [the recurring stage show] Austin Secrets, says Summer Break artistic director Maggie Meador (who also teaches middle school theater in Round Rock ISD). “It takes anonymous stories from teachers, and then we’re going to turn around and perform them on the stage. And so it’s meant to take confessions and take stories… in a way that’s also kind of safe, because the form was anonymous. We will either narrate them, kind of like a monologue, or we will do it as a sketch. But we’ve also encouraged teachers to remember that they don’t all have to be funny – they can also be sad or poignant or bittersweet or serious.”

“It’s interesting how common a lot of the stories that all of us teachers have… how common these stories are,” DeMitchell. “I’ve only been a teacher for seven years, [but] I think I’ve gone through a large portion of every piece [in the show]. Maybe not the exact story, but something very similar. So it’s very universal.”

“There’s not really a theater company that exists in Austin right now that focuses on teachers, and this is the niche that we were hoping to fill,” Meador says. “We want to celebrate them, we want to advocate for them, and we just want them to try to come out and understand that all this creativity that we have built up inside is [usually] focused on other people. So where does it go for us? It’s all in here by the end of the year – I’m pointing to my chest, by the way – and we have to have a way of letting it out for us. So that’s hopefully what we’re here for – that they can come out and just be creative for themselves.”

Meador feels that Teacher Confessions is being performed in an ideal setting: a former school cafetorium. “It could not be more perfect,” she says. “Yeah, Alamo Drafthouse… bought the Baker School, and it’s literally what used to be a school in AISD. So they have opened up the cafetorium to us on July 30 and July 31, so we’re going to have like a full-on adult night, but in a cafetorium!”

‘Teacher Confessions’ will be performed July 30 and 31 at the Baker School.