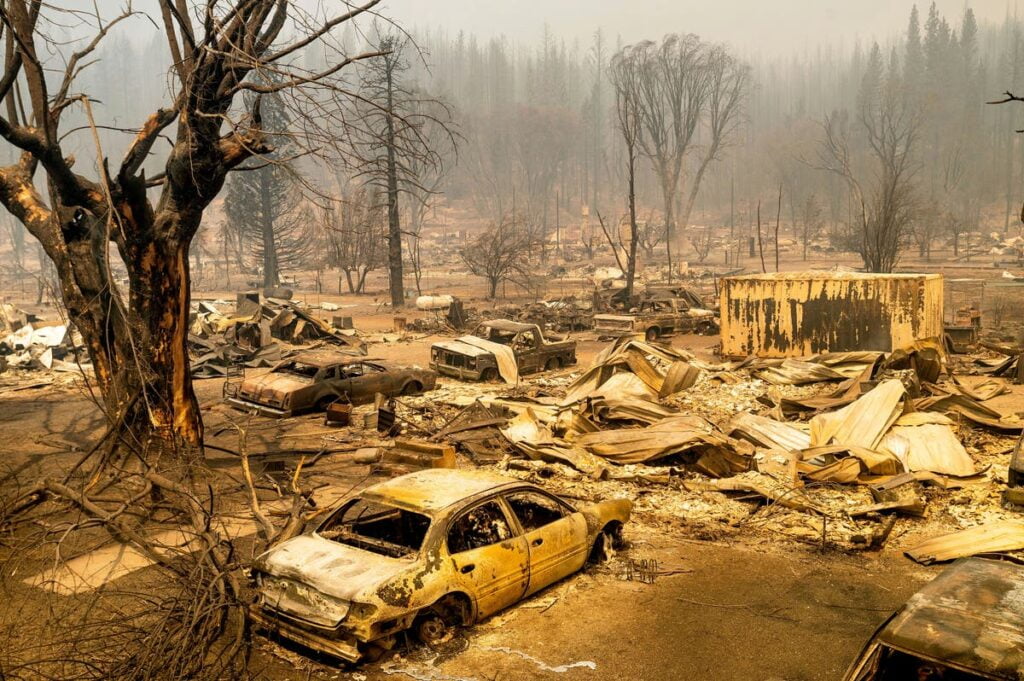 ETHIOPIA-TIGRAY CRISIS-RIVER CORPSES — From time to time, a body floating down the river separating Ethiopia’s troubled Tigray region from Sudan was a silent reminder of a war conducted in the shadows. But in recent days, the corpses became a flow, raising fresh fears about atrocities in the least-known area of the nine-month Tigray war. By Mohaned Awad and Cara Anna. SENT: 1,170 words, photos.

WESTERN WILDFIRES — Eva Gorman says the little California mountain town of Greenville was a place of community and strong character, the kind of place where neighbors volunteered to move furniture, colorful baskets of flowers brightened Main Street, and writers, musicians, mechanics and chicken farmers mingled. It all turned to ashes as the state’s largest wildfire raged through the Gold Rush-era town, wiping out the historic town and leveling more than 100 homes. By Christopher Weber and Noah Berger. SENT: 700 words, photos, videos.

GREECE-FIRES — Thousands of residents flee to safety from a wildfire that burned for a fourth day north of Athens, during an overnight battle to stop the flames reaching populated areas, electricity installations and historic sites. By Derek Gatopoulos and Elena Becatoros. SENT: 460 words, photos. Also see TURKEY-WILDFIRES-VOLUNTEERS below.

CONGRESS-INFRASTRUCTURE — Nearing decision time, senators were struggling to wrap up work on the bipartisan infrastructure plan despite hopes to expedite consideration and voting on the nearly $1 trillion proposal. The package hit a snag as lawmakers worked late into the night on amendments. A procedural vote was set for Saturday. By Kevin Freking and Lisa Mascaro. SENT: 990 words, photos.

IOC-BELARUSIAN COACHES — Two Belarus team coaches have been removed from the Olympics, four days after they were involved in trying to send sprinter Krystsina Tsimanouskaya back to their country. The International Olympic Committee says it has canceled and removed the credentials of Artur Shimak and Yury Maisevich. SENT: 280 words, photos. With TOKYO-OLYMPICS-THE-LATEST.

BRITAIN-OLYMPIC-DEFECTOR — When boxer Thomas Essomba walked out of the London Olympic Village with his suitcases in 2012, he left behind his life in Cameroon to start another one from scratch in a country he knew next to nothing about. The stories of young athletes who defect during the Olympics often capture the world’s imagination. This week, Belarusian sprinter Krystsina Tsimanouskaya left the Tokyo Games and sought refuge in Poland. By Sylvia Hui and Tristan Werkmeister. SENT: 830 words, photos.

JAPAN-HIROSHIMA ANNIVERSARY — Hiroshima marks the 76th anniversary of the world’s first atomic bombing, as the mayor of the Japanese city urged global leaders to unite to eliminate nuclear weapons, just as they are united against the coronavirus. By Mari Yamaguchi. SENT: 600 words, photos.

MORE ON THE OLYMPICS

TABLE-TENNIS-THE-SNAKEMAN-BITES — Adam Bobrow, the Voice of Table Tennis, possesses an arsenal of tricky spin shots, captured on YouTube and watched by millions, that can leave even good opponents gape-mouthed and then, as the wildness of what they’ve seen sinks in, delighted. SENT: 930 words, photos.

VIRUS OUTBREAK-VACCINE MANDATES — Enforcement of new COVID-19 rules in New York City would fall on restaurants and other business owners to check for violations, a development that is being closely watched by other communities. SENT: 860 words, photos.

VIRUS-OUTBREAK-CHINA-VACCINES — Chinese President Xi Jinping pledges 2 billion doses of Chinese vaccines would be supplied to the world through this year, an increase that would add to country’s efforts as the largest global exporter of COVID-19 vaccines. SENT: 500 words, photos. With VIRUS-OUTBREAK-THE-LATEST.

WHAT WE’RE TALKING ABOUT

MILITARY-VACCINES — A former Army lawyer says his Washington firm has received calls from hundreds of service members since President Joe Biden asked the Pentagon to look at adding the COVID-19 vaccine to the shots troops are required to get. SENT: 950 words, photos.

VIRUS OUTBREAK-BIDEN-DESANTIS — The surge of coronavirus cases in Florida this week set off an unusually direct exchange between the White House and Republican Gov. Ron DeSantis. SENT: 1,060 words, photos.

MEXICO-WOMEN-ACID ATTACK — Mexican survivors of acid attacks are organizing to demand justice in these horrific cases where attackers tried to dissolve them physically and intellectually. SENT: 1,130 words, photos.

BRAZIL FOREST FIRES — The season of Brazilian forest fires has begun, and early data plus severe drought is sparking concern that nationwide destruction in 2021 will return to levels seen in the past two years, despite efforts to tamp down the blazes. SENT: 960 words, photo.

DROUGHT-LAKE POWELL — The impact of the megadrought engulfing many parts of the U.S. West reached Lake Powell when water levels recently hit historic lows, closing many ramps, forcing some houseboats off the water and complicating summer plans for visitors. SENT: 1,170 words, photos, video.

ECONOMY-JOBS REPORT — Despite an uptick in COVID-19 cases and a shortage of available workers, the U.S. economy likely enjoyed a burst of job growth last month as it bounced back with surprising vigor from last year’s coronavirus shutdown. By Economics Writer Paul Wiseman. SENT: 590 words, photo. UPCOMING: Report at 8:30 a.m.

FACEBOOK-ACADEMICS-SHUT-OUT — A senior Federal Trade Commission official is criticizing Facebook’s move to shut down the personal accounts of two academic researchers and terminate their probe into misinformation spread through political ads on the social network. By Business Writer Marcy Gordon. SENT: 630 words, photo.

FINANCIAL MARKETS — Asian stock markets were mixed after Wall Street rose to a record high as investors waited for U.S. jobs data for an update on how coronavirus flareups are affecting the biggest global economy. By Business Writer Joe McDonald. SENT: 390 words, photos.

KANE-GAMBLING-EXPLAINER — Most professional leagues bar their players from gambling on the outcome of their games — or any of those in the league. They also have protocols for investigating them. By Hockey Writer Stephen Whyno. SENT: 1,100 words, photos.