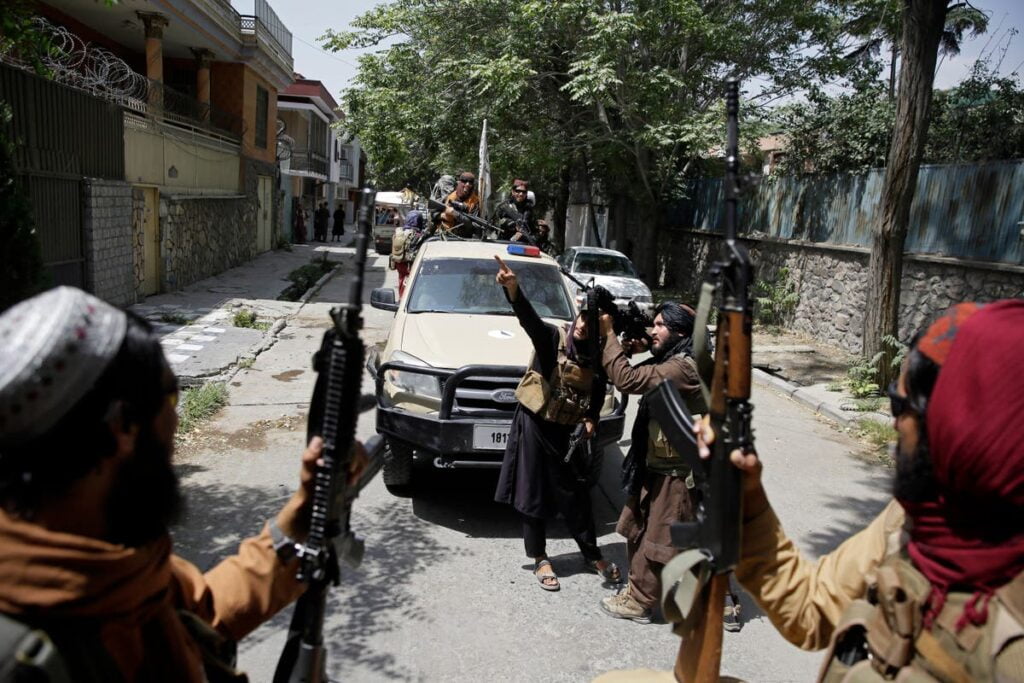 AFGHANISTAN — A panicked crush of people trying to enter Kabul’s international airport killed seven Afghan civilians in the crowds, the British military says, showing the danger still posed to those trying to flee the Taliban’s takeover of the country. By Ahmad Seir, Tameem Akhgar and Jon Gambrell. SENT: 810 words, photos.

VIRUS-OUTBREAK — Japan, Australia and New Zealand all got through the first year of the coronavirus pandemic in relatively good shape — but now are taking diverging paths in dealing with new outbreaks of the fast-spreading delta variant. The difference in emphasis on lockdowns and vaccines could have far-reaching consequences for the economies of those nations and the health of their citizens. By Nick Perry, Mari Yamaguchi and Rod Mcguirk. SENT: 1,180 words, photos. With VIRUS-OUTBREAK-THE-LATEST.

GREECE-WILDFIRES-RESIN-COLLECTORS — Residents in the north of the Greek island of Evia have made their livings from the dense pine forests surrounding their villages for generations. Tapping the pine trees for resin has been a key source of income for hundreds of local families. But hardly any forests are left after one of Greece’s most destructive single wildfires in decades rampaged across northern Evia for days. By Elena Becatoros. SENT: 930 words, photos.

CHINA-AFGHANISTAN — China is facing heightened risks, along with potential political and economic opportunities following the Taliban’s rapid rise to power. China shares a narrow remote, border with Afghanistan and has long hoped for a reduction of U.S. influence in the area. But the Taliban’s core philosophy is diametrically opposed to Beijing’s vision of atheist rule under the Communist Party that holds social stability and economic development above all. SENT: 1,000 words, photos.

VIRUS-OUTBREAK-CRUISES — A cruise ship headed for the Mexican Riviera set sail from the Port of Long Beach — the first cruise ship to depart from California in 17 months. SENT: 340 words, photos.

VIRUS-OUTBREAK-JESSE JACKSON — The Rev. Jesse Jackson a famed civil rights leader and two-time presidential candidate, and his wife, Jacqueline, have been hospitalized after testing positive for COVID-19, according to a statement. SENT: 190 words, photos.

VIRUS-OUTBREAK-RADIO-HOST — A conservative talk radio host from Tennessee who had been a vaccine skeptic until he was hospitalized from COVID-19 has died. He was 61. SENT: 300 words, photos.

UKRAINE-CRIMEAN-TATARS — Russia’s annexation of of Ukraine’s Black Sea peninsula in 2014 evoked tragic memories for Crimean Tatars. Seventy years earlier, Soviet dictator Josef Stalin ordered the mass deportation of their people. Fears of more discrimination and persecution following the Russian takeover have materialized. Some Crimean Tatars have been convicted of extremist charges and sentenced to prison terms ranging from eight to 19 years. The fate of the Muslim ethnic group is one of top issues during an inaugural meeting Monday of the Crimean Platform, an international forum called by Ukraine to build up pressure on Russia. SENT: 1,090 words, photos.

ROMANIA-LGBT-RIGHTS — The 20th anniversary of the decriminalization of homosexuality in Romania provided cause for celebration during the gay pride parade and festival held in Bucharest this month. People danced, waved rainbow flags and watched performances at an event that would have been unimaginable a generation earlier. Yet many members of Romania’s LGBT community remain frustrated by the Central European nation’s failure to go further and legalize same-sex unions or marriages. SENT: 520 words, photos.

WESTERN-WILDFIRES — Crews were digging in and burning out fire lines amid another round of high winds that contributed to the fury to a Northern California wildfire. SENT: 710 words, photos.

BOX–PACQUIAO-UGÁS — Yordenis Ugás beat Manny Pacquiao by unanimous decision. The Cuban champion put on an impressive technical performance on 11 days’ notice and retained his WBA welterweight title. Ugás seized his opportunity as the late injury replacement for Errol Spence Jr.. He frustrated Pacquiao (67-8-2) throughout what might be the final fight of the 42-year-old Filipino senator’s career. By Sports Writer Greg Beacham. SENT: 940 words, photos.