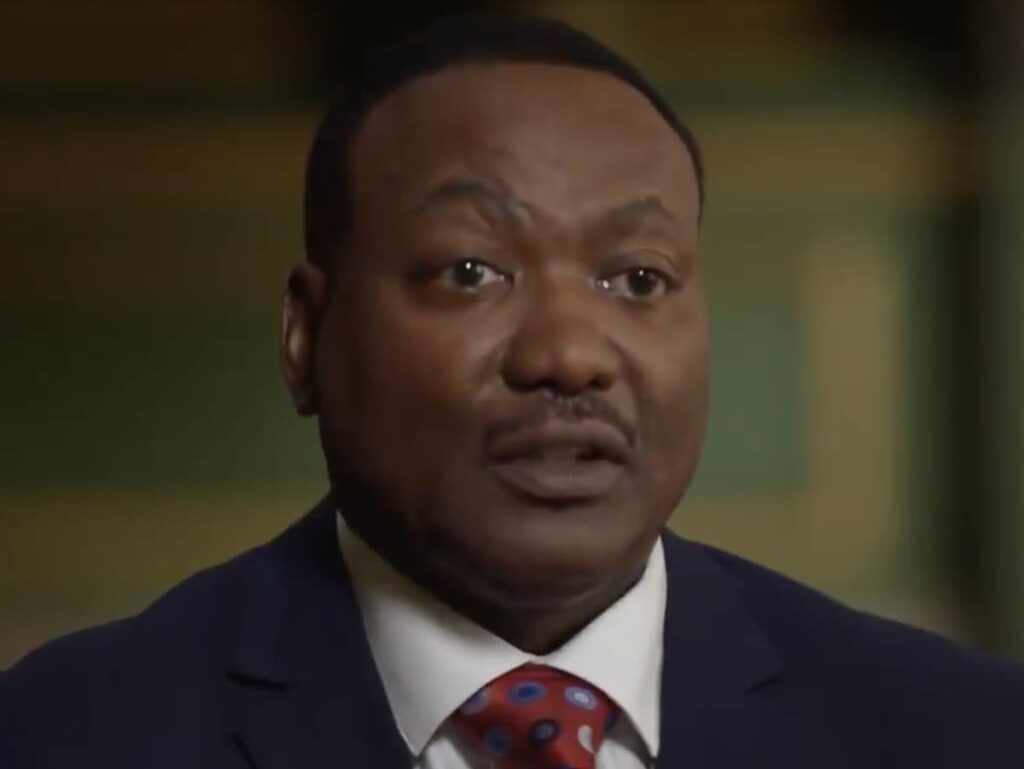 The officer who who fatally shot Trump supporter Ashli Babbitt during the riot inside the halls of Congress on 6 January revealed his identity in a new interview on NBC News on Thursday.

“I know that day I saved countless lives,” Lt. Michael Byrd said, speaking publicly about the shooting for the first time, after authorities previously declined to identify him. “I know members of Congress, as well as my fellow officers and staff, were in jeopardy and in serious danger. And that’s my job.”

Ms Babbitt has emerged as a far-right “martyr” whose name and the phrase “who killed Ashli Babbitt?” has been invoked by GOP lawmakers and former president Donald Trump, who has eulogised her in public remarks and on Fox News, in an apparent effort to deflect from scrutiny into the causes and narrative behind the attack and Republican liability supporting an effort to undermine democracy.

All that made it so when Lt Byrd’s named leaked online, the officer, who is Black, faced a torrent of threats and racist abuse.

“They talked about killing me. Cutting off my head. Very vicious and cruel things,” he said. “There were some racist attacks as well. It’s all disheartening, I know I was doing my job.”

The revelation of his identity comes amid renewed scrutiny of the 6 January riot from all sides.

A lawyer for Ms Babbitt’s family has reportedly named officer Byrd and is crowdfunding a wrongful death lawsuit.

A group of seven Capitol Police officers also filed a lawsuit on Thursday accusing former president Trump, far-right extremist groups and Trump allies of plotting to disrupt the certification of millions of Americans’ votes and subvert the outcome of the presidential election.

The lawsuit follows recent testimony of several officers to the House Select Committee to probe how the Trump-era White House and federal law enforcement planned its response to the attack, and how the administration fed into the movement that propelled it.

The family of Ms Babbitt – an Air Force veteran who amplified QAnon- and election-related conspiracy theories on social media before she travelled to Washington DC to participate in the riot – has also threatened a $10m wrongful death lawsuit and demanded records related to the attack, including the identity of the officer who killed her.

The Washington police officer who fatally shot Ashli Babbitt, a Trump supporter who became a martyr in right-wing circles after dying during the 6 January Capitol riot, says he had to go into hiding once his name was leaked.

Lt. Michael Byrd, a 28-year veteran of the US Capitol police is Black, and said he faced a torrent of racist abuse once his identity made its way onto conservative media sites. I’ve got more details here.

The US Capitol Police officer who fatally shot Ashli Babbitt during the Capitol riot on 6 January has revealed his identity during his first interview following the assault on Congress.

Lt Michael Byrd, who guarded glass doors leading to a lobby outside the House of Representatives, where lawmakers and staff were huddled, told NBC Nightly News with Lester Holt that his single shot “saved countless lives.”

“I know members of Congress, as well as my fellow officers and staff, were in jeopardy and in serious danger,” he told the network in an interview aired on 26 August. “And that’s my job.”

The Independent’s Alex Woodward has the latest ahead of the blockbuster interview.

Washington DC Metropolitan Police Department officer Michael Fanone told The Daily Beast that he was among a group of people supporting the US Capitol Police officer who fatally shot Ashli Babbitt during his interview with NBC, to air tonight.

“He’s a hero to me,” he told the publication. “I’m incredibly humbled to have been able to be there to support him this morning [during the taping of the interview]. I don’t even have the words to describe how difficult this is for him and his family… He is essentially sacrificing himself at the altar of our democracy today in pursuit of the truth.”

Coming up on NBC Nightly News with Lester Holt: The US Capitol Police officer who fatally shot Ashli Babbitt will speak publicly for the first time.

The programme is leading with a report on the ISIS-K blast in Kabul that killed more than 60 people including 12 US service members.

The latest Capitol rioter to be indicted by federal prosecutors faces a range of charges, including assaulting a police officer outside the Capitol building.

According to prosecutors, Ryan Samsel, wearing a “Make America Great Again” cap, pushed down barricades and knocked officers down in the process. One officer lost consciousness. “We don’t have to hurt you, why are you standing in our way?” Mr Samsel reportedly said.

The officer was transported to an emergency room and treated for a concussion, prosecutors said.

Mr Samsel then allegedly tried to pull a shield away from another officer.

Trump and others issued summonses in Capitol police lawsuit

Court summonses have been issued to Donald Trump and his allies and far-right groups targeted in a lawsuit from a group of US Capitol Police officers.

If they do not respond to the complaint within 21 days, they may face a default judgment for relief.

Maryland attorney Terry Roberts, who has accused the officer who fatally shot Ashli Babbitt of “ambushing” her as she broke into the House chambers, has reportedly named the officer, as the family crowdfunds a wrongful death lawsuit seeking $10m.

The attorney’s announcement arrived hours before the US Capitol Police officer will speak publicly for the first time in an interview to air on NBC News on Thursday night.

Following an announcement from Capitol Police that the officer will not be disciplined, an attorney representing the officer said that “every piece of evidence that is released further validates the Lieutenant’s conduct. The Lieutenant exercised professionalism and restraint in heroically defending and protecting members of Congress and their staff during the violent insurrection on January 6th.”

Officer to reveal himself in televised interview, prompting warnings that exposure could revive right-wing threats

The US Capitol Police officer who fatally shot Ashli Babbitt will publicly reveal his identity following attempts among federal law enforcement to limit his exposure in the wake of “numerous credible and specific threats” of violence against him and others by far-right figures.

His pre-taped interview to air on Thursday has drawn criticism reviving those warnings.

“I am intrigued and slightly concerned,” former FBI assistant director Frank Figliuzzi told MSNBC. “I’m monitoring communications from violent extremists – they want this guy, they want to find out who he is, many of them already know … I’m intrigued why he feels now he needs to come forward and explain his actions.”

After he was cleared by federal law enforcement and Capitol police, finding that his actions fell within the agency’s use of force policies, “he needs to convey that,” Mr Figliuzzi added. “And we need to hear from him as to exactly what he found to be an imminent threat to life or seriously bodily harm to him [and others].”

A former FBI director has knocked back Donald Trump’s claims that “executive privilege” will protect him from an investigation by the House Select Committee on the 6 January attack.

Speaking on CNN, former FBI deputy director Andy McCabe said that the scale of the committee’s request meant that any attempt to block it by citing executive privilege would be a tall order.

Nine pro-Trump lawyers who participated in a Michigan lawsuit to overturn 2020 election results will face financial penalties and could even be disbarred, a federal judge has ruled.

US District Judge Linda Parker said the suit “represents a historic and profound abuse of the judicial process.”