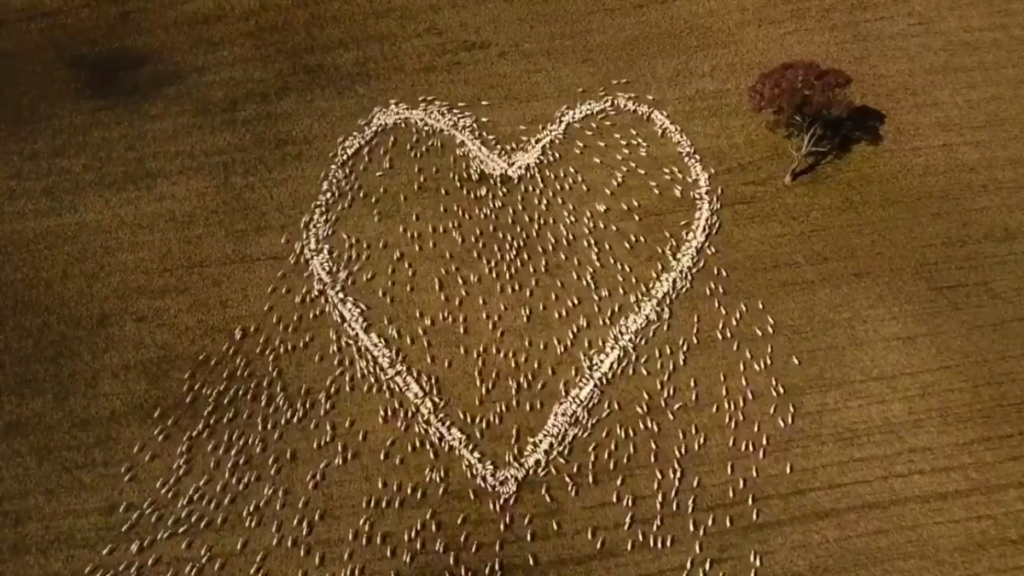 An Australian sheep farmer who was unable to attend his aunt’s funeral due to Covid-19 restrictions, found a unique way to bid her goodbye.

Ben Jackson, who lives in a town in New South Wales, felt “helpless” when he was not able to visit his aunt in Brisbane who died battling cancer.

“I sort of felt a bit helpless, a bit stumped about how I could show my affection and love for my dear aunty Deb,” he was quoted as saying by The Sydney Morning Herald.

Mr Jackson herded his sheep into a giant heart formation to celebrate his love for his aunt.

“I just hope that when I did it, Debbie took one eye off from having a yarn with her loved ones up there and looked down and saw my heart for her,” he said.

But the display of affection took several attempts and “guesswork” to form the outline with cattle. He scattered grains in the shape of a heart and released his flock.

The emotional tribute was captured on video by a drone and has since gone viral on social media.

Mr Jackson shared the video on Instagram on Tuesday, saying: “I made this for my Aunty Deb. We said goodbye yesterday. I hope you had a peep down and saw this from up there. Bridge over Troubled Water by Simon and Garfunkel was one of her favourite tunes.”

The video was played at her aunt Deb Cowdery’s funeral along with her favourite track. Several people were emotional during the funeral, said the report.

But he never thought it would happen to him one day. Mr Jackson said he is not a “grief expert” but he was strongly affected by it.

Mr Jackson, who has been doing “sheep artwork” for a while and capturing it on his drone, said her aunt would be proud to see so many people enjoying and loving his effort.