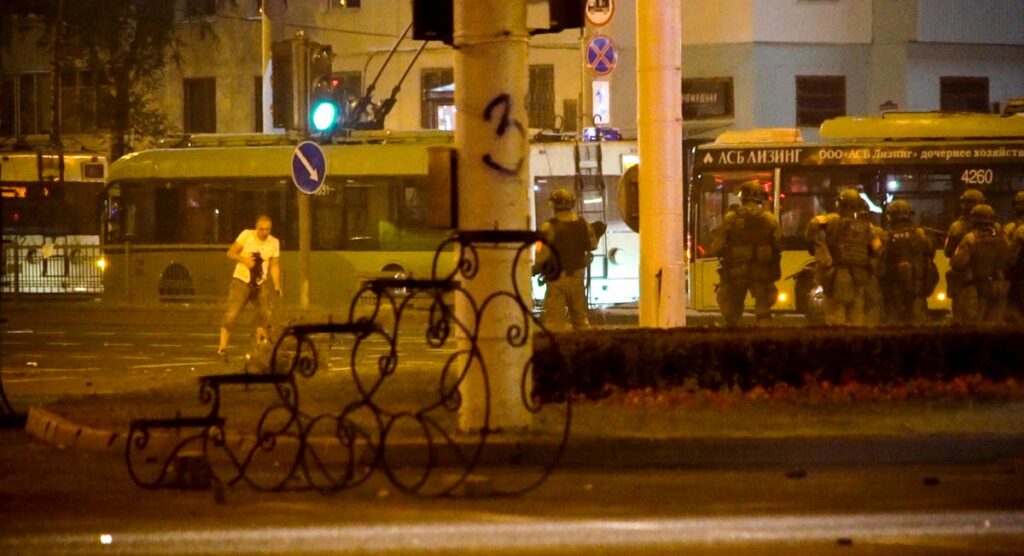 Belarusian authorities long ago removed the makeshift memorial to a protester shot by police at the start of last year’s massive protests against the country’s autocratic president, replacing flowers and placards with a garbage can.

Alexander Taraikovsky died as protests swelled, a day after President Alexander Lukashenko s reelection to a sixth term in the Aug. 9, 2020, presidential vote that the opposition denounced as rigged. Police dispersed the peaceful demonstrators with rubber bullets, stun grenades and clubs in a stunningly brutal crackdown.

Lukashenko earned the nickname of “Europe’s last dictator” in the West for his relentless repression of dissent since taking the helm in 1994. But when last year’s protests presented him with an unprecedented challenge, he responded with an unusual ferociousness. That turned out to be the opening salvo in a year of intense repression, the most shocking example of which was the arrest of a journalist after his flight was forced to divert to Belarus.

Authorities first claimed that Taraikovsky, 34, was killed when an explosive device he intended to throw at police blew up in his hands, but Associated Press video showed that he had no explosives when he fell to the ground. Officials later acknowledged that Taraikovsky might have been killed by a rubber bullet. But they never opened an inquiry.

“It was a premeditated murder, but they don’t want to recognize it,” Taraikovsky’s partner, Elena German, told The Associated Press in a telephone interview from Minsk Belarus’ capital.

“There is no law. We haven’t yet received a formal refusal to open a criminal case, so we can’t even appeal,” she said. “They didn’t even return the clothes Sasha (Taraikovsky) was wearing when he left home on that day.”

Even as Belarusian authorities responded with mass arrests and beatings, peaceful demonstrations, some of which drew up to 200,000 people, continued for months. Eventually, relentless repressions — and winter weather — took their toll, and the protests withered. Opposition leaders have been either jailed or forced to leave the country, and authorities have moved methodically to stamp out any sign of dissent.

People were regularly arrested simply for putting the opposition’s red-and-white flag in their windows or even for dressing in red-and-white colors. In December, two people were handed two-year prison sentences for writing, “We will not forget!” on the pavement where Taraikovsky was killed.

“I think our main mistake was that we underestimated the cruelty of the regime,” Sviatlana Tsikhanouskaya the main challenger to Lukashenko in last year’s election, told The Associated Press in an interview in Vilnius, Lithuania earlier this week. “We believed maybe that if there were hundreds of thousands of people in the streets, the regime would at least hear people.”

The West has refused to recognize the election and sanctioned Belarusian officials it accuses of involvement in vote-rigging and the crackdown.

Western powers further ramped up pressure on Belarus after it diverted a passenger plane in May that was flying from Greece to Lithuania and ordered it to land in Minsk, where authorities arrested dissident journalist Raman Pratasevich.

Lukashenko alleged there was a bomb threat against the flight and that is why it was diverted. But the European Union called it air piracy and barred Belarusian carriers from its skies and cut imports of the country’s top commodities, including petroleum products and potash, a common fertilizer ingredient.

A furious Lukashenko retaliated by tossing an agreement with the EU on countering illegal migration. Officials in neighboring Lithuania accused Belarusian authorities of encouraging thousands of migrants, most of them from Iraq, to cross into its territory as part of their “hybrid war” against the West.

In the latest drama to seize the world’s attention, Belarusian Olympic sprinter Krystsina Tsimanouskaya fled to Poland this week, saying she feared reprisals back home after a dispute with her coaches at the Tokyo Games.

After a year of relentless repressions, public protests are nearly impossible to organize, but opposition leaders remain confident that Lukashenko’s rule is doomed.

“The system is rotten,” said Tsikhanouskaya, who left for Lithuania under pressure a day after last year’s election. “It’s already impossible to make this system monolithic again because so many people … really want changes.”

Tsikhanouskaya suggested that the country’s growing isolation could help raise pressure on the country’s elite — and even make them join the cause against Lukashenko.

But some analysts cautioned that Lukashenko could hold out for some time.

“Western sanctions inflict significant pain on the Belarusian regime by hitting its economic foundation,” said Artyom Shraybman, head of Sense Analytics, an independent analysis firm. “But such regimes can exist in international isolation because they are capable of distributing whatever scarce resources they have to the benefit of armed services.”

“The goal behind the latest wave of repressions is to show the West that sanctions don’t work, and repressions against civil society will only escalate in response to sanctions,” argued Shraybman, who was forced to leave Belarus fearing arrest.

Indeed, Belarusian authorities in recent weeks have escalated their crackdown on independent journalists, civil society activists and others whom they consider disloyal or suspicious. Lukashenko denounced the activists as “bandits and foreign agents” and vowed to continue what he called a “mopping-up operation” against them.

A total of 29 Belarusian journalists are currently in custody, serving their sentence or awaiting trial. More than 50 NGOs are facing closure, including the Belarusian Association of Journalists, the biggest and most respected media organization in the country, and the Belarusian PEN Center, an association of writers led by Svetlana Alexievich, the winner of the 2015 Nobel Prize in literature.

Andrey Dynko, a journalist from the Nasha Niva online newspaper that was shut by authorities, spent 13 days in prison in gruesome conditions.

“I feel like I came back from the abyss,” Dynko told the AP in a telephone interview from Minsk. “I have an item that I cherish most now — a plastic bottle that I drank from, used to wash myself and slept on instead of a pillow for 13 days.”

German, Taraikovsky’s partner, said that she has “learned to be strong” over the past year but acknowledged that she has little hope and energy left.

“Many of my acquaintances have gone abroad, and, frankly speaking, I have a similar desire,” said German, who has two daughters. “I don’t see any future for my children here, and I don’t want them to be educated through propaganda.”

Amid the growing Western pressure, Lukashenko has relied on political and financial support from Russia, Belarus’ main sponsor and ally. The Kremlin has provided Belarus with a $1.5 billion loan to keep its Soviet-style economy afloat and strongly condemned Western sanctions.

Independent analyst Valery Karbalevich said that while the Russian money has buttressed Lukashenko’s rule for now, the broad discontent smolders and could spill over at any moment.

“It’s quite obvious that Lukashenko has lost the support of the majority of the country’s urban population, and the protest sentiments were stifled by repressions but didn’t disappear,” Karbalevich said.

Vladimir Isachenkov and Tanya Titova in Moscow and Liutauras Strimaitis in Vilnius, Lithuania contributed to this report.