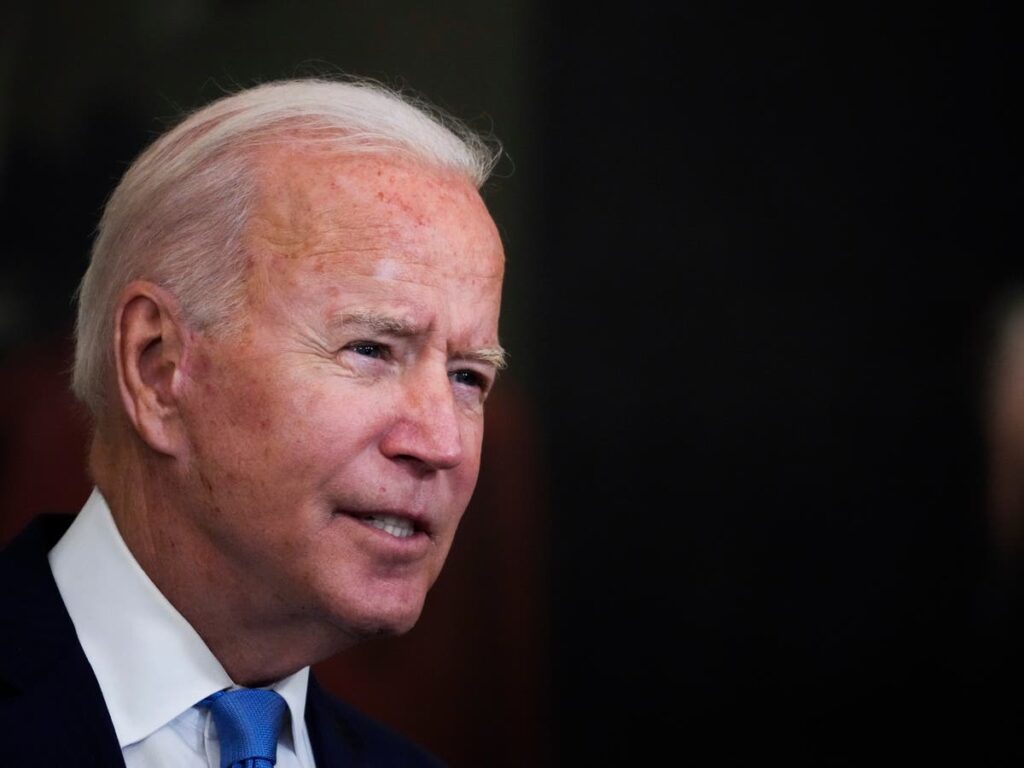 President Joe Biden expressed some openness to extending the United States’ mission in Afghanistan, saying that the 31 August exit date was contingent on the Taliban’s cooperation.

Mr Biden made the remarks after saying he met on Tuesday with his counterparts in the G7, the United Nations, the European Union and NATO.

“We are currently on pace to finish by August the 31st,” he said from the White House. “The sooner we finish, the better. Each day of operations brings added risk to our troops.”

The president also warned about the threat of the Islamic State in Khorasan, or Isis-K, which is also an enemy of the Taliban.

“Every day we’re on the ground is another day we know that Isis-K is seeking to target the airport, and attack both US and allied forces and innocent civilians,” he said.

“But the completion by August 31 depends upon the Taliban continuing to cooperate and allow access to the airport for those who are transporting out and no disruption to our operations,” Mr Biden added.

The president revealed that he has asked the Pentagon and the State Department to adjust the timetable for withdrawal should that become necessary.

“I’m determined to ensure that we complete our mission,” he said. “I’m also mindful of the increasing risks that I’ve been briefed on and the need to factor those risks in. They’re real and significant challenges that we have to take into consideration.”

“There’s been no change to the timeline of the mission, which is to have this completed by the end of the month,” Mr Kirby said in a news conference.

But UK Prime Minister Boris Johnson has demanded that the Taliban ensure safe passage past the 31 August deadline and pushed for Mr Biden to extend the deadline, along with allies including French President Emmanuel Macron and German Chancellor Angela Merkel.

After the G7 call, White House press secretary Jen Psaki reiterated the plan to leave by the set deadline.

“He also made clear that with each day of operations on the ground, we have added risk to our troops with increasing threats from ISIS-K, and that completion of the mission by August 31st depends on continued coordination with the Taliban, including continued access for evacuees to the airport,” she said in a statement. “In addition, the President has asked the Pentagon and the State Department for contingency plans to adjust the timeline should that become necessary.”

The evolving situation in Afghanistan, along with a back-and-forth on the president’s domestic agenda, culminated in Mr Biden speaking nearly five hours after he was expected.

But the president was also keen to emphasise domestic policy, touting the passage of a budget resolution and the John Lewis Voting Rights Act.

Moderate Democrats sought to pass an infrastructure bill that cleared the Senate earlier this month before moving on to a budget resolution that would begin the process to pass a $3.5 trillion spending bill that would expand child care, care for elderly people and people with disabilities, expansion of Medicare benefits and other big-ticket items.

“There were differences, strong points of view,” he said. “They are always welcome.”

But the president still faces sinking approval ratings. A new poll from USA Today and Suffolk University found Mr Biden’s approval rating at 41 percent and his disapproval ratings are at 55 percent. The same poll, which was conducted from Thursday through Monday, also said 3 in 4 Americans think Afghanistan will again become a safe haven for terrorism as it was when the war began.

As the same time, only seven percent of people who said the war was not worth it blamed Mr Biden, while two-thirds blame former president George W Bush.

Former president Donald Trump railed against Mr Biden in a statement shortly after his remarks.

“How dare Biden force our Military to run off the battlefield in Afghanistan and desert what now have become many thousands of American hostages,” he said. “We had Afghanistan and Kabul in perfect control with just 2,500 soldiers and he destroyed it when it was demanded that they flee!”

“I think it’s possible but I think it’s very unlikely given the number of Americans who still need to be evacuated,” he said, as well as special immigration visa applicants, members of the Afghan press, women leaders and civil society leaders.