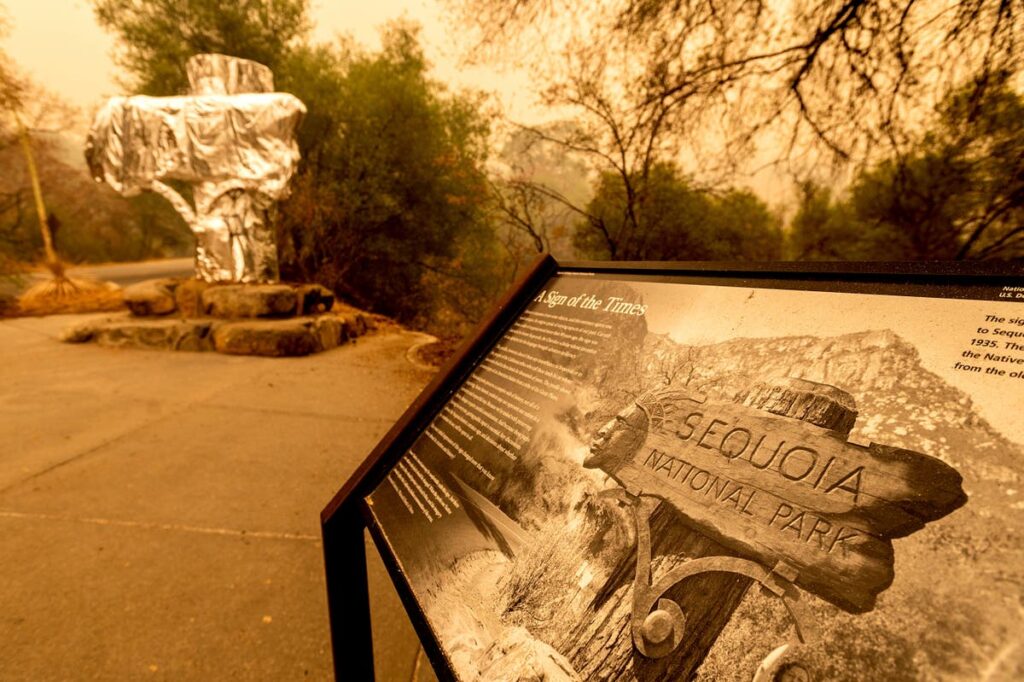 Fire crews in California have wrapped the base of the world’s largest tree in a thick blanket of aluminium foil in the hope of saving it from a raging wildfire.

The massive KNP Complex fire is tearing through Sequoia National Park, threatening its forest of ancient sequoias including the 275ft General Sherman. The largest tree on the planet by volume, it has a ground circumference of 103ft.

Fire service officials have also wrapped the Giant Forest Museum and other buildings in the park in foil to protect them from the flames, National Park Service spokesperson, Rebecca Paterson, said.

The heat-resistant metal sheets, which help trees and structures withstand intense heat for short periods, have been deployed for several years by US officials.

Local businesses in the area shared pictures which showed fire crews wrapping wooden signs and trees. Sequoia National Park was closed to visitors earlier this week as the fire continued to encroach.

Nearly 500 personnel have been deployed to tackle the blaze, according to government data.

“Fires are burning in both Sequoia National Park and Sequoia National Forest, putting the areas off-limits to visitors for now. These are rapidly evolving situations with crews working hard to reduce the fires’ impacts on our beautiful giant sequoias,” tweeted Visit Visalia, a tourism platform in the region.

Two separate blazes – the Colony and Paradise fires – are currently burning in the park. The Colony fire is likely to reach a giant forest of 2,000 sequoia trees within days, fire officials said.

It has been a long summer of overlapping wildfires in California and other western states. Some 77 large fires are burning across the US, destroying nearly 3.2 million acres.

Active fire behaviour has been reported on large fires in California, Oregon, Montana, Idaho, Wyoming and Oklahoma, according to the National Interagency Fire Center.

The Paradise fire is burning in an area of steep inclines, meaning fire crews only have limited access on the ground to douse the flames. They have resorted to extensive aerial water and flame-retardant drops on both fires.

However, there has been some respite for firefighters as the complex has not grown significantly in the past 24 hours, fire spokesperson Katy Hooper said.

Last year, thousands of sequoia trees – some of which have stood for thousands of years and have grown as tall as highrise apartment blocks – were reduced to ash by a wildfire.

Giant sequoias have adapted to smaller fires, that have long been part of California’s natural landscape, and thrive in such conditions. Controlled fires allow the trees to release seeds from their cones and clear vegetation to allow young sequoias to grow.