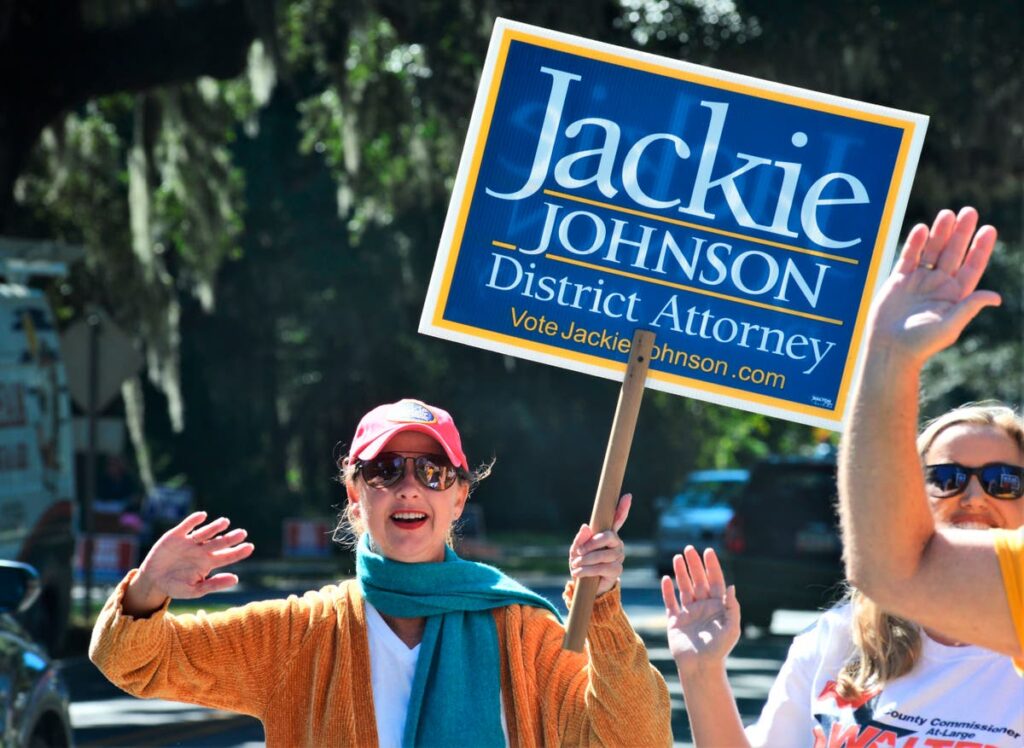 A former Georgia prosecutor who handled the case of Ahmaud Arbery, a Black man who was gunned down while out jogging, was indicted on Thursday for using her position to shield the two accused men from being charged.

Former Brunswick judicial circuit district attorney Jackie Johnson was charged with misconduct on a felony count for violating her oath of office and hindering a law enforcement officer.

Ms Johnson was charged with showing “favour and affection” toward one of the accused in the investigation, who had worked in her office till 2019, reports said. She has also been indicted for interfering with police officers at the scene, by issuing orders against the arrest of the man who shot down Arbery.

Ms Johnson’s indictment followed a probe by Georgia’s attorney general Chris Carr, after a video showing the accused chasing and killing Arbery and the delay in charging them sparked high-voltage protests nationwide.

The US Department of Justice investigated Arbery’s killing as a possible hate crime.

Greg and Travis McMichael, the accused father and son, both white, chased 25-year-old Arbery in their neighbourhood outside the coastal city of Bruncswick in February 2020 and shot him dead.

They were captured in a video by their neighbour William “Roddie” Bryan, who joined the chase in shooting Arbery with a shotgun at close range.

The McMichaels claimed Arbery was a burglar and shot him for allegedly attacking Travis.

The two were not charged with any crime and were free for more than two months, until cellphone video of the shooting surfaced online, prompting severe public backlash against what was seen as a racial hate crime.

Stating that the case was not closed after Ms Johnson’s indictment, Mr Carr said: “While an indictment was returned today, our file in not closed, and we will continue to investigate in order to pursue justice.”

Cooper Jones’s attorney Lee Merritt said prosecutors “must be held accountable when they interfere with investigations in order to protect friends and law enforcement.”

The case was handed to the Georgia Bureau of Investigation by the state’s governor Brian Kemp.

Prosecutors said an unarmed Arbery was jogging in the neighbourhood and was shot by Mr Travis. No evidence suggests Arbery committed a crime, they added.

The McMichaels and Bryan were charged with murder and other crimes in May 2020 and now face a trial this fall.

Soon after the shooting, Greg McMichael, who worked as an investigator in Johnson’s office till 2019, called the prosecutor and left her a voice message, according to the evidence in pretrial hearings.

“Jackie, this is Greg. Could you please call me as soon as you possibly can? My son and I have been involved in a shooting and I need some advice right away,” according to the call recording in the public case file. Greg McMichael’s phone records, however, do not show her calling him back.

Ms Johnson previously maintained she did not do anything wrong and immediately recused herself from the case due to the involvement of a former employee.

She went on to fight her re-election for Brunswick district attorney, but lost to independent candidate Keith Higgins. She blamed her loss on the controversy surrounding Arbery’s killing. Shortly after, she said people will understand that her office did “what it had to under the circumstances.”

(With additional inputs from agencies)