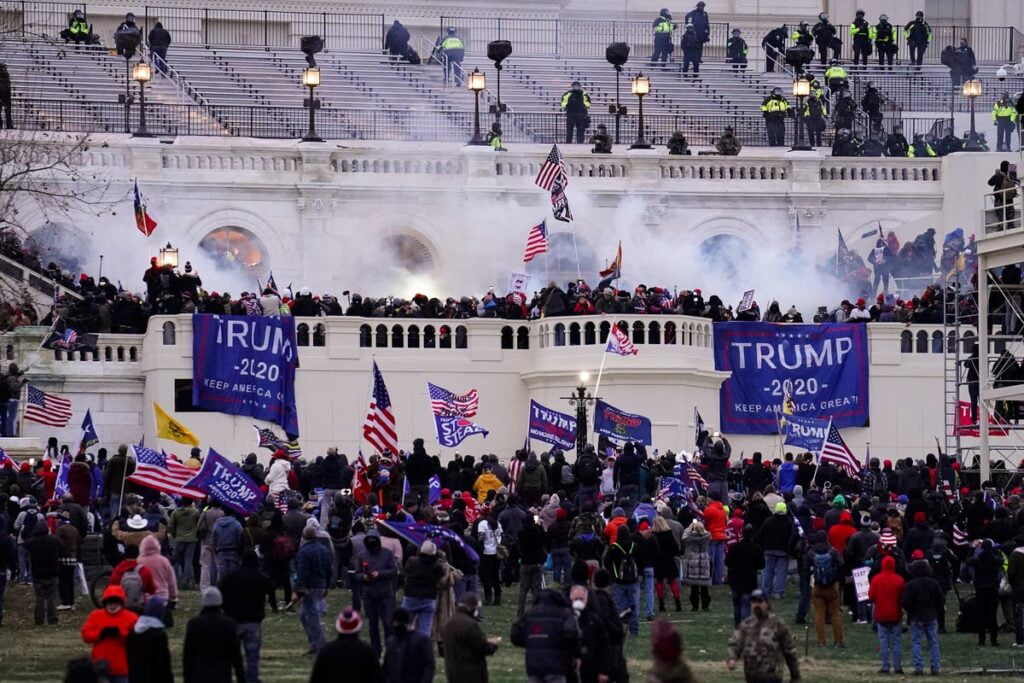 The House committee investigating the Jan. 6 insurrection poked another hole in the pro-Trump conspiracy theory that federal agents orchestrated the attack, confirming on Tuesday that a man at the center of the claims said he’d never been an FBI informant.

Ray Epps, an Arizona man who was filmed encouraging others to enter the U.S. Capitol, testified that he wasn’t “employed by, working with, or acting at the direction of any law enforcement agency on Jan. 5th or 6th or at any other time,” the committee tweeted on Tuesday.

The committee issued its statement after numerous Republican lawmakers highlighted the fringe theory in recent weeks, including Texas Sen. Ted Cruz in a Senate Judiciary Committee hearing on Tuesday. Pressed by Cruz, a Justice Department official said she couldn’t say whether FBI agents participated in the insurrection because she couldn’t discuss “the specifics of sources and methods” of the FBI.

Meanwhile, the evidence indicates the mob that invaded the Capitol on Jan. 6 was overwhelmingly made up of Trump supporters who wanted to help the then-president.

Here’s a closer look at the facts:

CLAIM: Ray Epps, who was filmed on Jan. 5 and 6 urging rioters toward the U.S. Capitol, is a federal agent who helped to orchestrate the insurrection.

THE FACTS: There’s no evidence to support that Epps — who has not been arrested or charged in connection with the Jan. 6 riot — was anything but a disgruntled supporter of former President Donald Trump, like thousands of others who descended on the Capitol that day.

The Jan. 6 committee says Epps testified that he wasn’t working for law enforcement, and at this point, no convincing evidence has been provided linking him to federal agents.

Public records show Epps appears to be a 60-year-old Queen Creek, Arizona, business owner. He also appears to have been affiliated in the past with the Oath Keepers, a national militia group, in Arizona. A YouTube video posted by the group in 2011 lists Epps as the “Oath Keepers Arizona Chapter President,” while a man resembling Epps appears in the footage.

The FBI at one point included an image of Epps on a “wanted” list seeking information about those involved in Capitol violence, then deleted the reference in July. But there are plenty of reasons the FBI might remove individuals from the site, including if it no longer needed help locating them or had already interviewed them.

The theory that Epps was an undercover FBI agent grew from a video that circulated on far-right message boards days after the insurrection. It showed Epps on the evening of Jan. 5, urging Trump supporters around him to “peacefully” enter the Capitol the next day.

That video and others of Epps talking to rioters outside the Capitol building ricocheted across social media for months until Rep. Thomas Massie, a Republican from Kentucky, shared the footage in a congressional hearing in October.

Massie asked Attorney General Merrick Garland why the man in the videos hadn’t been charged, and whether federal agents were involved in the riots. Garland said he couldn’t comment on an ongoing federal investigation, per FBI policy, causing claims about Epps to snowball.

The theory was amplified by Revolver News, a fringe news site founded by a former Trump administration speechwriter who lost his job after speaking at a 2016 conference attended by white nationalists. The site claimed that the FBI posting, then removing, an image of Epps from a “Capitol Violence Most Wanted List” showed he was a “Fed-Protected Provocateur” who “Appears To Have Led” the Jan. 6 attack.

That’s not proof the man was a federal agent — and there’s no reason right now to believe that any undercover agent galvanized a mob of Trump supporters, many of whom were vocal about their intentions, to attempt to delay the congressional certification of Joe Biden’s presidential win.

In fact, an AP review of social media posts, voter registrations, court files and other public records for more than 120 people either facing criminal charges or identified in footage from Jan. 6 showed that the mob was overwhelmingly made up of longtime Trump supporters, including GOP officials and donors, far-right militants, white supremacists, off-duty police, members of the military and conspiracy theory adherents.

Revolver News didn’t immediately respond to a request for comment.

Conservative blogs and lawmakers have insisted that Epps not being charged with a crime reveals he must be associated with the FBI. But Epps was among thousands of revelers trespassing on the Capitol grounds, many of whom have not been charged.

Republicans who have promoted the theory, including Rep. Matt Gaetz of Florida, say they’ve asked the FBI and Justice Department for more information about Epps and his involvement in Jan. 6 to no avail. That’s not surprising. Federal law enforcement officials rarely share details about ongoing investigations. Gaetz gave no indication what led him to believe that Epps was working for the FBI but said he finds the agency’s silence to be concerning.

Asked during testimony before Congress whether there was any reason to believe the insurrection was organized by “fake Trump protesters,” FBI Director Christopher Wray, who was appointed by Trump, said the agency had “not seen evidence of that.”

The House committee investigating the Jan. 6 insurrection tweeted on Tuesday that it was aware of claims Epps was an FBI informant, and had interviewed Epps directly.

Epps told an Associated Press reporter that he’d been advised not to comment and referred questions to his lawyer, who said Tuesday evening that he was not available for comment.

This is part of AP’s effort to address widely shared misinformation, including work with outside companies and organizations to add factual context to misleading content that is circulating online. Learn more about fact-checking at AP.