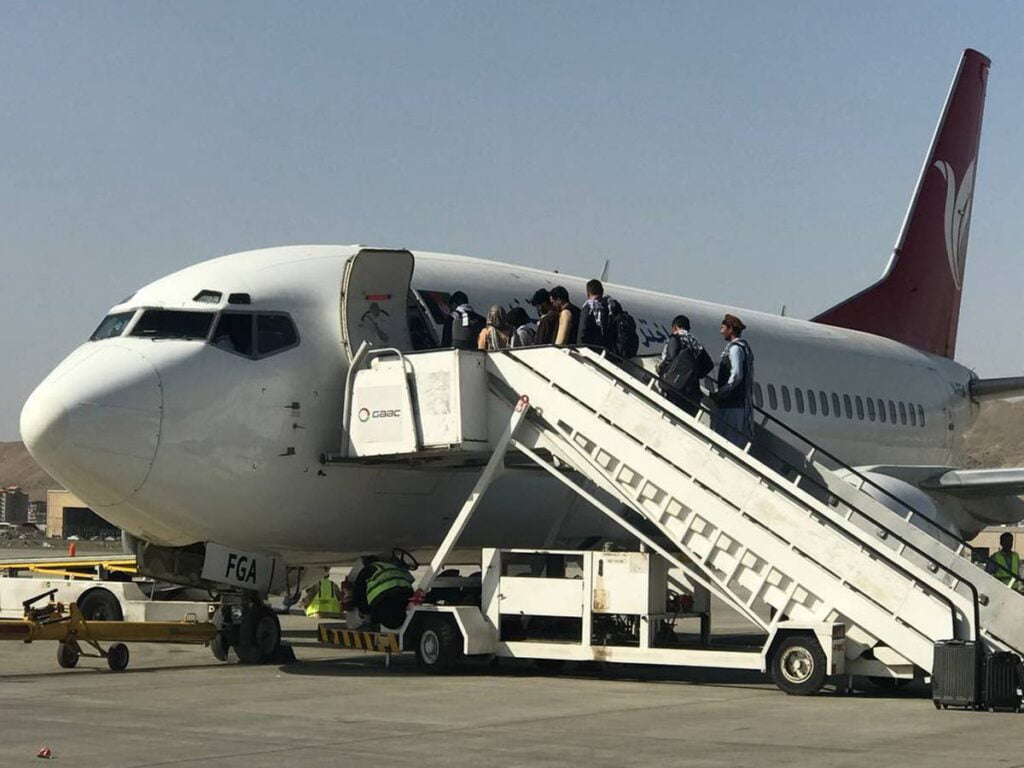 A group of American citizens and were reportedly trapped in the northern Afghan city of Mazar-i-Sharif on Sunday without permission to take off from Taliban officials, as it remains unclear whether the militant group currently has the ability to facilitate international flights.

In a letter to members of Congress from the State Department obtained by CBS News, the agency confirmed that multiple charter flights were waiting to take off from Mazar-i-Sharif’s international airport but had yet to receive permission to do so from local Taliban authorities.

The agency’s letter asserted that the US has no ability to control the airspace over Mazar-i-Sharif, and does not have personnel on the ground in the city to assist. It also characterized the grounding of the flights, numbering at least six according to CBS, as a “decision” made by the Taliban.

“It is a Taliban decision to ground flights in Mazar-i-Sharif,” the email read, according to CBS News. “We are, however, providing guidance and assistance to the extent possible — and with an emphasis on safety— to private entities working out of Mazar.”

The basic details of that report were corroborated by Rep Michael McCaul, the ranking Republican on the House Foreign Affairs Committee, who said on Fox News Sunday that Taliban officials were trying to extort the US while not providing any details or evidence of specific demands.

Rep. Mike McCaul (R-TX), Ranking Member on the Foreign Affairs Committee: “We have six airplanes at Mazar Sharif Airport, six airplanes with American citizens on them as I speak, also with these interpreters, and the Taliban is holding them hostage for demands right now.” pic.twitter.com/L9bB9PoVsE

In an emailed statement to The Independent, a spokesperson for the State Department stressed that the agency does not currently have “a reliable means to confirm the basic details of charter flights, including who may be organizing them, the number of U.S. citizens and other priority groups on-board, the accuracy of the rest of the manifest, and where they plan to land, among many other issues.”

“We will hold the Taliban to its pledge to let people freely depart Afghanistan,” added the spokesperson.

Other news reports on Sunday threw into question whether international flights would be possible from Afghanistan at all in the near future without international assistance. A report from The Washington Post detailed the multi-day efforts to get Afghanistan’s largest airport, Hamid Karzai International Airport in Kabul, up and running again following the US withdrawal which apparently concluded leaving the airport unable to use radar or other technology necessary for takeoffs and safe airspace control; departing flights on Saturday and Sunday were using their own visual guidance for takeoffs.

“There’s no radar, no navigation systems in place,” an official at the airport told the Post.

The state of Kabul’s airport could indicate that similar or even worse problems exist at Mazar-i-Sharif’s airport, though the airport did see at least one successful landing on Saturday when a domestic flight from Kabul successfully touched down in the northern city.

“The Taliban will not let them leave the airport,” Mr McCaul asserted on Sunday. “We know the reason why is because the Taliban want something in exchange.”

“The U.S. airfield in Qatar that has been standing by, ready to receive, is now beginning to pack up,” Marina LeGree, executive director of an NGO involved with two of the charter flights at the Mazar-i-Sharif airport told CBS News. “We hope visibility will add pressure to force a solution. Six days of talks are not encouraging.”