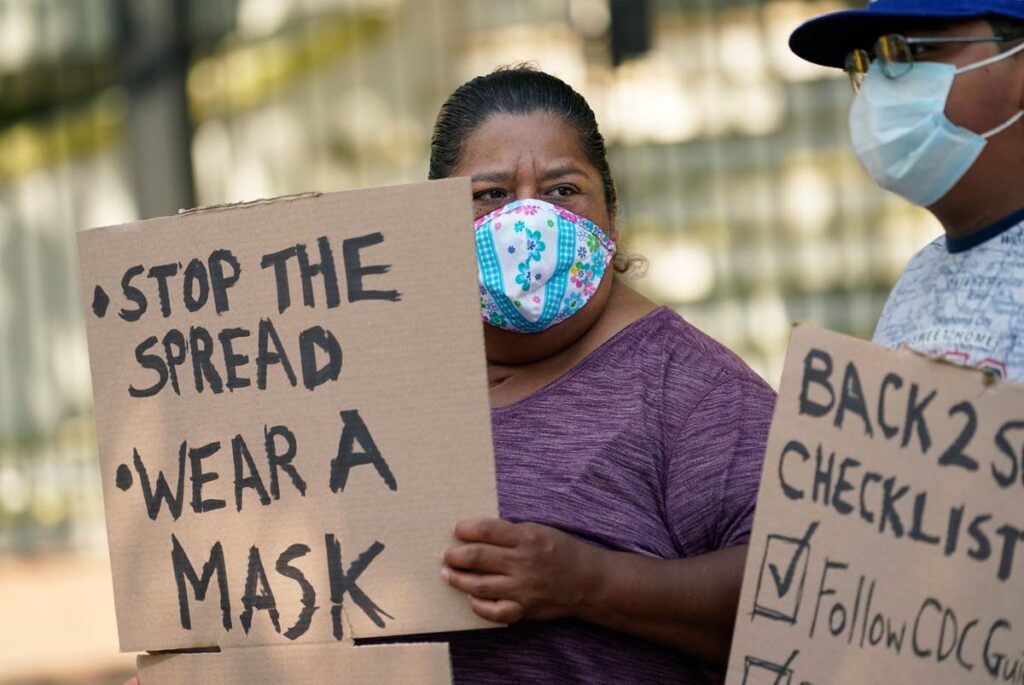 As the nation’s rate of new confirmed infections from Covid-19 surges, followed by climbing hospitalisations and deaths, the picture in Texas has become more acute.

The current seven-day average positive rate in the nation’s second-most populous state has reached 17.8 per cent, nearly 8 points above the threshold that Governor Greg Abbott himself considers “dangerous,” and nearly double the current national average.

On Sunday, at least 12,227 Texans – the overwhelming majority of whom have not been vaccinated against Covid-19 – were hospitalised for the disease. Rising infections, the growing strain on intensive care units and a shortage of available beds have put the state on track to enter one of its most dangerous points in the public health crisis despite widely available and free vaccines.

Meanwhile, the governor – who has fought to preserve his ban on school districts and local governments from implementing mask or vaccine mandates, even as his administration requests mortuary trailers from the federal government to anticipate more dead patients – has tested positive for Covid-19.

He is fully inoculated from the disease – including, reportedly, having received a third booster shot – and is tested daily. He also received Regeneron’s monoclonal antibody treatment, which has been used to prevent hospitalisation in severe cases.

But he has resolutely rejected mask mandates, going so far as it make it illegal for local governments to issue them, and ignored public health guidelines amid the pandemic.

His diagnosis, and the state’s accelerating crisis, follows his special legislative session agendas that called children back to in-person instruction for the fall school year while hamstringing local officials from putting mask orders in place to protect against infections among thousands of children too young to get vaccines.

While he received his vaccine shots on TV and has called them the “surest way to end the pandemic,” he has repeatedly rejected calls to tell people to wear masks.

“Going forward, in Texas, there will not be any government-imposed shutdowns or mask mandates,” he said in remarks from Dallas earlier this month. “Everyone already knows what to do.”

On Sunday, as students prepared to return to school, a state supreme court ruling temporarily backed the governor’s order. Texas Attorney General Ken Paxton said the decision should serve as a reminder to residents that “mask mandates are illegal.”

The Centers for Disease Control and Prevention recommends everyone wear masks in indoor settings in parts of the US with high rates of transmission, which is now most of the US, and everyone in schools should wear them regardless of vaccination status.

On Monday night, the governor spoke at a maskless, packed-house Republican fundraiser. Videos and photographs shared by his campaign show him surrounded by unmasked supporters and posing for photographs.

“Governor Abbott has put his own Republican primary politics before the public health since day one,” said Julian Castro, former San Antonio mayor and Obama administration official. “I hope he recovers quickly. I also hope he will act more responsibly on behalf of Texas children and families.”

While it’s lower than its winter peak in January, the nation’s positivity rate has exploded by more than 882 per cent from its lowest point during the pandemic that was just two months ago, with a seven-day average that is more than 18 per cent higher than the previous week.

Covid-19-related hospital admissions in Florida, Louisiana and Oregon are at their highest levels since the start of the pandemic.

Texas has a higher case rate than all but seven other states, all in direct proportion to their struggling rates of vaccinations. The state has seen a 57 per cent increase in infections within the last two weeks, according to The New York Times.

Intensive care units in five states – including Alabama, Florida, Georgia, Mississippi and Texas – are more than 90 per cent full, according to federal health data.

As schools and local governments fight back against the governor’s order while bracing for more infections throughout the school year in some of the largest school districts in the country, San Antonio and Bexar County were granted a temporary injunction to allow a mask mandate to remain in place as courts consider a permanent injunction.

On Sunday, San Antonio Mayor Ron Nirenberg said that “regardless of the eventual outcome in court, every day our unvaccinated children are protected at school by masks, which have been proven to be effective, is a win for our community.”

“As we have said throughout this matter, the mask mandate is a time-sensitive measure that helps local leaders and health experts to contain the spread of Covid-19,” City Attorney Andy Segovia said. “This is especially important given the thousands of children who returned to school this week, many of whom are not yet eligible to be vaccinated.”

An appeals court decision also has allowed Dallas to maintain an order requiring masks in public schools, universities and businesses.

“This should never be a political fight,” said Dallas County judge Clay Jenkins. “We’re at war on behalf of moms and dads and kids against a deadly virus. I sure wish the [governor] would join our side in the battle.”