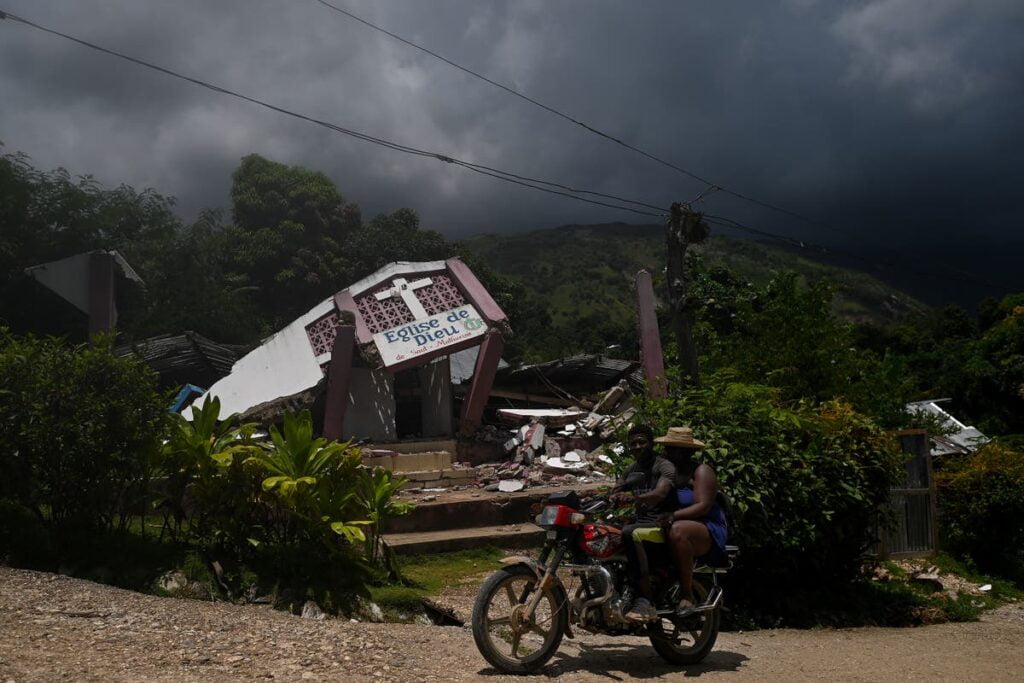 Classrooms for 400 students lie crushed under a collapsed roof, a smattering of desks broken like matchsticks. Chunks of the Pepto-pink health centre slammed into the administration office. In the debris field that was the Evangelical Baptist School of Picot, a white crib in a day care is the single item still standing.

Tuition was $200 (£146) a year, a tidy sum for the land-tillers, tradesmen and teachers that populate nearby farming communities. In a country where any edge helps, parents made the sacrifice to give their children a fighting chance. Like most schools in Haiti, where public services were wanting even before last week’s massive earthquake, Evangelical Baptist was private.

It was also uninsured.

One of the hundreds of schools destroyed or badly damaged when the earth shook, it is now emblematic of a disaster that took 2,189 lives and counting – and so much more.

It robbed communities across Haiti’s largely rural south of their futures: their schools and hospitals – which, in Haiti, can take serious politicking and decades to secure. Their churches and temples – Catholic, Protestant, Vodou – which so often provided for people when the government did not. The quake also damaged power plants, bridges and roads, compromising electric grids and transit. The water supplies for countless communities are contaminated, in some places, locals say, because of corpses upstream.

“It will cost millions to rebuild our school, and we do not have it,” said the Rev Calixte Dorval, Evangelical Baptist’s 65-year-old rector, as he walked past a stray piece of roof. “The government doesn’t have it. Our only hope is foreign assistance, and we don’t know what will come. Without it, none of our schools will ever be rebuilt. And Haiti will always be a country stuck behind the bus, late and left behind.”

Even as Haitians bury their dead, rescue operations continue and bands of desperate victims raid aid trucks. A country of endless crises led by an interim government stepping in for an assassinated president once again faces the arduous task of rebuilding.

In the Western hemisphere’s poorest nation – one worn down by repeated natural and manmade disasters – the list of broken infrastructure and housing is an omen of new hardship ahead. In the rural southern peninsula, which is already cut off from the capital by violent gangs that control the roads, tens of thousands of homes and buildings are in ruins.

Among them are 24 healthcare facilities, including four that were obliterated and some that serve as the only hospital within a several-hour drive. At least 287 private and public schools were damaged or destroyed. A key bridge in Jérémie is buckling, threatening to isolate thousands. Sections of road, including a recently paved highway that took more than a decade to build, have been split, chunks broken off.

Just as it did in 2010 after an even more deadly earthquake – and in 2016, when Hurricane Matthew pummeled the same southern communities stricken by the quake now – Haiti is looking to the international community for help.

But that hasn’t worked out well in the past.

Last week’s quake reopened old wounds from the 2010 temblor that struck closer to the densely populated capital and killed more than 220,000 people. More than $13bn in aid was allocated by international agencies to respond to the disaster. But mismanagement, a disconnect with local reality and lack of organisation led to mistakes that the Haitian government, international agencies and NGOs say they can’t afford to commit again.

Edline Joesil lost her husband in the disaster

Allegations emerged that some aid groups raised money on the back of Haitian suffering while using relatively little of the funds on the ground. In 2016, the United Nations acknowledged its peacekeepers played a role in a post-quake cholera epidemic. In 2018, the charity Oxfam admitted that staff members had engaged in “sexual misconduct” with vulnerable earthquake victims.

“There was just so little respect and understanding of the Haitian people,” he said.

To avoid the mistakes of the past, the Haitian government is now requesting that aid flow through it, and aid groups say they are improving coordination to avoid overlap and address critical needs. But Haiti was already in the midst of a humanitarian crisis before the quake, and aid groups remain concerned about meeting needs in a country that now has so many.

“While humanitarians are focusing on the immediate life-saving response, longer-term solutions to development deficits need to be addressed to support Haiti to build back better,” said Christian Cricboom, Haiti director for the UN Office for the Coordination of Humanitarian Affairs.

Aid agencies have agreed not to give out too many tents

The Haitian government criticised international aid groups for widespread distribution of tents in 2010, saying it led to sprawling tent cities that remained for years. Controversially, officials are asking aid organisations to refrain from large-scale tent handouts now – a request aid agencies say they back.

But with hundreds of thousands of Haitians suddenly homeless across the south, there is less understanding in the streets. Distrust of local and national officials, who victims insist are corrupt and will distribute the aid for personal or political gain, is growing.

“How are we supposed to stay dry after our houses collapsed?” said Sylvia Herculus, 38, pointing to the bedsheets she strung up in a square in the hard-hit city of L’Asile, 10 miles from the epicentre. Hundreds of residents who lost their homes are now squatting in the square, which has the feel of a refugee camp.

Not far from Herculus, a disabled man sat in the open in his underwear and a tank top, a sanitation bucket next to him. He struggled with palsied hands to shield his exposed body with a thin towel.

A wrecked school in Camp-Perrin

“We need tents!” Herculus said. “They say they will rebuild quickly. But we know they won’t.”

One of the biggest rebuilding challenges is the loss of countless churches and temples that offered social safety nets for rural people largely abandoned by the state. In Camp-Perrin, the Kay Manbo Yolande Vodou Temple distributed rice to the needy in the mornings. Now, the building is a rubble heap on the side of National Road 7, a scenic highway, now damaged, that runs through soaring mountains covered in lush jungle canopy.

Its priestess, Jeanne Yolande Vital, a pillar of the community, was crushed inside, along with the kitchen and restaurant that fed the community.

“My mother was the shoulders of this community; it depended on her,” said Derelie Davilmar, 38, Vital’s daughter. “She gave food, medicines. What the people needed. There is no way to replace her. The community will suffer.”

Senicile Massius, 39, mayor of a nearby devastated town, Marceline, fretted for its future after “hardly a single school” was left standing.

“We still have 10 schools that were damaged by Hurricane Matthew that never reopened,” she said. “We cannot let that happen now. Too many schools have been destroyed. But how will we rebuild?”

Even as Haitians confront tremendous grief, many are looking at the future with fear.

Edline Joesil, a teacher, lost her husband, also a teacher, in the earthquake. He died at a funeral, when the church caved in.

Now a single mother of three and her house destroyed, Joesil said she was most afraid for her children’s education.

Two weeks before school was set to start, their classrooms and school supplies were under rubble.

“It was my husband’s dream to educate them,” she said. “But now I have lost everything and they have no schools left to attend. I am lost.”

Bruno Maes, Unicef’s representative in Haiti, visited schools hit by the earthquake with Haiti’s minister of education this week.

Roughly 100,000 students and teachers will have their academic years disrupted, he said. Classes are unlikely to return before October, a grave concern in a country where half of children attending school are at risk of dropping out.

Workers have been digging graves

“The frustration of the population is increasing,” he said. “They want to get assistance quicker, but it’s not easy for us to be everywhere with all of the assistance needed.”

L’Asile, a conurbation of 52,000 people living mostly in rural communities, was founded in the 1930s. After decades of trying, it secured its first hospital – a 50-bed facility complete with operating rooms and infectious-disease wards – in 2008.

Now, the administration offices of the facility have fallen on top of operating rooms, paediatrics and the maternity ward. Miraculously, no patients or staff died, although injuries included broken limbs and deep gashes. Expensive medical equipment and the only surgery centre within a two-hour radius now lie under tons of concrete. The interior of the director’s office – a Haitian flag on his desk – is visible through a collapsed wall.

The hospital’s capabilities have been reduced to a small outdoor triage centre, where bandages are changed amid mosquitoes and biting flies.

“Rebuild?” Dr Geraldine Chery, 34, said with a grim laugh outside the collapsed facility. “How long will it take? Seriously? In Haiti? Maybe 100 years.”

Few trust in a rebuilding effort that could restore what little they had. The fear in communities such as L’Asile – where most homes have been damaged or destroyed – is that they will simply fade into time, that their homeless residents will migrate to the capital or join the growing number of Haitians trying to make it to the United States.

“I’m the mayor, and I’m ready to go,” said Martinor Gerardin. “The people think I’m holding back help from them, and I’m afraid. Please, take me in your helicopter to Miami. I am ready to go now.”