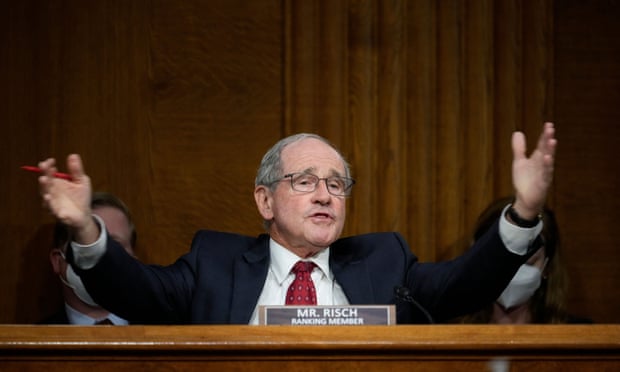 The secretary of state, Antony Blinken, fought back laughter on Capitol Hill on Tuesday as the Republican senator James Risch relentlessly questioned him about a rumor that someone on the White House staff “pushes the button and cuts [Joe Biden] off mid-sentence” with a wireless device.

“Somebody in the White House has authority to press the button and cut off the president’s speaking ability and sound. Who is that person?” asked Risch, who was also former lieutenant governor of Idaho.

In video of the testimony, Blinken tries to restrain his amusement as Risch repeatedly asks him different iterations of the same question during a hearing that was meant to focus on the US withdrawal from Afghanistan.

“Anyone who knows the president, including members of the committee knows that he speaks very clearly and very deliberately for himself,” Blinken said. “No one else does.”

“Are you saying that there’s no one in the White House that can cut him off?” Risch asked again. “It’s been widely reported that somebody has the ability to push the button and cut off his sound and stop him from speaking,” Risch persisted. “Who is that person?”

“There is no such person,” Blinken said in response with a chuckle. “Again, the president speaks for himself, makes all of the strategic decisions informed by the best advice that he can get from the people around.”

If that weren’t enough, Risch asked the question again, and Blinken repeated his answer.

The notion that Biden is being controlled by someone behind the scene originated from a tweet by RNC Research, an official affiliate of the Republican National Committee that claims it is “exposing the lies, hypocrisy and failed far-left policies of Joe Biden”.

The tweet included a video clip from a meeting where Biden was briefed by federal and state fire agency officials about the wildfires in the west.
Biden responds to comments from George Geissler, a state forester representing the National Association of State Foresters at the briefing.

“Can I ask you a question?” Biden asks Geissler. “One of the things that I’ve been working on with some others is …” and the feed cuts off.

The longer version of the conversation, which is available on the White House’s official YouTube channel, ends after Biden asks “Can I ask you a question?”

While the RNC tweet was based on Monday’s wildfire event, rightwingers have been harping on for months about the possibility that the White House is “blocking Biden from being heard by the general public”, as they cherrypick instances where a live feed was interrupted.

CNN’s Chris Cuomo debunked the conspiracy and demonstrated that it was “the mic falling off”, which he said was planned.

“The press pool following Biden comes in briefly for pictures, then they’re ushered out. This happens all the time,” he said. “Standard operating procedure. But the right has been building this lie for months. They’d rather it be something more.”

Once the press’ window to photograph and record the meeting was over, they would be ushered out, and that is when the feed cut off, according to another media report.

… we have a small favour to ask. Millions are turning to the Guardian for open, independent, quality news every day, and readers in 180 countries around the world now support us financially.

We believe everyone deserves access to information that’s grounded in science and truth, and analysis rooted in authority and integrity. That’s why we made a different choice: to keep our reporting open for all readers, regardless of where they live or what they can afford to pay. This means more people can be better informed, united, and inspired to take meaningful action.

In these perilous times, a truth-seeking global news organisation like the Guardian is essential. We have no shareholders or billionaire owner, meaning our journalism is free from commercial and political influence – this makes us different. When it’s never been more important, our independence allows us to fearlessly investigate, challenge and expose those in power. Support the Guardian from as little as $1 – it only takes a minute. If you can, please consider supporting us with a regular amount each month. Thank you.