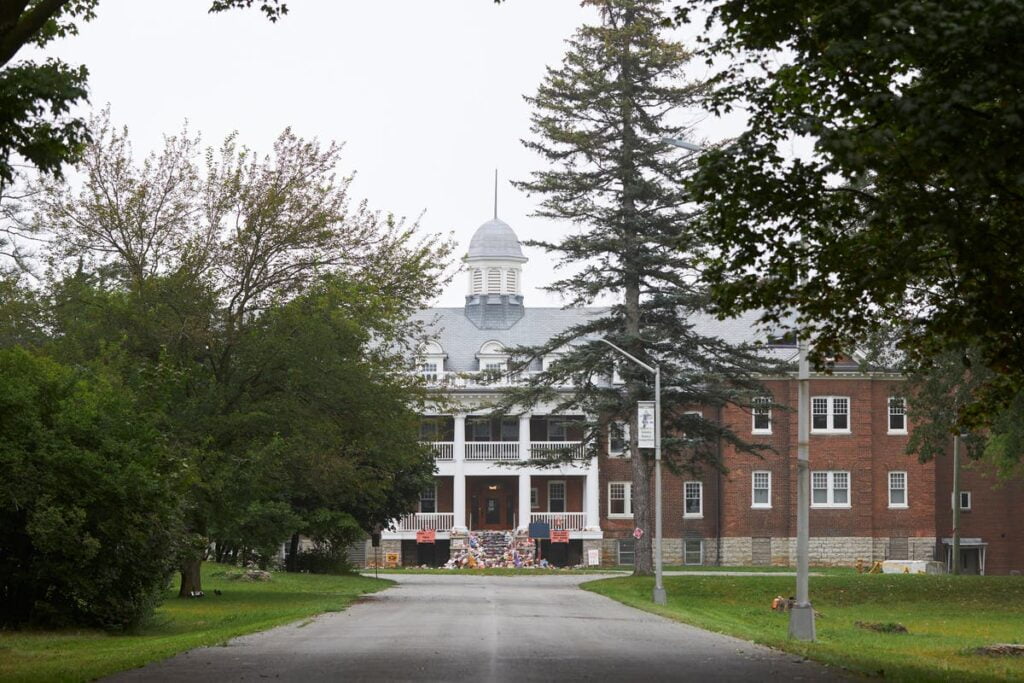 On a clear September evening at 5:14pm in the west end of Toronto, my friend Joey Commanda was struck and killed by a commuter train. He was 13.

The train was moving east at 65mph toward the central rail yards and Union Station, carrying passengers homeward after a Labour Day weekend in 1968. Joey, less than five feet tall and weighing about 90 pounds, was also on his way home, a trek he began when he fled the notorious Mohawk Institute, one of Canada’s 130 residential schools for Indigenous children.

Joey had made it 60 miles from the institute, located in Brantford, Ontario, by following train tracks adjacent to the school grounds. He started out with his brother Rocky, a year older, who had been caught by the Ontario Provincial Police in Hamilton, about halfway to Toronto. But Joey escaped the police and continued on his journey, alone, with another 200 miles ahead. Once he reached Canada’s largest city, he would have had to abandon the tracks and walk or hitchhike a series of back roads to reach his home, the Golden Lake Reserve. Now called the Pikwakanagan First Nation, it is part of the Algonquin people, whose homelands stretched from Ontario to central Quebec.

Joey, like Rocky and most of the other institute children, had been taken from his home, removed from his native community as part of a generations-long project to eradicate his heritage, teach him a trade and coerce him to become part of the Canadian mainstream. It was designed to “kill the Indian” out of children – and it did that literally when the brutal conditions Joey was subjected to became too much for an ill-fed, skinny native boy to endure.

Dozens of such schools, usually church-run and government-sanctioned, were scattered across Canada from the late 1800s until the 1990s. We now know that abuse and neglect were rife in these places. The discovery this summer of the remains of hundreds of native children on the grounds of former schools has compelled Canada to reexamine this controversial part of its treatment of Indigenous children. A similar reckoning is happening in the United States, which also had federal boarding schools for native children.

The Mohawk Institute, where I lived with about 200 other boys, was nicknamed the “mush hole” because of the watery porridge we were given each day for breakfast

I was a mate, a friend, a pal of Joey’s. Six months before he was brought to the institute, I was taken from my home in the Akwesasne Mohawk Territory, located astride the international border along the St. Lawrence River where Quebec, Ontario and New York are joined. I was born and raised on the Canadian side of Akwesasne and attended the local school, overseen by the Jesuit order of the Catholic Church. I belonged to one of the last Jesuit missions in North America, a good student in those pre-Vatican II times, living across the street from the church and serving as an altar boy.

My good behaviour did not stop the parish priest from collaborating with the reserve’s federal Indigenous agent and the local detachment of the Royal Canadian Mounted Police to take me and my brother away from our father after our mother died. I was 11 and he was 10. We had no idea of our destination or the months of terror and violence we would witness 350 miles from home.

Rocky Commanda and Loretta Nadeau, brother and sister of Joey Commanda, on the grounds of the former Mohawk Institute. Rocky joined Joey in trying to escape from the school, but he was caught by the police

The Mohawk Institute, where I lived with about 200 other boys, was nicknamed the “mush hole” because of the watery porridge we were given each day for breakfast, along with a slice of burned white toast and a glass of powdered milk. Hunger – the compulsion to eat anything outside of the meagre dining hall diet – was overwhelming, the pains in our stomachs made worse by having to march, military-platoon style, past the abundance of food on the tables of the supervisors. We were always on the hunt for something extra to eat, even if it meant plucking off the wings of large insects before eating them. Denial of food was an immediate response to any violation of the many rules that controlled our actions.

Joey and Rocky’s family was not given a choice about sending them away. Once the influential parish priest identified the children he deemed to be better off away from their families, the police arrived to ensure that the parents did not intervene. If they did, the family was subject to criminal charges and could be sentenced to jail.

I recall in September 1967 that the Algonquin brothers found themselves in a large red-brick building, four stories tall. Like others brought to the institute, including myself, the Commanda boys were stripped naked upon their arrival, sprayed with bug-killing powder, then moved into a common shower, where they were given numbers to wear on their prison-style uniforms.

Violence from the supervisors was common. Corporal punishment was imposed with a three-foot, two-inch leather strap, with enough force to make the children scream in pain. I know, having received a beating, the blows continuing until I forced tears.

Our Akwesasne group was referred to as the “St. Regis Boys” for the namesake of our Jesuit mission. We were first-class troublemakers. When we were able to sneak off the grounds, our impulse was to steal whatever we could, particularly food. We were banned from every store in Brantford for our thieving.

We fought any local boy who dared cross our path; when it wasn’t white kids, we fought with one another. We also ran whenever we had the chance, our way home marked by the nearby Canadian National Railway tracks. We were inevitably caught – the provincial police knew our route and set their traps accordingly.

Our bad behaviour was serious enough that the institute expelled us as a group back to the reservation. So when the Commanda boys returned from summer break in September 1968, we were not there. We could not protect them. They were vulnerable and decided to run.

The words “Help me please” are etched into a brick at the former Mohawk Institute.

Joey did not give up when Rocky was arrested. He walked for another 30 miles, hopping from one track to another. The conductor of the train that struck him testified that he saw Joey cross one set of tracks to avoid a westbound train, only to slip as he tried to make it across track No 3. He may have stumbled over one of the rails or got caught in the loose stones, but the blasting of the train’s horn and the screeching brakes weren’t enough to prevent him from being hit, his death instantaneous.

Joey’s relatives were angry and forced an investigation of the Mohawk Institute, which revealed the beatings and other abuses that went on unchecked inside the school. The result was that the mush hole was ordered to close in 1970. We had heard there were many more kids who had died of starvation or accidents, or from abuse, and then were buried somewhere on the school grounds. Survivors began collaborating with the Indigenous police to search the grounds on Thursday. Ontario and the federal government have recently committed millions of dollars to recovery efforts nationally.

No one was ever prosecuted in Joey’s death. No one has been brought to justice for the generations of criminal acts committed against helpless native children. Not one of the abusers at the Mohawk Institute has been charged, while the Anglican Church of Canada, contracted by the federal government to manage the school, has escaped liability.

A march this weekend for Joey Commanda, retracing his steps from the institute to the exact place of his death in western Toronto, is meant to honour this most sensitive and terrified boy.

Doug George-Kanentiio is a member of Akwesasne Mohawk Nation, a former trustee for the National Museum of the American Indian and a co-founder of the Native American Journalists Association.