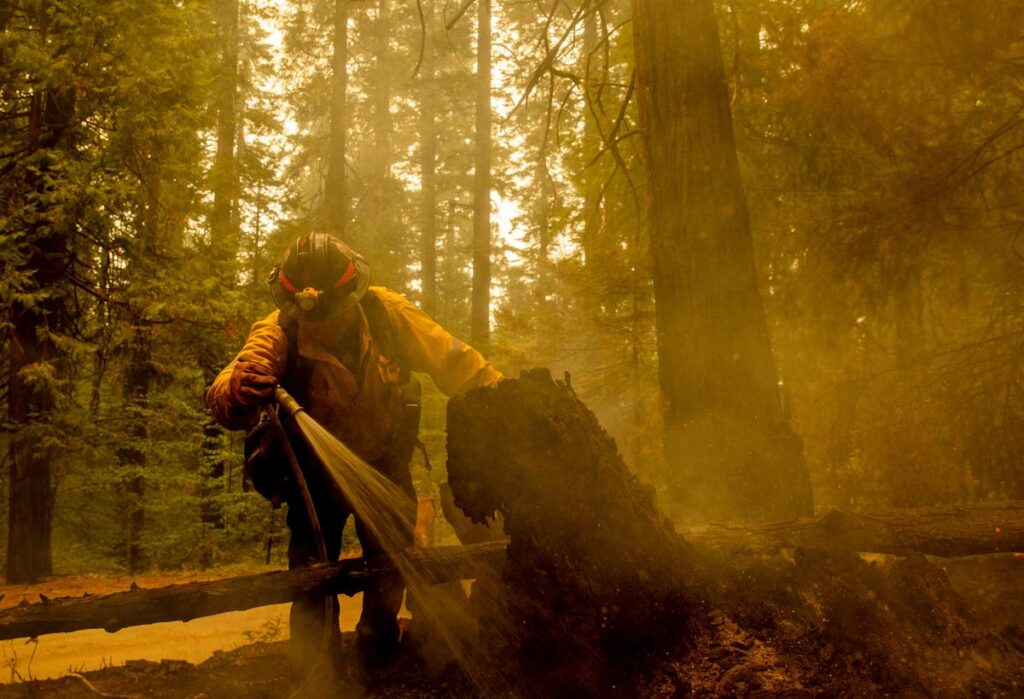 Crews were digging in and burning out fire lines amid another round of high winds Saturday that contributed to the fury to a Northern California wildfire.

“We have a firefight ahead of us and the wind today is going to make it very challenging,” said Keith Wade, a spokesman with the California Department of Forestry and Fire Protection, or Cal Fire.

The Caldor Fire in the northern Sierra Nevada already destroyed dozens of homes, and authorities on Friday closed down a 46-mile (74-kilometer) stretch of Interstate 50, the main route between the state capital of Sacramento and Lake Tahoe on the Nevada state line.

The highway was closed after debris from the blaze fell onto the roadway and because of red flag warnings for 20- to 30-mph (32- to 48-kph) winds that by Saturday evening “combined with continued extremely dry fuels will result in critical fire weather conditions in the vicinity of the Caldor Fire,” the National Weather Service said.

The road is a key checkpoint as crews struggle against the fire, which erupted earlier this week and grew to 10 times its size in a few days, fueled by winds.

“We’re going to invest everything we can into holding the fire south” of the road, said Eric Schwab, an operations section chief with Cal Fire.

Firefighters made progress on the fire’s western side and burned vegetation to starve it of fuel and prevent the flames from heading into the evacuated community of Pollock Pines. On the northeast side, crews were protecting cabins in the dense forest area, fire officials said.

The Caldor Fire had now devoured about 130 square miles (310 square kilometers) as of Saturday and more than 1,500 firefighters were battling it amid heavy timber and rugged terrain.

The blaze was one of about a dozen large California wildfires that have scorched Northern California, incinerating at least 700 homes alone in and around the Sierra Nevada communities of Greenville and Grizzly Flats.

The fires, mainly in the northern part of the state, have burned nearly 1.5 million acres, or roughly 2,300 square miles (6,000 square kilometers) and have sent smoke as far as the East Coast. They were burning in grass, brush and forest that is exceptionally dry from two years of drought likely exacerbated by climate change.

Thousands of homes remained under threat in communities tucked away in scenic forests and tens of thousands of people remain under evacuation orders.

Nine national forests in the region have been closed because of the fire threat.

To the northwest of the Caldor Fire, the massive Dixie Fire kept expanding and new evacuations were ordered, including the tiny hamlet of Taylorsville. In five weeks, the fire about 175 miles (282 kilometers) northeast of San Francisco has become the second-largest in state history and blackened an area twice the size of Los Angeles.

Weather forecasts call for a storm system that will bring winds but little rain through Northern California into early next week. With it will come increased risks of fires. Dozens have erupted in recent days but were quickly stamped out.

An exception was the Cache Fire, a small but fast-moving grass blaze that ravaged at least 56 homes and virtually annihilated a mobile home park.

Some of those forced to flee the flames had to leave their pets behind.

Emily Crum, an animal control officer with North Bay Animal Services, got a surprise as she searched for abandoned pets in the Clearlake area.

She spotted a black dog in a charred lot.

“I saw her laying there. I thought she was dead,” Crum said. “Then she started wagging her tail.”

Despite being chained to a boat trailer, the mutt named Sammy had not been injured, Crum said.

California is one of a dozen mostly Western states where 99 large, active fires were burning as of Friday, according to the National Interagency Fire Center.

Fires have intensified across the entire West, creating a nearly year-round season that has taxed firefighters. Fire patterns used to migrate in seasons from the Southwest to the Rockies, to the Pacific Northwest and then California, allowing fire crews to move from one place to the next, said Anthony Scardina, deputy regional forester for the U.S. Forest Service.

“But the problem is all of those seasons are starting to overlap,” Scardina said.