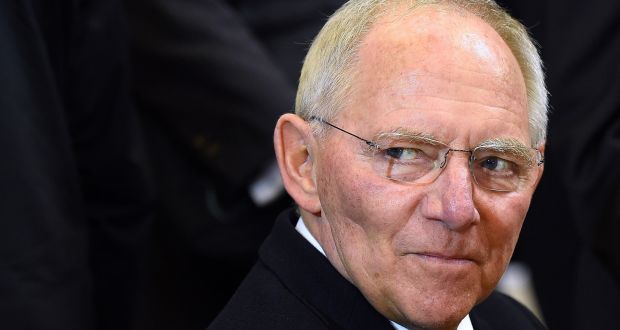 The Black Forest doesn’t get much blacker than Schäuble country. A half-hour drive east from Strasbourg, Offenburg and its environs have, since 1972, been the political stomping ground of Wolfgang Schäuble of Germany’s centre-right Christian Democratic Union (CDU).

For nearly half a century Dr Schäuble, a short-lived CDU leader as well as interior and finance minister and now Bundestag president, has served the region as MP for the “black” party on Germany’s political spectrum. In 1990 he survived an assassination attempt and, a decade later, his voters stood by him despite involvement in an illegal CDU slush fund.

On Saturday, he celebrated his 79th birthday and is on course next Sunday to secure a record 14th Bundestag term. But in his Black Forest CDU heartland, the mood is bleak. After 16 years in power in Berlin, the CDU is trailing five points in opinion polls.

Without chancellor Angela Merkel, her successor Armin Laschet is struggling in a campaign even senior officials concede has been a fiasco. A final televised election debate on Sunday night was a final chance for Mr Laschet to turn things around – but Dr Schäuble has decided not to wait. Ever the political survivor, he has begun to tiptoe away.

“I was no euphoric Laschet supporter,” said Dr Schäuble, according to one attendee of a private party in the Hotel Dollenberg in St Peterstal, near his home. Attendees say Dr Schäuble worked hard to play down his part in running Armin Laschet as joint election lead candidate with the Christian Social Union (CSU), the CDU’s Bavarian sister party. In the spring, CSU leader Markus Söder, a ruthless political operator, laid siege to the larger CDU.

‘Bend to Söder’
As he gained ground and support across the country, an alarmed Dr Schäuble warned party allies: “If we bend to Söder, the CDU is dead.” The key turning point, according to CDU sources, was a secret meeting between Söder and Laschet on April 18th.

Hosting the three-hour meeting was Dr Schäuble, in his roomy, first-floor Bundestag office suite. According to informed sources, Dr Schäuble made two key interventions. First, he warned Mr Laschet that, unless he insisted on being the CDU/CSU candidate, his days as party leader were numbered. Second, the CDU’s grey eminence told Mr Söder to go back to Munich. The Söder siege ended the next day but many in the CDU now wonder if they were foolish to follow Dr Schäuble and reject the more radical candidate. Even Dr Schäuble, say attendees of his Black Forest party, sounds like someone with buyer’s remorse.

“With his calm, reflective style he would be the right chancellor,” said Dr Schäuble of Mr Laschet to guests, according to one attendee. “Whether he is the right election campaigner who can enthuse the crowds . . .” Last January things looked promising for Mr Laschet on his election as CDU leader: the party was on 35 per cent in polls, two points above its 2017 result, while the SPD were struggling.

But a strong SPD campaign, a weak CDU strategy and a series of Laschet gaffes have squeezed the CDU as low as 20 per cent. “Laschet behaved as if [power] was his inheritance, which he only had to claim it rather than win voter support,” suggests Der Spiegel magazine. Essentially, the CDU has been tripped up by its own sense of entitlement to power, it suggested, an “arrogance toward democracy”.

On Sunday, Dr Schäuble began stage two of his blame shift plan, by pinning the looming disaster on Dr Merkel. The two politicians have had a chilly relationship since 1999 when, amid a CDU donations scandal, she sidelined him as party chairman to snatch the leadership. On Sunday it was Dr Schäuble’s time to turn the knife, saying Dr Merkel made a fatal mistake by giving up the CDU leadership in 2018 while staying on as chancellor. That, he said, gave Mr Laschet no room to manoeuvre on the campaign trail. “He can’t say ‘we’ll do everything different’ and he can’t say ‘we’ll just continue as before’,” said Dr Schäuble to Berlin’s Tagesspiegel newspaper.

“Angela Merkel took a risk when she stood down as party leader, saying it is possible to separate the two offices. Is it? I’m firmly convinced both belong in one pair of hands.” Senior Merkel officials bridled at those remarks, noting that the CDU – including Dr Schäuble – backed the Merkel decision, and has had nearly three years to prepare itself for this election. “Schäuble is really the king of the piss-takers,” said one Merkel loyalist.

“He’s the one who heaved Laschet onto his horse.” After half a century, a CDU defeat next Sunday would see Dr Schäuble depart as Bundestag president. A disastrous result for his party will also end the 79 year old’s days as the CDU’s leading backroom operator. To put it as he might:“Isch over.”