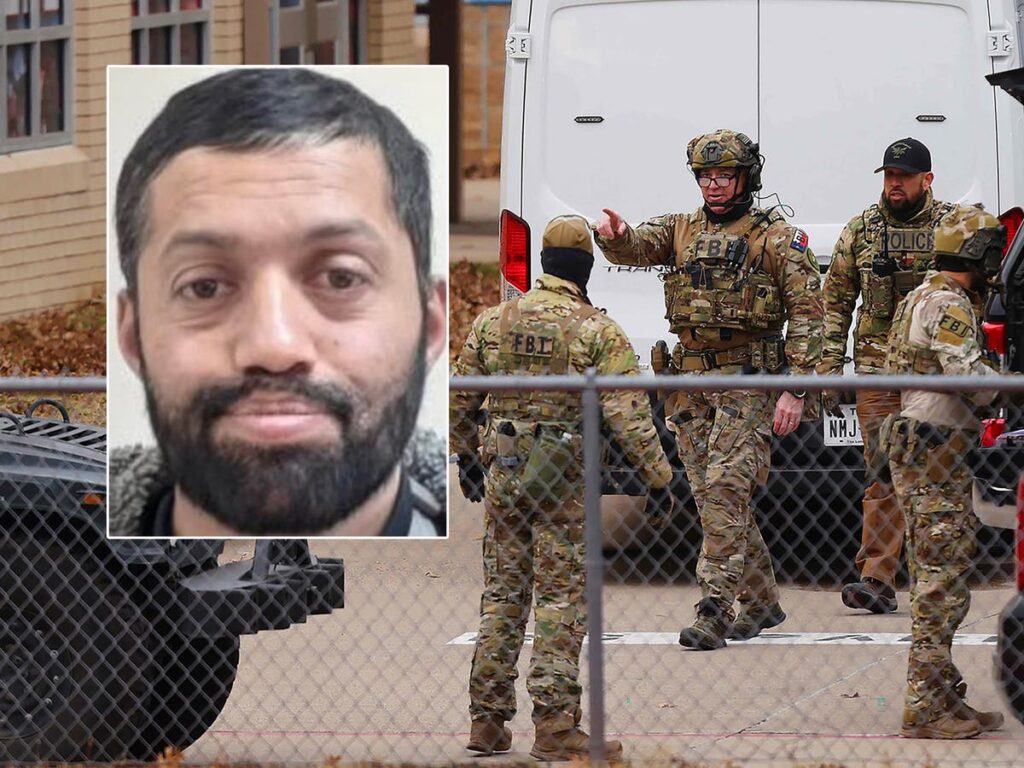 A multinational investigation is underway after a British man allegedly held four people hostage for 10 hours at a synagogue in Texas on Saturday.

The hostage-taker, identified by authorities as 44-year-old Malik Faisal Akram from Lancashire in the UK, held the worshippers at Congregation Beth Israel in Colleyville, outside Fort Worth. A Facebook livestream of the Shabbat service was left running at first, and remote viewers heard him speaking to police.

After hours of tense negotiations with a hostage rescue teams, Akram was shot and killed in a reported firefight with authorities.

Many details about the attack have yet to become clear as an investigation by multiple law enforcement agencies in the US and UK remains ongoing.

The FBI has said it is working to determine Akram’s motive, adding that the bureau believed the man was “singularly focused on one issue” and that it was “not specifically related to the Jewish community”.

Intrigue around the case grew on Sunday as two teenagers from Manchester were apprehended for questioning in connection with the attack.

Malik Faisal Akram’s attack unfolded over the course of roughly 11 hours on Saturday. A service was underway at Congregation Beth Israel when a man – believed to be Akram – was heard shouting on a livestream of the proceedings.

The livestream was cut off at about 10.40pm as police arrived at the synagogue and four people were taken hostage.

After hours of tense negotiations, the first hostage was released at around 5pm. Four and a half hours later, the other three hostages were rescued as police stormed the building and shot dead Akram at about 9.30pm.

The crime scene was still active on Sunday as authorities announced the captor’s identity, as well as the arrests of two teens in Manchester.

The Independent’s Io Dodds explains everything we know about the attack:

It was later taken offline, but in screenshots made by The Independent he describes spending the night in the incident room at Greenbank police station helping the FBI and hostage negotiators.

“Although my brother was suffering from mental health issues, we were confident that he would not harm the hostages,” said the post, which referred to Akram by his middle name Faisal.

“At around 3am the first person was released, then an hour later he released the other three people through the fire door unharmed.”

That account is backed up by news footage from WFAA showing two people dashing out of the synagogue’s fire escape, followed by a man holding a firearm and wearing a face mask. He is seen on video peeking out and then quickly vanishes back inside. Afterwards, armed police take up positions around the walls.

The Facebook post continued: “A few minutes later a firefight has taken place and he was shot and killed. There was nothing we could have said to him or done that would have convinced him to surrender… obviously our priority will be to get him back to the UK for his funeral prayers, although we have been warned it could take weeks.”

The post also mentioned the death of a younger sibling “barely three months ago”. It said FBI agents were due to fly to the UK on Sunday, possibly to interview Akram’s family. It began and concluded by saying the whole Akram family condemns the hostage taker’s actions.

He had been banned from Blackburn Magistrates’ Court in 2001 after threatening and abusing staff on several occasions.

A letter from the court, published by the Lancashire Telegraph, recounted an incident that took place day after the Twin Towers attack on 12 September 2001.

“In a clear reference to the the terrorist attack on New York the previous day you said on more than one occasion to one of my court ushers ‘you should have been on the ******* plane’,” the letter said.

“This caused a great deal of distress to an individual who was simply doing his job and should not be subjected to your foul abuse.

“With immediate effect it has been decided that in order to protect and ensure the health and safety of staff you should be excluded from and prohibited from entering the court building at all times other than when due to appear in court to answer a summons or surrender to bail or to make a payment in respect of any outstanding financial penalty owed by you.”

At the time, Akram told local media he was innocent and was falsely accused of the remarks because “people at the court have just got it in for me”.

A rabbi who was held hostage during Saturday’s attack recounted the horrifying ordeal in an interview with CBS News on Monday morning.

Rabbi Charlie Cytron-Walker of the Congregation Beth Israel in Colleyville described how he and two other hostages were finally able to escape when he threw a chair at suspect Malik Faisal Akram.

“We were threatened the entire time but fortunately none of us were physically injured,” he said.

“When I saw an opportunity, when [Akram] wasn’t in a good position, I made sure the gentlemen were still with me, they were ready to go.”

Watch the interview below:

Two teenagers were arrested in Manchester a day after Malik Faisal Akram was shot and killed in a hostage crisis across the Atlantic in Texas.

They said the teenagers, whose ages and genders they did not immediately confirm, remain in custody for questioning. It remains unclear how they may have been linked to the hostage situation.

Before he was killed in Saturday’s standoff, Malik Faisal Akram was reportedly heard demanding the release of Aafia Siddiqui – a Pakistani neuroscientist serving 86 years prison time in a Texas jail for attempts to kill US soldiers in Afghanistan.

Officials said Akram asked to speak to Siddiqui, who is lodged in a prison in Forth Worth, about 20 miles away from the synagogue.

In an incident that was being live-streamed on Facebook after the live Shabbat service was left running, Akram demanded his “sister” be brought to the synagogue. However, her real brother denied involvement.

“I just want a bullet in me, and I want to go — that’s it,” Akram was heard saying in the livestream, reported CNN.

The Independent’s Shweta Sharma has more:

Who is Malik Faisal Akram?

New details about Malik Faisal Akram have continued to emerge in the days after he allegedly held four people hostage at Congregation Beth Israel in Colleyville, Texas, on Saturday.

Authorities said Akram is a 44-year-old British national from Blackburn in Lancashire who is believed to have arrived in the US via New York’s John F Kennedy International Airport two weeks ago.

The Independent’s Io Dodds explains what we know about Akram and the attack so far:

Welcome to The Independent’s live coverage of the hostage crisis that unfolded at a synagogue in Colleyville, Texas, on Saturday.

The suspect was identified as Malik Faisal Akram, a 44-year-old British national from Blackburn in Lancashire. His motive has yet to become clear as a multinational investigation remains ongoing.

Follow along for the latest updates on the case.