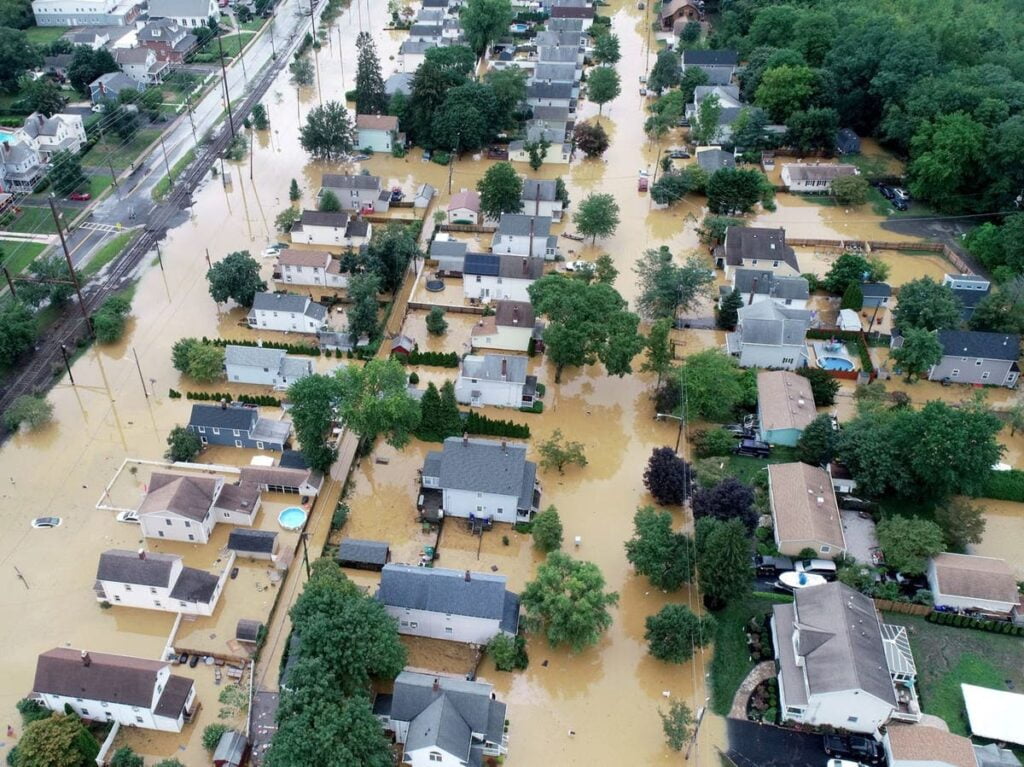 Tropical Storm Henri reached the coast of Rhode Island at 12.15 [17.15 GMT] on Sunday, packing high winds that knocked out power to tens of thousands of homes, and rain that led to flash flooding from New Jersey to Massachusetts.

Henri was downgraded from a category one hurricane to a tropical storm earlier in the day and made landfall near the town of Westerly with sustained winds of about 96kmh (60mph) and gusts of up to 112kmh (70mph), according to the National Hurricane Center.

The storm has since weakened and now has sustained winds of 80kmh (50mph) as it moves inland, heading northwest towards Hartford, Connecticut.

Updating the American people on the federal government response to Henri, President Joe Biden said that while the system had been downgraded from a hurricane, the region impacted has already experienced heavy rainfall in recent weeks and flooding is a threat.

The president has approved disaster declarations for New York, Connecticut, and Rhode Island, and directed Deanne Criswell, administrator of the Federal Emergency Management Agency (Fema), to respond with its full resources.

Resources have been pre-positioned in the affected area by Fema, including food, water, life-saving communications equipment, and generators.

Mr Biden also reminded people not to forget the dangers of the Delta variant of Covid-19 and said that if they have to relocate from their homes they should wear face masks to protect themselves and others. He also took the opportunity to urge those who have not been vaccinated to get the vaccine.

There were few early reports of major damage due to wind or surf, but officials warned of the danger of flash flooding in inland areas over the next few days.

Millions in southern New England and New York braced for the possibility of toppled trees, extended power outages, and flooding from the storm system which threatens to linger over the region well into Monday.

The slow-moving system has specifically raised worries regarding flash flooding from rain over the threat of surge flooding from the sea — hurricane barriers designed to hold back the ocean have been reopened across the region.

New York City has again been placed on a flash flood alert after 24 hours that saw rainfall records broken and streets, highways, and subway stations inundated.

Between 10pm and 11pm on Saturday night, 1.94 inches of rain fell in Central Park, smashing the hourly record. Data has been collected at the weather station in the park since 1869.

“The age of extreme weather is here,” he wrote. It has continued to rain for most of Sunday.

At a Zoom press conference, New York governor Andrew Cuomo, on his last full day in office, warned that the storm would still bring very serious consequences, including flooding, especially if the storm continues to slow down.

“The potential for serious damage from flooding is very large,” he said, urging people to take proper precautions.

In preparation for Henri’s arrival, those living near the coast boarded up windows to protect their homes, and residents made supply runs and prepared generators and batteries amid warnings that power outages caused by the storm could last days. A number of gas stations from Cape Cod to Long Island reportedly sold out of fuel.

Residents on Fire Island, a strip of sandy villages barely above sea level, just off of Long Island’s southern coast, were urged to evacuate on Saturday night. The last boats left the island before 11pm, and officials warned that there may be no way of reaching people left behind.

While some flooding was reported in the community of Ocean Beach, other hamlets including Fire Island Pines and Cherry Grove reported little impact from the storm.

As rain and thunderstorms approached New York City on Saturday night, Central Park’s Homecoming concert – intended to mark the city’s “return” from the Covid pandemic – was called off mid-performance.

Three hours after the concert began, the New York Police Department issued an advisory warning attendees to clear the area, stressing that it was not an emergency, but that the park must be cleared.

Barry Manilow was partway through performing “Can’t Smile Without You” when the advisory was issued and the crowd of more than 60,000 started to disperse.

The concert was set to feature Bruce Springsteen, Paul Simon, Jennifer Hudson, Carlos Santana, LL Cool J, Andrea Bocelli, the Killers, and Manilow, but not all groups were able to perform before the storm hit.

Specifically, The Killers and Bruce Springsteen had yet to perform, and fans could be heard yelling that they had paid to see these acts.

New York City Mayor Bill de Blasio tweeted: “While it’s disappointing that tonight’s concert had to end early, the safety of everyone in attendance has to come first.”

With additional reporting from the Associated Press