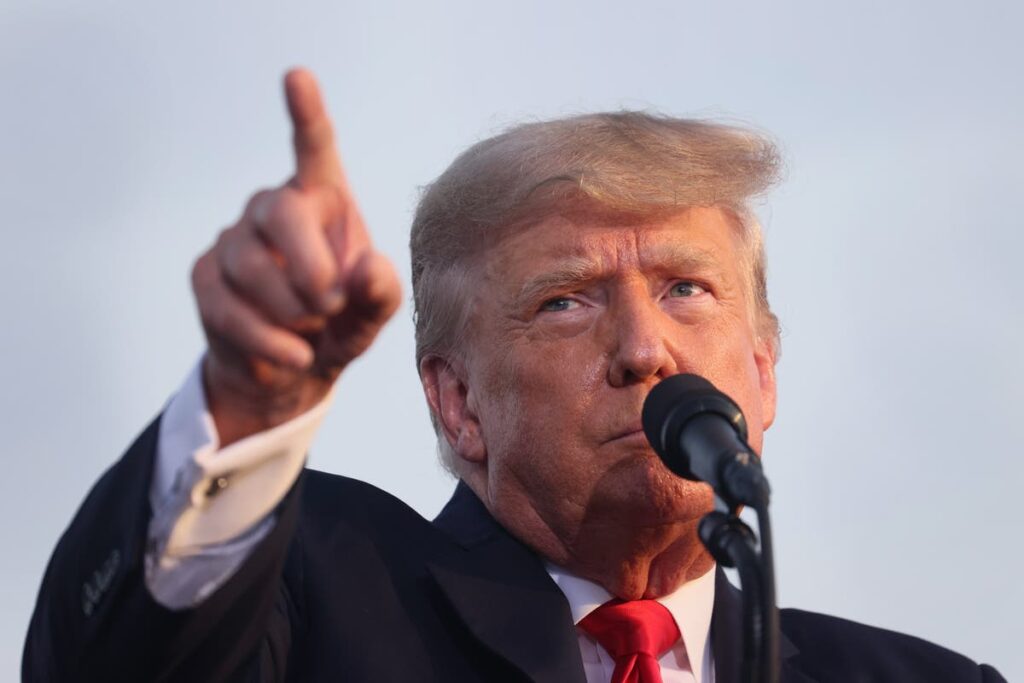 A new interview airing on NPR hears Donald Trump irritably ending his discussion with the broadcaster over questions about the Capitol insurrection and his fixation on non-existent election fraud in 2020.

Speaking to interviewer Steve Inskeep, Mr Trump disowned Republicans who have recognised his fraud claims as false, calling Mitch McConnell a “loser” for agreeing and decrying all those in his party who agree as “RINOs”. According to Mr Inskeep, the interview was meant to go on for 15 minutes but in the end only lasted nine because Mr Trump left the call.

The ex-president is facing further pressure from the select committee investigating the events of 6 January 2021, with the panel issuing subpoenas to a former White House speechwriter and aides to Donald Trump Jr. So far, many White House and Trump associates have refused to comply with the panel’s demands, but many others are thought to have given evidence in private and handed over relevant documents.

Meanwhile, the one-term president’s middle son, Eric Trump, lashed out at New York Attorney General Letitia James, who is leading a long-running probe into whether he or his company violated New York tax laws. Coming off the back of a lawsuit claiming Ms James’s efforts “are in no way connected to legitimate law enforcement goals, but rather, are merely a thinly-veiled effort to publicly malign Trump and his associates”, the president’s son claimed that her probe was unconstitutional.

The younger Trump made the incorrect statements during an appearance on Sean Hannity’s show on Fox News in which he claimed Ms James’s investigation into whether his family business violated New York tax laws is meant to keep his father from running for president in 2024 and amounts to “effectively handing” that election to President Joe Biden.

Former President Donald Trump proved his ability to dominate the attention of the US political sphere this week with a pair of interviews given to National Public Radio (NPR) and One America News, a right-wing broadcaster.

In the two interviews, Mr Trump went after his opponents both directly and indirectly; he called Senate Minority Leader Mitch McConnell a “loser”, a Republican senator who denied his false claims about 2020 “crazy”, and took a shot at politicians (clearly referring to Florida Gov Ron DeSantis, a 2024 rival) who refuse to share their vaccination status as “gutless”.

Andrew Naughtie reports on the NPR interview that was cut short after the host questioned him repeatedly on his false claims about 2020:

House Republican Leader Kevin McCarthy has refused to cooperate with the House select committee investigating the 6 January insurrection, citing the “illegitimate” investigation by the panel.

In a statement released hours after the committee sent a formal request to him for an interview, McCarthy said that the “illegitimate” panel was trying to interview him about his “private conversations not remotely related to the violence that unfolded at the Capitol.”

“The committee’s only objective is to attempt to damage its political opponents,” he said.

“It is with neither regret nor satisfaction that I have concluded to not participate with this select committee’s abuse of power that stains this institution today and will harm it going forward.”

The panel requested “voluntary cooperation” after noting that he had previously acknowledged having at least one telephone conversation with Donald Trump while a mob of his supporters was storming the Capitol in hopes of stopping Congress from certifying President Joe Biden’s 2020 electoral college victory.

Looking at Ray Epps, the subject of the GOP’s newest conspiracy

The Justice Department won’t say why Ray Epps, a man previously identified on a website set up by the FBI to catch Capitol rioters, is no longer facing charges.

The decision has spawned a conspiracy theory on the right, where some supporters of former President Donald Trump have spread the idea that Mr Epps was a federal agent involved in inciting other rioters to violence. There’s no currently-public evidence, however, placing Mr Epps physically inside the Capitol building during the riot.

A congressman from Oklahoma, GOP Rep Kevin Wallace, penned a letter to a DC judge overseeing numerous Capitol riot-related trials and asked her to show “compassion” in the sentencing of a man who spent only a few minutes inside the US Capitol on January 6.

“I’ve known his mother, Kristin Sells, and family for more than twenty years,” wrote Mr Wallace. “He is and has been a contributing citizen in our small community.”

Adam Kinzinger, a congressman on the House select committee investigating January 6, fired back on Tuesday after his fellow Republican, Sen Ted Cruz, questioned an official at a hearing regarding whether a man present at the January 6 attack was a federal agent.

There’s no evidence to suggest that the man in question, who was targeted by conspiracy theorists after being removed from FBI wanted lists, is a federal agent of any kind. Republicans have long sought to prove that left-wing activists or even the government itself was responsible for the massive crowd of Trump supporters that overran the Capitol last year.

“Take your pick. Truth is they were rioters incited by lies. And Ray is no fed. Just another misled man,” wrote the congressman on Twitter. “While it may break hearts, it’s true. So many are misled by so few. Just look up.”

One of former President Donald Trump’s most loyal followers in the House, GOP Rep Matt Gaetz, was in his own hot water on Wednesday as the ex-president battled his niece Mary Trump in court and faces the ongoing efforts of the Jan 6 committee.

Rep Matt Gaetz has been under federal investigation for months after being accused of allegedly engaging in sexual contact with a girl who was 17 at the time, and paying for her travel across state lines. The congressman has strenuously denied the accusations, and has not yet been formerly indicted.

But that could change soon. On Wednesday, his ex-girlfriend testified before a grand jury, and his former confidant is supposedly cooperating after being hit with his own similar charges last year.

Mike Rounds refuses to back down in face of Trump criticism

South Dakota’s Sen Mike Rounds, a Republican, is refusing to cease his criticism of former President Donald Trump and his false claims about the 2020 election.

On Wednesday, he responded after several statements from the former president excoriating him for saying on Sunday during an interview that the election was not stolen; he urged his fellow Republicans to join him, and more persistently call out the former president’s falsehoods.

“If we want to keep the trust and gain the trust of more individuals that are wondering, we have to probably say it a little bit louder and in more places that many of us normally either aren’t invited to talk or have chosen not to get into the fray,” he told The Associated Press.

“You have Letitia James out there, probably the most unethical prosecutor in the history of the United States, who literally said on video ‘I’m going to go into office every single day and I’m going to sue Trump and then I’m going to go home’,” he said.

“She ran on the campaign promise of suing my father because she didn’t believe in his political party, because she didn’t like us, because the people of Washington, DC told her to do that. It violates the Constitution, it’s unethical, it’s wrong,” added Eric Trump.

Andrew Feinberg has the story:

One of former President Donald Trump’s most loyal supporters, MyPillow CEO Mike Lindell, made a bizarre claim on Wednesday in which he said that he supposedly had evidence that would incriminate “300 and some million” Americans relating to the 2020 election and the Trump campaign’s baseless charges of fraud.

There are just over 258 million adults in the US.

The appearance of Dr Anthony Fauci at this week’s committee hearing of the Senate Committee on Health, Education, Labor and Pensions saw an escalation of the ongoing feud between the top infectious disease specialist under two presidents and far-right figures in Congress.

Dr Fauci battled back and accused the senators of spreading misinformation that was leading to threats of violence against him. And he was heard calling Mr Marshall a “moron” after a particularly testy back-and-forth over whether Dr Fauci’s financial disclosure forms were public record.