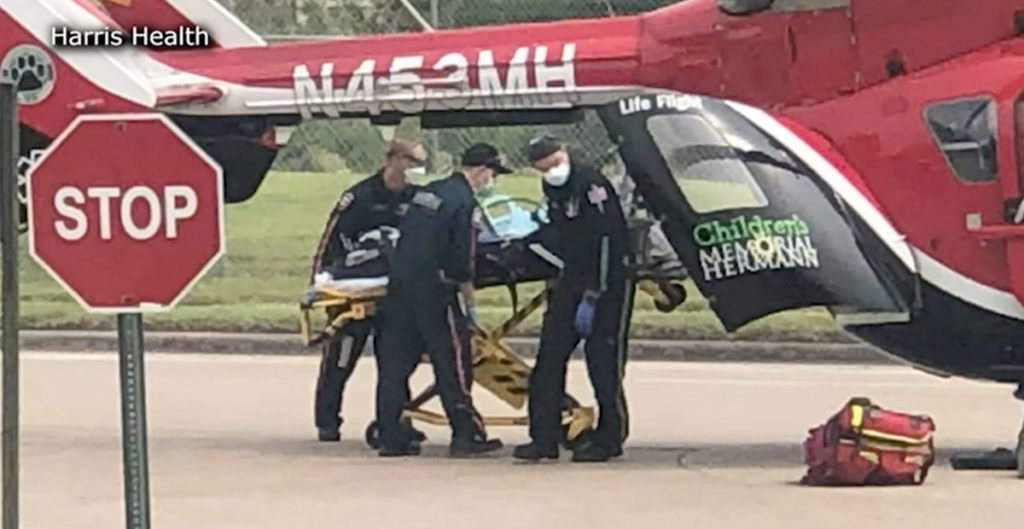 An 11-month-old girl suffering severe symptoms from Covid-19 was flown by helicopter from Houston to a hospital 150 miles away due to a lack of paediatric beds.

The infant was suffering seizures and having trouble breathing after testing positive for Covid-19, a spokeswoman for Lyndon B Johnson Hospital said.

She needed to be intubated, but Lyndon B Johnson Hospital where she had been taken did not offer paediatric services.

And due to a severe shortage of paediatric beds in the Houston area due to the surging case of the Delta variant in Texas, five hospitals in the area were unable to take her, hospital administrator Patricia Darnauer told KKTV.

A video of the girl being airlifted to a hospital 150 miles away in Temple was released by Harris Health, which runs several hospitals in Houston.

“We are back beyond our pre-pandemic volumes at LBJ,” Ms Darnauer said.

Cases of the respiratory illness RSV were also placing pressure on hospitals in Houston.

Cases of Covid-19 have exploded in Texas in recent weeks, with the Lone Star State and Florida accounting for a third of all cases nationwide.

There were 17,534 new cases reported on Thursday, mostly in counties with low vaccination rates, while the rolling seven-day average had reached 11,582.

Harris Health alone admitted 336 Covid-19 patients on Thursday, according to figures released on its site.

Texas Governor Greg Abbott has refused to impose statewide mask mandates and has banned the state government from requiring vaccines.

​​“This is time for individual responsibility,” Mr Abbott told KPRC.