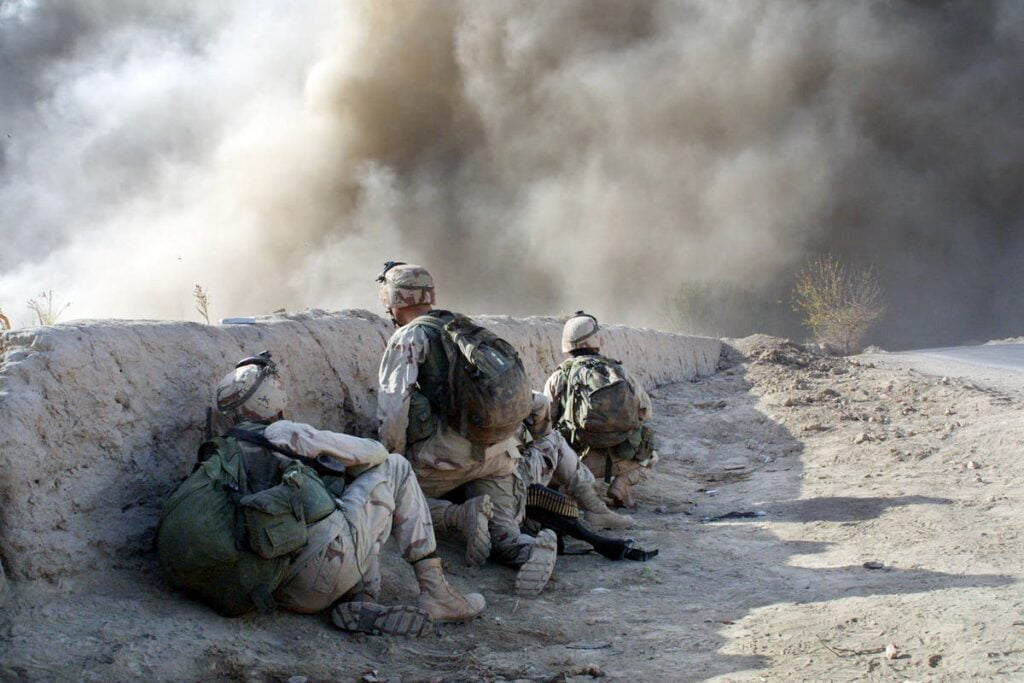 The US is fully withdrawing from Afghanistan, leaving the country after 20 years of war and more than 100,000 lives lost between Afghan civilians, military, coalition troops and militant fighters.

In the wake of the pull-out, critics from both sides of the political aisle have criticised Joe Biden’s decision to end the US’s presence in the country.

Mr Biden has been accused of abandoning the women and girls of Afghanistan, who will likely have their rights repressed under the renewed Taliban. Others have complained that the president did not commit to a nation-building project in Afghanistan, despite the fact that 20 years of investment and trillions of dollars have yielded nothing resembling a transformed and self-sustaining democracy in the country.

The US exit from Afghanistan and the Taliban’s return to power has caught US intelligence officials and the public at large by surprise. However, the US has been in the process – to varying degrees of success – of leaving the country for the past decade.

Why did the US leave Afghanistan?

Despite being a popular war in the US in the wake of the September 11th terrorist attacks, the American public cooled on it, seeing little return on their continued investment in a conflict with no clear end in sight.

According to a poll conducted by the Chicago Council in July, 70 per cent of Americans supported ending US troop involvement in the country.

For many Americans, the emotional investment in the US war in Afghanistan began to fade after the leader of the Al-Qaeda terror organisation and mastermind of the September 11th attacks, Osama Bin Laden, was killed in 2011.

Three years later, then-President Barack Obama announced the beginning of troop drawdowns in the country, proposing that US forces would be fully removed by 2016. During that time, US forces were tasked with training the military of Afghanistan’s US-backed government to defend the country after they left.

However, corruption in the Afghan government and hurdles in establishing a unified and capable military caused US officials to pull back from the 2016 deadline.

Former President Donald Trump campaigned on ending the war in Afghanistan, but was talked down by US military officials who feared that the government would fold to Taliban forces without US involvement.

While Mr Trump ultimately took that advice, in 2020 he held negotiations with the Taliban to pull out of the country by 1 May 2021 and agreed to release 5,000 Taliban prisoners. In exchange, the Taliban agreed not to attack Americans while they were evacuating and to begin peace talks with the Afghan government. Those talks eventually fell apart.

The Taliban did not adhere to its end of the deal, and neither did Mr Biden adhere to Mr Trump’s deal after he took office in 2021.

Thanks to its victories and a decreased US presence, the Taliban grew its power. While a renewed US troop presence likely could have beaten back the Taliban again, there was no indication that American voters would support the loss of American lives and further monetary investment that such a mission would require.

Mr Biden responded to the will of the American public and declared that he intended to remove all US troops out of Afghanistan by the 20th anniversary of the September 11th terror attacks.

Even if Americans supported further involvement in Afghanistan, there was no indication that further investment would result in a stable democracy with the capability to defend itself from the Taliban.

Estimates by the Cost of War project suggest the US spent $2.26 trillion on the war, including the costs of building and training the now-collapsed Afghan army. Ivo Daalder, a US Ambassador to NATO from 2009 to 2013, told NPR that after all the time and money the US poured into the country, it failed to produce a sustainable state.

“And for his critics who say, ‘Oh, if we had just stayed a little longer we would have avoided the situation.’ If you weren’t able to do what needed to be done in 20 years, why do you think 21 or 22 years would have done the trick?” he said.

Further, a report from the Special Inspector General for Afghanistan Reconstruction, a US watchdog agency monitoring the US mission in Afghanistan, recently published a report outlining the “many failures” of the past 20 years.

“Twenty years later, much has improved, and much has not,” the report read. “If the goal was to rebuild and leave behind a country that can sustain itself and pose little threat to US national security interests, the overall picture is bleak.”

Between American public sentiment and a lack of real progress toward leaving a sustainable government, it is highly unlikely that Americans would support a renewed effort to spend US lives beating back the renewed Taliban.

How many people died in Afghanistan?

Since 2001, 2,443 American troops were killed while fighting the war in Afghanistan. An additional 1,144 allied troops also died, including 457 British forces personnel or Ministry of Defence civilians.

More than 71,000 civilians are believed to have died as a direct result of the war, according to the Costs of War project.

The number of civilian deaths is higher than the number of Afghan militants killed, which is estimated at approximately 66,000.

Further, the CIA trained and armed militant Afghan groups that have been accused of committing brutal human rights abuses against civilians, much like it did with the Contras in Nicaragua during the 1980s.

The Afghan landscape is also littered with unexploded ordinance and landmines, which will continue to pose threats to civilians for years.

Beyond the lives lost as a direct result of the war, the conflict has contributed to social decimation in the country, with malnutrition, poverty and illness rampant.

Deaths among Afghan civilians will likely continue to grow as the Taliban tightens its grip. US based advocates fear that interpreters and other Afghan nationals who cooperated with the US will be targeted by the Taliban. The US has evacuated more than 5,000 Afghans and is scrambling to find countries willing to house refugees fleeing the Taliban.

Why did the US invade Afghanistan?

The US war in Afghanistan was immensely popular in the aftermath of the September 11th terror attacks. Emotions were raw in the country, and Americans on both sides of the political aisle responded to the beat of war drums coming from the White House under then-President Bush.

Al-Qaeda, under its leader Bin Laden, took credit for the attack. None of the 9/11 hijackers were Afghan or Iraqi citizens. Most were from Saudi Arabia, an ally of the US with its own history of human rights abuses. The US maintains a friendly relationship with Saudi Arabia to this day.

The leader of the hijackers, Mohamed Atta, was Egyptian.

Despite the nationalities of the hijackers, the US focused its attention on Afghanistan, where the hijackers had trained with Al-Qaeda forces. Mr Bush demanded that the Taliban, who ruled the country, hand over Bin Laden and other Al-Qaeda members, a request which the Taliban rejected.

Under the banner of “the war on terror”, Mr Bush signed a joint resolution on 18 September, 2001, authorising the use of force against those responsible for the attacks. That resolution would later be used to justify the invasion of Afghanistan, domestic US spying programmes, and the detention of prisoners at the US war prison in Guantanamo Bay, Cuba.

Despite an overwhelming US response in Afghanistan beginning in October 2001 that quickly unraveled the Taliban and sent the militants into retreat, the US would ultimately fail to find Bin Laden until a decade later.

While the US mission remained to root out Al-Qaeda members and hunt Bin Laden, the chaos created by the conflict resulted in the US working to establish an interim Afghan government. The US mission expanded to include a nation building project, including the establishment of a US-friendly military intended to defend the country once the US left.

By 2003, the Bush administration had declared that “major combat” in the country had ended, an announcement that coincided with Mr Bush’s infamous “Mission Accomplished” speech celebrating victory in the then-concurrent war in Iraq. US forces would remain in conflict with the Taliban for another 18 years, spending trillions of dollars on a venture that would ultimately end in failure.

How much did the US spend on the war in Afghanistan?

The US spent $2.26 trillion on its venture into Afghanistan.

According to an analysis by Forbes, the war cost Americans $300m per day.

The staggering number includes $800bn in direct war-fighting costs, and $85bn to train the Afghan military, which collapsed in a matter of weeks after the US pulled out of Bagram Air Force Base in July. Another $750m a year went to paying the Afghan army.

Much of the war was funded with borrowed money. Researchers at Brown University estimate that more than $500bn in interest has already been paid, and that by 2050 the cost of interest on the US’s debts for the war may reach $6.5 trillion, or $20,000 per US citizen.

The US ultimately spent more money on the war in Afghanistan than it did on stimulus checks to help its citizens survive the economic stagnation caused by the coronavirus. Each year, the federal government spends approximately $79bn on education programmes, meaning the US has spent more on the failed war in Afghanistan over 20 years than it spent on education programmes by nearly $1 trillion.

Even the much lauded $1 trillion infrastructure bill – which was subject to months of negotiations and complaints by even some Democrats that its costs were too steep – is less than what the country spent fighting in Afghanistan.

While the two decade long war in Afghanistan and the war in Iraq came at an immense financial cost to Americans and an incalculable cost to the lives of Afghan, Pakistani and Iraqi civilians, there were some who benefited from the conflict.

According to an analysis by Pacific Standard, almost $5 trillion dollars was paid out to military contractors hired by the Pentagon, including Lockheed Martin, DynCorp, Black & Veatch, and Academi, formerly known as Blackwater, the mercenary company owned by Eric Prince, the brother of Mr Trump’s Education Secretary Nancy DeVos and ally to the former president.

Blackwater mercenaries carried out the Nisour Square massacre, in which 17 civilians were killed and 20 were injured in Baghdad. Mr Trump would go on to pardon four of the mercenaries who took part in the massacre.