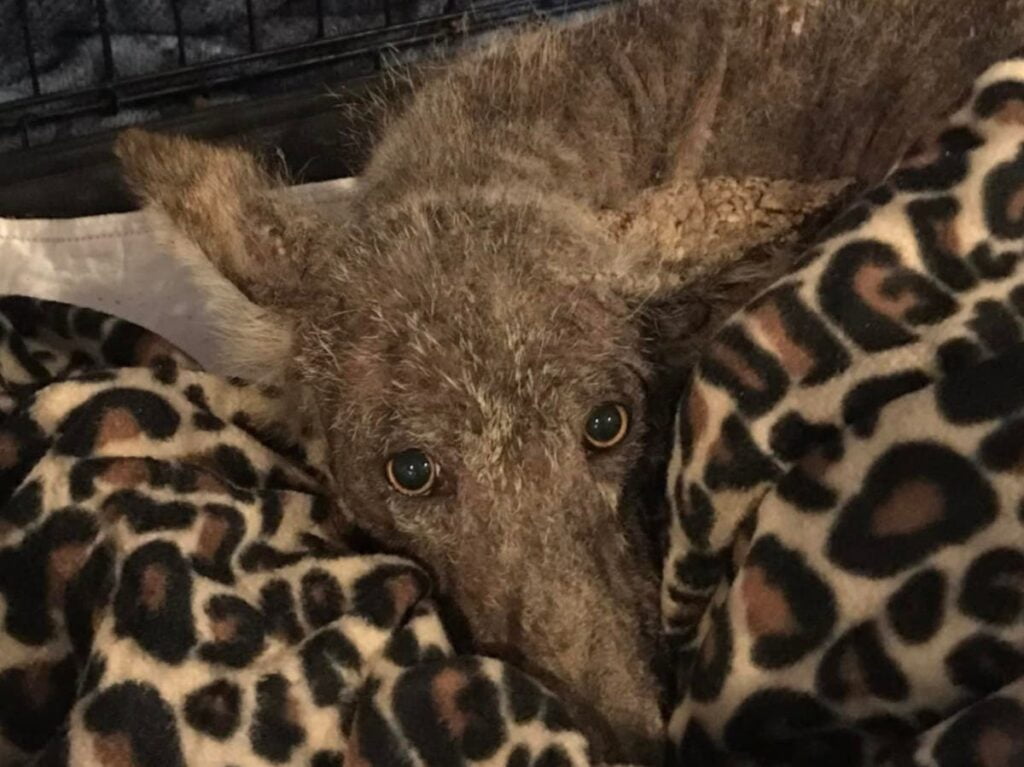 Experts are puzzled by a strange animal that a woman in Pennsylvania rescued outside her home.

According to News 4, Christina Eyth lives in Fairfield Township, and earlier this week noted that there were paw prints immediately outside her front door.

She followed the tracks, concerned that they belonged to the neighbour’s dog and that it was loose. Rather than guiding her to a familiar dog, the trail of tracks led her to something else.

When Ms Eyth discovered the animal, she said it was engaging in “scared behavior”, and was shivering in the cold. Temperatures in the county have seen lows in the single digits in recent weeks, and it was clear to Ms Eyth the animal was suffering.

“I peeked outside the door and that’s whenever I noticed the animal on my left hand side and it was so scared and so cold and shivering,” Ms Eyth told NBC News. “… All I could think about is ‘This animal needs help’.”

Ms Eyth managed to lure the creature into her basement, which solved the temperature issue. But she still had no idea what kind of animal she had rescued.

The animal appears canine, with the muzzle and face of a dog, but other features that more closely resemble a coyote.

Ms Eyth assumed the animal was either a dog or a coyote. Because she was not sure what she was dealing with, she called Wildlife Works, a local animal rescue that could transfer the creature and, hopefully, identify it.

One of Wildlife Works’ certified wildlife rehabilitators, Morgan Barron, told NBC News that she could not “definitively say what it is”.

“But to err on the side of caution since they can carry rabies and since it might be a coyote, we can keep it here, get genetic testing done, and then kind of go from there,” Ms Barron said.

She noted that the animal was rather timid, which leads her to believe it is most likely a dog. The creature is being kept in isolation while genetic tests are run to identify the animal. During its stay at the shelter is will also be treated for mange.

It’s not unusual for dogs or coyotes with severe cases of mange to look unrecognisable.

Some experts believe that many reported sightings of the legendary chupacabra are likely just coyotes with extreme mange.

In 2010, University of Michigan biologist Barry O’Connor told Mongabay News that coyotes with severe mange are weakened by their condition, which makes hunting more difficult. Livestock is easier for a coyote to hunt than wild creatures.

Mange can leave coyotes or dogs susceptible to skin infection, which in turn produces foul odors. Someone who stumbled onto a coyote with extreme mange might find themselves facing an “ugly, naked, leathery, smelly monstrosity”.

It remains unclear if the animal found in Pennsylvania was a dog or coyote, or if it headed for “chupacabra syndrome” before it was discovered in Ms Eyth’s yard.