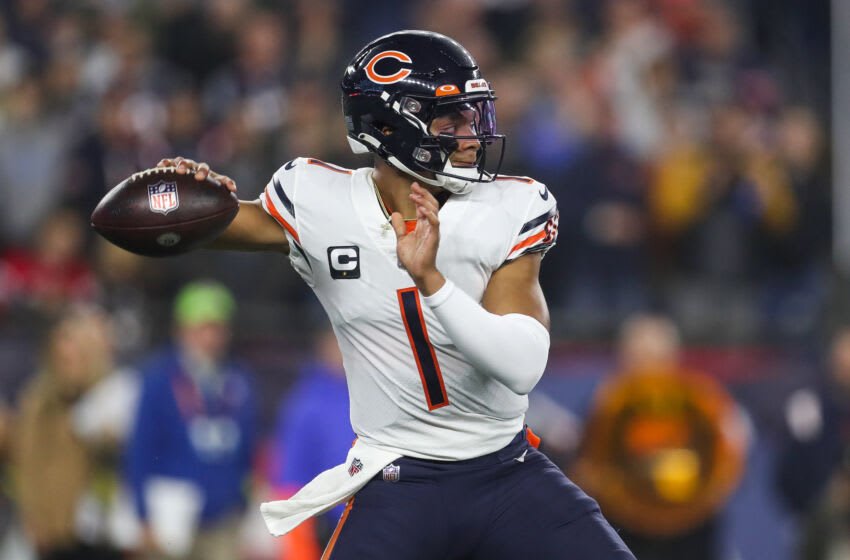 NFL Twitter had high praise for the Bears after they went on the road and complicated the Patriots’ QB debate between Mac Jones and Bailey Zappe.

The Patriots were big favorites over the Bears on Monday Night Football at Gillette Stadium.

Chicago laughed in the face of those odds.

What looked like the Bailey Zappe show for a quarter turned into a party for Justin Fields and Chicago in a dominant 33-14 victory.

Best memes and tweets after Bears shock the Patriots

This is the best Bears game I’ve seen in so many years man. Our young team just went into New England and beat the absolute shit out of a Bill Belichick coached team on the road

I can’t believe that happened

My only question. Did you really think the Football Gods were going to let Belichick beat George Halas victory record against the Bears? Wasn’t going to happen

This is a BIG win for the #Bears. This is something you can build on and can change the feel of the season not only for Justin Fields but for the entire roster.

Bill Belichick gave us a 1,000+ word answer on how good the Bears are earlier in the week.

He is going to give us 5-7 words max postgame on why they lost.😭😭😭#Patriots #Bears

Fields had the Bears up 10-0 after one quarter. Then Bill Belichick made a big move and benched starter Mac Jones for Bailey Zappe. Two touchdown drives later the backup was being crowned as the future in New England.

However, a terrible second-half performance from the quarterback, including two interceptions and a fumble, had people rethinking that assessment in record time.

I like to imagine there was at least one kid born in a hospital tonight in Boston in the middle of the Good Zappe drives who is now named Bailey and will have an even more awkward naming story than Party of 5,

At the same time, Fields got the Bears cooking. They pulled away with 23 unanswered points after falling behind 14-10.

In total Chicago’s quarterback threw a touchdown and rushed for another score. His performance went a long way to reinforce his position as the Bears’ starter right now and going forward.

Chicago had never won in Foxborough in four previous tries. They got their first win in that hostile environment in the most emphatic fashion.

There was even more meaning to the win with Belichick on the opposing sideline. The Patriots head coach is tied with Bears legend George Halas for career victories as a head coach. Belichick’s next win will take him past Halas and give him sole possession of second place all-time. Chicago made sure Belichick wouldn’t pass Halas on their watch.