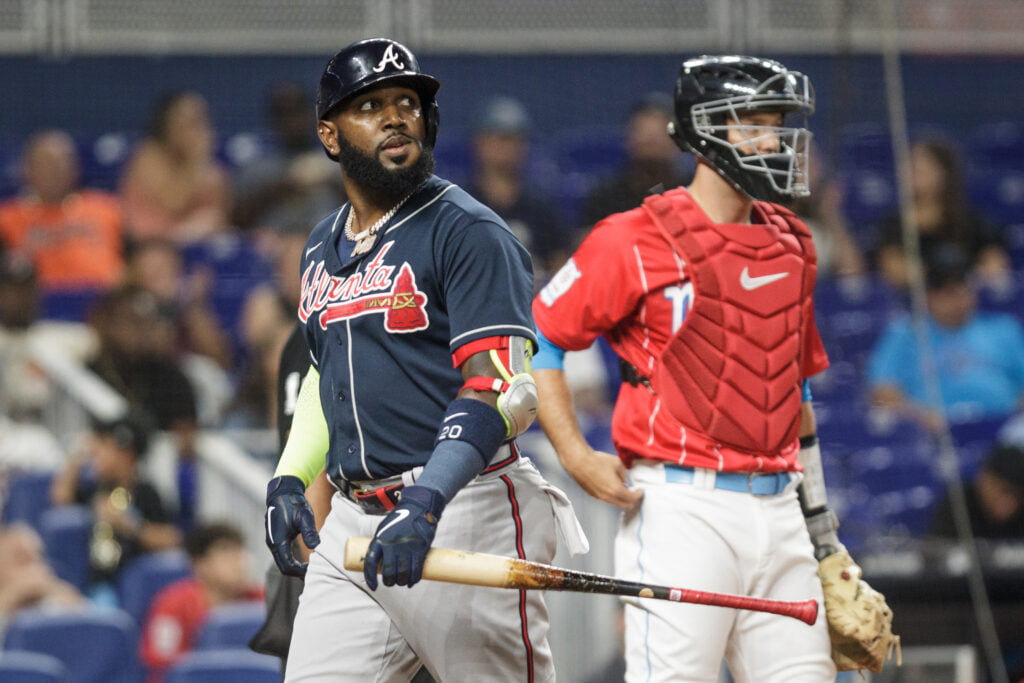 MIAMI, FLORIDA - AUGUST 13: Marcell Ozuna #20 of the Atlanta Braves reacts after striking out during the 2nd inning against the Miami Marlins at loanDepot park on August 13, 2022 in Miami, Florida. (Photo by Bryan Cereijo/Getty Images)

The Marcell Ozuna era of Atlanta Braves is probably coming to an end after his latest arrest.

After getting benched during the four-game home series vs. the New York Mets, Ozuna was arrested by Norcross police on Friday morning for driving under the influence and failing to maintain his lane. This is not Ozuna’s first trouble with the law in an Atlanta uniform, as he was infamously arrested during a domestic violence dispute in his Sandy Springs home last summer.

Ozuna is in the midst of year two of four-year deal worth $65 million he inked with the Braves.

Despite the Braves taking three of four from the Mets and procuring a soft-serve machine as promised by general manager Alex Anthopoulos, once again Ozuna has become a distraction. He may have been brilliant at the plate during the 60-game 2020 COVID season, one where he led the National League in home runs and runs batted in, but the Braves need to cut all ties with him now.

This team has too many positive things going for it to keep a guy around who cannot stay on the straight and narrow, or make regular contact at the plate. Ozuna may have 20 home runs on the season, but he is slashing a dismal .214/.263/.393. Although the Braves will still have to pay him through the 2024 MLB season, The Battery is a total cash cow that can sustain the financial hit.

With Eddie Rosario coming back from his eye injury, Robbie Grossman hitting well since being traded over from the Detroit Tigers and Vaughn Grissom scoring runs at will since getting called up from Double-AA Mississippi, there really is no place for Ozuna on the roster, especially once Ozzie Albies makes his triumphant return from a broken leg. Do the right thing and just end this, Braves.

The Braves issued a comment shortly after noon on Friday about Ozuna’s evolving situation.

Atlanta cannot afford optically to keep around persona non grata any longer, no matter the cost.