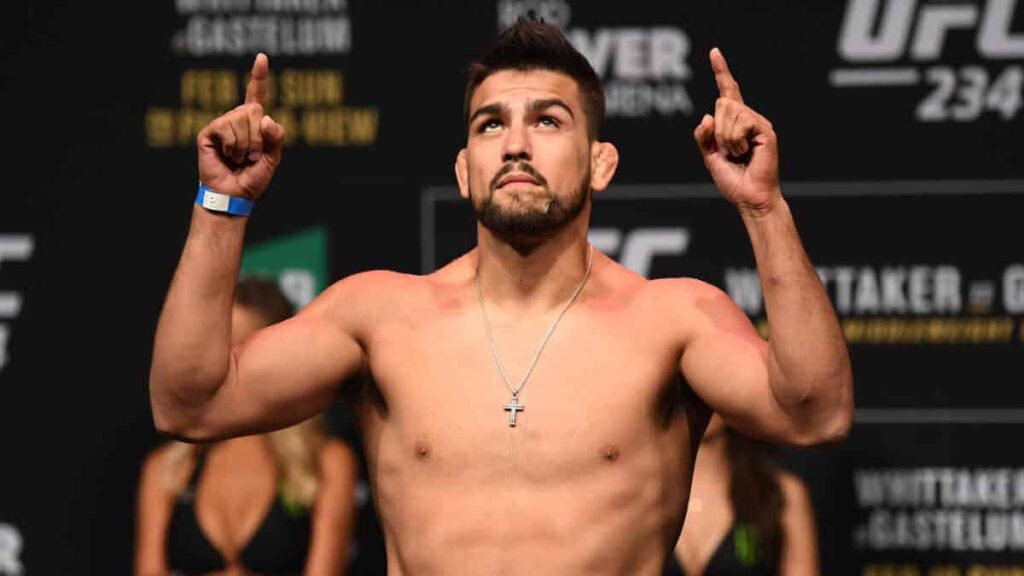 No matter what path an individual chooses in life, there will inevitably be turning points along the way that greatly influence their ultimate destiny. Every person will encounter a set of circumstances that forces them to rise to the occasion or succumb to the pressure.

Not long after he was discharged from the Marines, Michael Corleone’s father, Vito, was the victim of an assassination attempt arranged by Virgil Sollozzo, a drug kingpin positioned to gain power if Vito were to die.

While Don Corleone clung to life in the hospital, his son Michael made a decision that would forever change the trajectory of his life. Up until then, he had been a civilian who chose to abstain from the Corleone Family’s dealings in organized crime. However, with his father on life support, Michael killed Virgil Sollozzo in an act of revenge. He would never be considered a civilian again…

On August 21st, Kelvin Gastelum will be faced with a turning point in his career as a fighter. He has been considered one of the best middleweights in the UFC for years. However, his upcoming fight against Jared Cannonier will have a residual impact on the rest of his career. If he emerges victorious, the perception that he is among the elite fighters in the division will be maintained.

However, if he loses he may be relegated to Fight Nights at the Apex Center; it could be a long time before he’s selected for the main card of another pay-per-view event. Although the fight is not part of a single elimination tournament, Kelvin Gastelum has to come out on top the next time he steps into the octagon. His career is dependent on it.

Gastelum is favored to win

No fighter wants to lose in the heat of competition. However, their response to losing often depends on the caliber of their opponent. Decades after losing to Muhammad Ali in “The Rumble in the Jungle,” George Foreman has done several interviews praising the craftiness of “The Greatest” in luring him into the rope-a-dope with an unexpected strategy.

Kelvin Gastelum finds himself in a similar situation on August 21st. At 37 years old Jared Cannonier is almost a decade older than Gastelum. He’s also never been considered one of the elite fighters in the division.

Sure he has a lot of fights under his belt and should not be taken lightly, but he has never headlined a pay-per-view event or been given a title shot. Gastelum has enjoyed the pleasure of both being a headliner and participating in a championship fight.

Losing to an opponent everyone expects him to beat would be a major setback for his career.

In every team sport, there is the underlying theme of the culture of the organization. Often, head coaches will praise undervalued contributors for their locker room presence. In essence, this means that the player upholds the expectation of winning. They’re supportive of their teammates and coaches and they fully expect the club to emerge victorious whenever they step onto the field.

The same can be said of athletes in individual sports. Although mixed martial artists are in the octagon alone, there’s a reason their camp accompanies them from the locker room to the main floor. It takes a team of dedicated professionals to help the athlete prepare. Kelvin Gastelum is a member of Kings MMA.

The organization has stood by him through all 16 of his wins and each of his seven losses. Unfortunately, four of those losses have come in his last five fights. Gastelum is a name casual UFC fans would easily recognize; that doesn’t happen because of losing streaks. That happens because of wins.

He needs to win his next fight, not just to avoid a prolonged losing streak but to restore his team’s faith in him. Otherwise, necessity may dictate that they put more time into promoting one of their best prospects instead of their well-known warrior.

Another shot at the title

Kelvin Gastelum got a shot at the interim middleweight title in April of 2019. His opponent was the brash Israel Adesanya, a fighter who was undefeated at the time. On that night, “The Last Stylebender” emerged victorious with a unanimous decision.

If Gastelum had been able to take home the interim belt, his next step would’ve been a match against Robert Whittaker for the unified middleweight championship. Instead, he was forced to go back to the drawing board and figure out his next step.

Since failing to cash in on the enormous opportunity he was given in 2019, Gastelum has not been granted another shot at the title. Losing four out of five matches is certainly not the way to get there.

The UFC is notorious for not having a clearly defined path to a title fight. This allows the organization to skip protocol and put together the fights fans want to see. If Gastelum wants to be in a title fight, he will need the support of the fans. He must win on August 21st in order to do so.

Time is of the essence

For Kelvin Gastelum, the time to take the next step in his career is now. In October, he will turn 30 years old. While he is certainly not an old man, he’s no spring chicken. He wouldn’t be the first man over 30 to become UFC champion, but doing so would certainly go against tradition.

Gastelum must seize the moment on August 21st and push his career in the right direction. If not, he’ll be remembered as a fighter who climbed into the ring with the likes of Michael Bisping, Robert Whittaker, Tyron Woodley and Israel Adesanya, but was never able to reach the level of success or recognition they achieved.

Kelvin Gastelum’s next fight represents a turning point in his career. He’s overcome adversity and risen to the occasion before. On August 21st, the world of mixed martial arts will be watching to see if he can do it again.