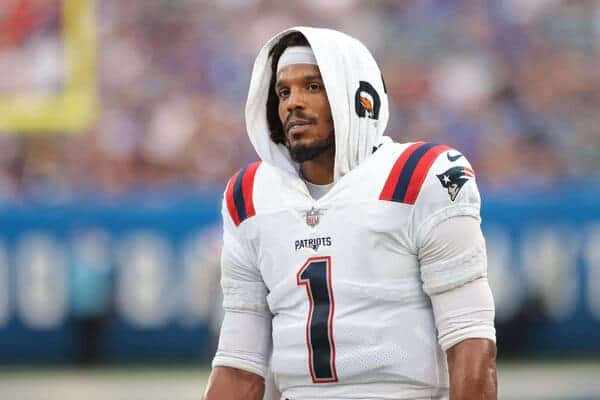 One idea currently being toted around is the player’s antics surrounding coronavirus – Newton has decided to remain quiet about his vaccination status. This has become increasingly problematic since the NFL have started to pressurise teams to ensure player availability through vaccine uptake.

Newton’s silence will have damaged his reputation in the building. This is especially the case since he missed valuable game weeks last season after contracting covid and more recently broke the NFL’s coronavirus-safety protocols – which are more stringent for unvaccinated players. His recent infringements meant that he missed a pre-season road match to Kansas City.

New England coach Bill Belichick has admitted that Newton’s vaccination status had nothing to do with his release but whether this holds true is highly dubious.

Anyhow, it is important to note that Newton’s covid crisis is a contributing factor to his dismissal, not the sole reason. Had Cam been playing impeccably, his starting role would never have been in question, even with this covid drama.

Unfortunately for the former Carolina player, his form in New England has been far from impeccable. Last season Newton completed 65.8 % of his passes for 2,657 yards, 8 touchdowns and 10 interceptions. He rushed for 12 touchdowns but this impressive haul does not cover up the disappointing touchdown-interception ratio with which Newton ended the season with. It has been no secret that Newton’s passing game has struggled in recent seasons.

In response to Newton’s mediocre season, New England decided to draft the National Championship winning quarterback out of Alabama – Mac Jones – as their 15th overall pick. Jones had an impressive college season which saw him come third in the overall Heisman Trophy votes. His poise and patience in the pocket, and experience working with an NFL style offence in Alabama, would have appealed to Belichick. And if we just look at his season statistics over 13 games, where Jones completed 77.4 % of his passes for 4,500 yards, 41 touchdowns and 4 interceptions, it becomes evident that he is a much hotter prospect than Newton currently is.

Whether Jones would get to start this season was dubious after the draft but, when Newton missed crucial pre-season games after breaching covid protocols, Jones took the reigns and never looked back. His performances have been highly assured, demonstrating why he was so successful at the collegiate level.

Former Patriots defensive end Rob Ninkovich has claimed that, throughout the preseason, Jones was finding it easier to memorise New England’s playbook than Newton was. Ninkovich goes so far as to say that Jones, a rookie, was helping Newton, a former NFL MVP, learn the playbook.

The exceptional claims are based on hearsay but they point towards the obviously limited belief which Belichick and his coaching staff have in Newton. In truth, the rumour seems to indicate how much Jones has impressed upon arriving in Boston, which has placed a huge strain on Newton’s place in the team.

Jones also has the added benefit of being an almost carbon copy of a certain Patriots legend Tom Brady. Neither Jones nor Brady is known for their physical prowess which means that they both rely upon smart game sense and accuracy when throwing the ball. Newton by comparison is known for his insane physique and superman runs with the ball in hand.

Consequently, Mac Jones is much more in tune with the mould of quarterback New England and its coaches are used to. For offensive coordinator Josh McDaniels, Jones symbolises a mould of player he has enjoyed success with before. Newton doesn’t. It is not hard to imagine that McDaniels is salivating at the idea of calling plays suited to a less mobile quarterback, as he was doing just two seasons ago. After all, he managed to strike up a partnership with Tom Brady which culminated in them winning championships together.

Whether McDaniels can replicate the same form with Jones is yet to be seen, but the skeleton for success seems to be there – build a strong offensive core, give Jones time to pass and give him reads to build upon.

But this still doesn’t truly explain why Newton has been ejected from New England. No matter how good a rookie is, they often need an older head in the building to steer them in the right direction. However, Belichick and McDaniels will feel as though they are more suited to do this than Newton, whose playing style could not clash more with Jones’.

Additionally, Newton was brought in last season on a one-year contract for mere pennies, making his departure financially unencumbering. It was always seen as more of a shot in the dark than a genuine long-term solution to the departure of Tom Brady to the Bucks. Changing a quarterback culture in one season is never truly feasible but Jones is crucially a continuation of that Patriots quarterback culture.

This is why Mac Jones is the future in New England and Newton is now part of the past.