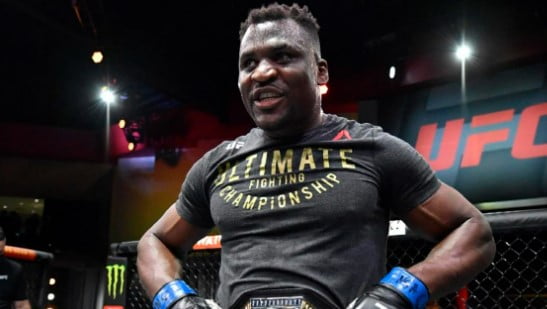 With “Iron” Mike Tyson sitting ringside, Francis Ngannou’s corner could be heard reminding him to use the “Mike Tyson head movements.” It was a reference to the “bob-and-weave” tactics made famous by legendary trainers Teddy Atlas and Cus D’Amato in the early ’80s. Ngannou would heed his team’s advice and the results were surprising. That was just one of several classic moments from UFC 270. Ngannou versus Gane lived up to the hype; it was a great night for mixed martial arts enthusiasts. Without further ado, let’s get into it!

Francis Ngannou and Ciryl Gane climbed into the octagon for the most highly anticipated heavyweight UFC fight since Brock Lesnar fought Randy Couture at UFC 91. As the event grew nearer, Gane became the favorite to emerge victorious by the odds-makers. Considering his position as the reigning champion, Ngannou had to see that as an insult. One has to believe he used that as motivation during training leading up to the fight.

In rounds one and two, Gane stayed on the outside and continuously outpointed Ngannou. The champion’s frustrations could be seen on his face. He is so used to tagging his opponents and hurting them early that being unable to touch the man in front of him presented a dilemma. Gane’s agility was impressive, however, Ngannou stayed aggressive in his pursuit. The difference in these two men’s fighting style is reminiscent of Roberto Duran and Sugar Ray Leonard. Ngannou is equivalent to Duran; he wants to stand in the middle and exchange blows. Gane is equivalent to Leonard; he would rather use his footwork to find his opponent’s weakness before dishing out punishment.

Round three was the turning point of the fight. Well aware that he was down two rounds to none, Ngannou knew that his usual strategy of landing power shots early would have to be abandoned. Early in the round, Gane attempted an ill-advised kick. Ngannou wisely caught Gane’s leg mid-air and used his momentum to work his way into a hold. From there he lifted Gane off the ground and slammed him to the mat. It was a tremendous display of power and a huge momentum shifter. Although Gane eventually fought to his feet, Ngannou was able to score another takedown before the end of the round and score a lot of ground-control time as well.

In rounds four and five, Ngannou’s superior strength was on full display. Both of these men are 6’4″ tall and Ngannou is only ten pounds heavier, but there was no mistaking who the naturally brawnier man was tonight. Yes, Ngannou has a fierce training regimen, but there is also something to be said for DNA. His strength, power and physique cannot be accomplished by the weight room alone; freak athletes like Ngannou owe a debt of gratitude to their genes as well. While the multiple takedowns he scored were impressive in rounds four and five, the flurry of punches he ended each round with were equally as important in letting the judges know he’d won the round. For his efforts, Francis was awarded a unanimous decision victory. It was the first time in his UFC career that he’d won after going the distance; every other victory came by way of a stoppage. Hail to the King. Francis Ngannou still reigns supreme in the heavyweight division.

This was a very close fight and a very difficult battle to score. Each fighter did certain things well, and each fighter had moments I’m sure they wish they could have back. Deiveson Figueiredo came into this fight the lightest he’s ever been. He was considerably less bulky; he wanted to match Brandon Moreno’s agility. This backfired because his increased agility robbed him of his elite power. Instead, it was Moreno’s shot that landed with the most impact and caused the most damage throughout the fight.

Moreno’s surprising power advantage became evident in round one when he landed a right handed strike that clearly dazed Figueiredo. Deiveson was able to score on calf kicks, but otherwise he was ineffective for most of the round. in round two, Deiveson displayed his defensive skills when he was able to avoid a takedown by Moreno and counter with a power shot of his own. Round three saw Deiveson return to his former glory; he landed several huge strikes and nearly knocked Moreno out near the end of the round. If there had been fifteen more seconds left, Deiveson most likely would have won by a stoppage.

Rounds four and five were very even, with each men having their moments of success. Round five ended in a fierce flurry of punches as both men decided to “let it all hang out” and had to be separated by the referee. All three judges awarded Deiveson Figueiredo a unanimous decision victory. That means that after three fights, these two warriors have one victory apiece and one draw between them. In the post-fight interview, Figueiredo promised Moreno he would have a fourth fight with him, and even went so far as to say the venue could be in Moreno’s native country of Mexico. Whether that actually happens or not, remains to be seen.

Andre Fialho accounted himself well in his UFC debut. Unfortunately, he was matched up with an experienced UFC veteran, Michael Pereira, who has been one of the most underrated performers in the welterweight division for years. Fialho was the clear winner of round one and appeared to have the momentum on his side. However, Pereira was unphased and dominated round two, evening opening a nasty cut over Fialho’s left eye in the process. With the fight even at one round apiece, Pereira dominated the third and final round. For his efforts, he was granted the unanimous decision victory by the judges.

This was one of the quickest fights I’ve ever seen. It took Said Nurmagomedov all of 47 seconds to submit Cody Stamann. It started with a spinning back-fist. Nurmagomedov, followed that with a spinning side-kick. When Stamann tried a kick of his own, Nurmagomedov caught his leg in the air and took him to the mat. From there he put his opponent in the guillotine hold and forced him to tap out. Just like that, a fight can be over; my condolences to the fans who went to the kitchen to grab another beer and found out the fight was over by the time they got back to the living room.

Michael Morales is only 22-years-old. Tonight, he performed like a man who was ten years older than that. Trevin Giles, on the other hand, spent years in the middleweight division. Tonight was his first performance at welterweight. After Morales made quick work of him in the first round, Giles may want to consider returning to middleweight. Morales hit Giles square on the chin and he was never able to recover. Eventually, Morales found himself on top of a helpless Giles, pummeling him with punches the entire time. At that point, the referee had seen enough. He mercilessly stepped in and stopped the fight in the first round. Michael Morales is a star in the making.

While Ciryl Gane is an excellent fighter, there is no substitute for power. Francis Ngannou displayed his superior strength by dominating Gane on the mat, which is something we’ve never seen him do before. Ngannou’s sheer muscle mass was intimidating, but Gane made a crucial mistake that may have cost him the fight. Round five started off fairly even and Gane scored an early takedown. However, he tried to secure an ankle lock on Ngannou before he had the clear advantage. This allowed Ngannou to slip out of his grasp and go on to win the round. If Gane had been more patient and less eager, he may have been able to secure the hold a few seconds later, and possibly win the fight. Gane is very skilled, but there is no substitute for experience. Ngannou had his heart broken in 2018 when he suffered back-to-back losses that derailed his title hopes. Gane must show the same resolve now, if he is ever going to be champion.

The UFC will return on February 5th with another edition of Fight Night from the Apex Center in Las Vegas. Stay tuned to World In Sport for the latest coverage; as always we’ll have all the updates about the outcomes of the fights as well as in depth analysis. Until next time, take care of yourselves, and each other.