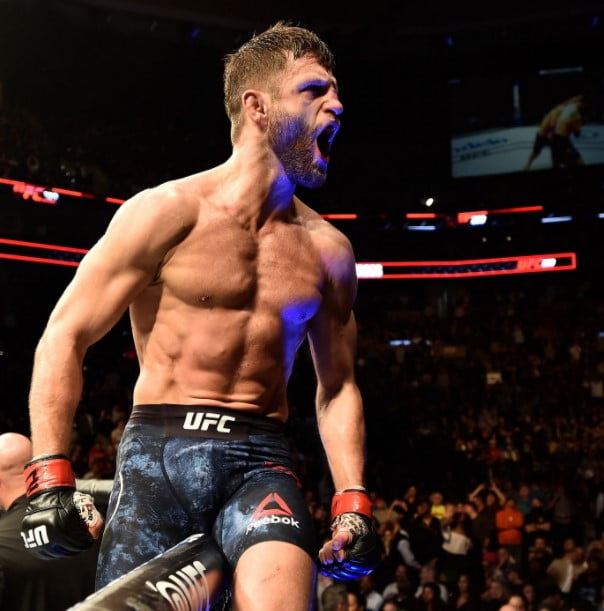 Although a mere four weeks have passed since the last UFC Fight Night, it felt like it had been a long time since the raucous crowd at The Apex Center could be heard screaming at the top of their lungs. It was great to see the fans standing to their feet and high-fiving each other in between rounds. The fighters themselves did not disappoint; the action was intense and the first event of 2022 was worth the wait. Without further ado, let’s get into it!

Calvin Kattar and Giga Chikadze spent the majority of round one on the mat in a very active grappling contest. While Kattar proved to be the better wrestler, Chikadze showed that he would not back down. Given their backgrounds, it would make sense that Kattar had a decided advantage on the mat. Kattar was a successful amateur wrestler before turning to mixed martial arts. Chikadze was a professional kick boxer before moving to the United States and becoming a UFC fighter. Each man played to his strengths in the opening round.

From round two, through the remainder of the fight, the two men primarily exchanged strikes, with elbows and kicks mixed in for good measure. Kattar showed why he has gained a reputation for having some of the best cardiovascular fitness in the entire featherweight division. His constant forward pressure seemed to keep Chikadze on his heels the entire round. The biggest moment of round two was a knee to the jaw from Kattar to Chikadze. In round three, Giga responded by becoming more active and it worked; Kattar was not able to keep up his constant pressure the way he did earlier in the fight.

Rounds four and five are where Kattar picked up the intensity and made a statement that the rest of the featherweight division won’t soon forget. A big elbow shot opened up a cut on the bridge of Chikadze’s nose. Kattar also unleashed some impressive striking combinations that showed he has clearly been working on his boxing. Chikadze was struggling to stay on his feet for the majority of round five. Near the end of the round, Chikadze landed a combination that sent his opponent crashing to the mat. Although there was less than a minute left in the round, the referee considered stopping the fight. For his efforts, Kattar was awarded a unanimous decision victory. It was an impressive performance. Going into the fight, Kattar was ranked as the fifth best featherweight in the division. It will be interesting to see where he lands when the new rankings are released next week.

Jake Collier made quick work of Chase Sherman in their heavyweight showdown. The two men started round one by trying to exchange strikes. The few punches that were able to connect landed with a thud. It was clear that both of these men were heavy hitters and there was absolutely no chance this fight was going the distance. Sherman decided it was time to change strategies. He threw an ill-timed lazy kick and Collier was able to catch his leg in the air. From there, he was able to force his opponent to the mat using his momentum against him. Once they were on the mat, Collier began pummeling Sherman with elbows that damaged his resolve. Lastly, he put his opponent in a rear naked chokehold that forced him to tap out. It was an emphatic first round submission victory for Collier who is sure to garner more opportunities after this impressive performance.

Brandon Royval and Rogerio Bontorin are two of the most evenly matched flyweights in all of the UFC. After tonight’s hotly contested match, that remains true. This fight was so tough to call that a rematch is not out of the question. There is no clear edge here; if they fought ten times the result may be five wins apiece.

Given Bontorin’s reputation as one of the best counter punchers in the division, Royval decided to go with a strategy that relied heavily on feints and head movement. I couldn’t help but be reminded of seeing Shawn Porter use these exact same tactics against Errol Spence when they fought in 2019. However, Bontorin must have anticipated this strategy; he did not take the bait and commit any silly mistakes in round one. Outside of a takedown by Bontorin near the end of the round, the opening period was relatively uneventful.

The action picked up in round two as both men landed a significant number of strikes. While Royval landed with more frequency, Bontorin was clearly the stronger of the two fighters and his punches made the bigger impact. Round three was the most eventful round of the fight; an arm-bar by Royval early on almost forced Bontorin to tap out. Royval finished the round with an impressive flurry of punches. He was awarded a split decision victory. His near submission and subsequent striking flurry in the final round are clearly the moments that tipped the scales in his favor. It was a well-deserved victory.

Back in November of 2019, Katlyn Chookagian and Jennifer Maia faced off in Madison Square Garden at UFC 244. That fight happened on the prelim lineup. Tonight’s fight between the same two women in the flyweight division took place on the main card.

The biggest moment of round one belonged to Chookagian when she landed a big takedown followed by lots of ground control time. In round two, Maia responded by landing a barrage of strikes and opening up a cut under Chookagian’s right eye. In round three, Chookagian completely dominated the fight. Her superior timing led her to a decisive edge and an impressive advantage in strikes landed. For her efforts, she was awarded a unanimous decision victory. She is now undefeated in two bouts against Maia; a third fight between the two seems highly unlikely.

Dakota Bush and Slava Borshchev are two of the most inexperienced fighters on UFC’s roster. This battle between the two lightweights was largely meant to determine which of them would continue getting big opportunities and which of them would be forced to fight on prelims for a little while longer. Borschev landed a huge body shot to the ribs of Bush in round one that sent him crashing to the mat. He then pummeled his opponent with ground and pound shots that forced the referee to stop the fight. From the looks of things, the punch that ended the fight most likely resulted in cracked ribs for Bush. Borshchev’s post-fight dance-celebration was almost as impressive as his performance during the fight.

Bill Algeo was able to outpoint Joanderson Brito in all three rounds of their featherweight matchup. His impressive body-slam of his opponent in round one seemed to set the stage for the rest of the fight. Brito had a nice striking combination near the end of round two, but that would be his only highlight of the night. Algeo’s final push in round three left the judges with no choice but to award him with the decision. After mounting Brito’s back, he proceeded to elbow him in the head repeatedly. Afterwards, Algeo was granted a unanimous decision by the scoring panel.

Nothing could stop me from watching next week’s pay-per-view bout from the Honda Center in Los Angeles. There are two main event fights that are sure not to disappoint. The first is the third installment of the saga between Brandon Moreno and Deiveson Figueiredo for the Flyweight Championship of the World. The first two fights were instant classics. The trash talk between these two has not been friendly this time around; they are sure to treat fight fans to a war when they climb into the octagon together. The main event of the evening will feature Francis Ngannou against Ciryl Gane for the Heavyweight Championship of the World. These two men are former sparring partners and undoubtedly the best two heavyweights on the planet. Expect sparks to fly; it will be an absolute miracle if this fight goes the distance. I can’t wait! As always, World In Sport is the place to go for all the latest updates about the outcomes of the fights as well as in depth analysis. Next week’s event is sure to be epic; make sure you’re watching. Until next time, take care of yourselves, and each other. Hi! This is Patricia Minjares. The owner of this website. I am an SEO expert. I have 7 years of experience in SEO.