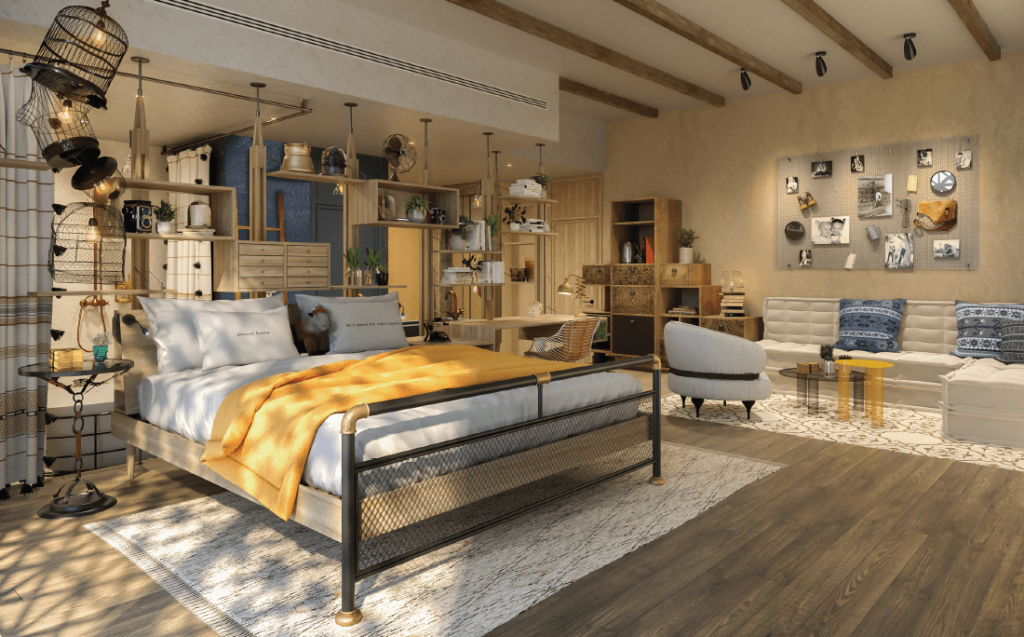 25hours Hotel One Central is set to throw its doors open in Q4 2021 in Dubai. The very first 25hours hotel to launch in the Middle East, the highly anticipated outpost will celebrate and champion individuality, reverberating the mantra that 24 hours is simply not enough.

Overlooking the Museum of the Future and boasting 434 rooms and suites, 25hours Hotel One Central tells the region’s story through its interiors, combining the ancient traditions of the Bedouins with a progressive, forward-thinking design and a nod to the future. Impactful, breath-taking and phenomenal design awaits at the UAE outpost.

Masterminded by interior design firm, Woods Baggot, elements of tales where the traditional meets the modern are intricately woven and exhibited floor-by-floor, creating an entirely contemporary narrative, promising a truly one-of-a-kind experience. Prepare to be electrified!

Offering a unique take on co-working spaces, 25hours Hotel One Central provides an inviting space fully equipped with a modern ‘open’ pantry concept to encourage a community feel, allowing local heroes to connect with the well-travelled. A paint and pottery studio, podcast recording room and record decks also add another stellar dimension to the offering in true 25hours style.

Additionally, 25hours Hotel One Central has partnered with MINI to allow guests with a sense of adventure the opportunity to get out and explore the city on their own terms.

Christoph Hoffman, CEO 25hours said: “From the beginning of this adventure our aim was to create a new Dubai experience of hospitality. We want it to become the living room, the party cellar, the speak easy, the romantic hide-a-way for lovers as well as the place for relaxed and creative business meetings, inspirational various spaces, a fun rooftop for visionary thoughts and views.“

With 12 unique hotels in nine cities including Berlin, Paris, Zurich and Vienna, the group isn’t about making you feel at home with familiar surroundings and a uniform aesthetic.

The post European disruptor 25hours gears up to make its mark in Middle East with Dubai debut appeared first on Travel Daily.