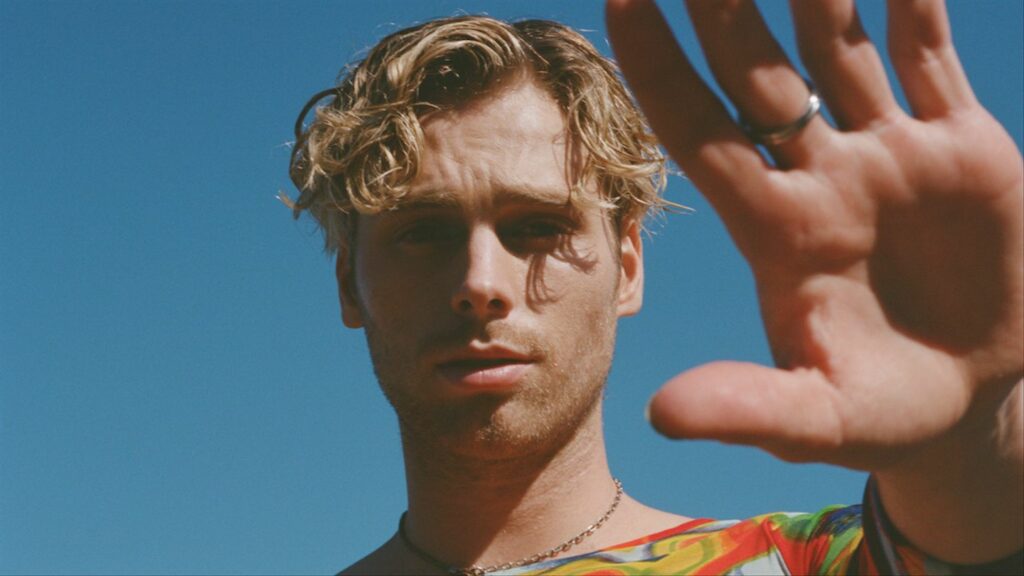 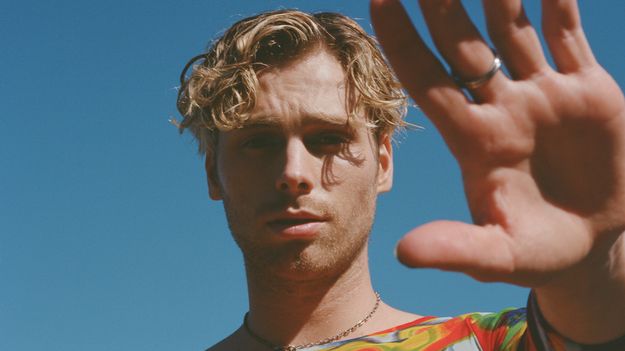 Luke Hemmings began writing what would become the song “Starting Line” after hearing the synth riff his producer, Sammy Witte, had come up with. When Hemmings got to the piano, the lyrics just started to flow: “In and out of focus, moments that I keep…”

“I’ll just sit down [at] an instrument and something, it’ll just come out,” Hemmings tells MTV News. “And then I’ll sort of have to catch up to it and figure out, well, what did that mean? And why did those words come out?” It was a fitting process for creating his solo album, When Facing the Things We Turn Away From, arriving August 13, a project that has allowed Hemmings to reflect as he catches up to a whirlwind career.

At 25, Hemmings’s life in the music realm has already lasted a decade. He has played guitar and sung in 5 Seconds of Summer since he was 15, and these last 10 years have been non-stop — Hemmings didn’t have a breather or time to process it until the pandemic started. 5SOS put out their fourth album, CALM, on March 27, 2020, making them among the first groups to have to promote an album solely digitally, trading playing shows for Instagram Lives and YouTube videos in order to stay connected to fans, and with each other. It also meant no touring, and staying at home.

Hemmings decided to put that time to good use honing his skills. “I love that aspect of being in a studio and trying to get better as a writer and I started doing more production stuff at home,” he says. “It just started as me trying to write a full song on my own again. And that’s kind of where it blossomed from, and obviously, it snowballed a lot from that moment.”

Hemmings speaks over Zoom from Los Angeles, in the room where he did some of the writing for this album. He points out the couch and synths in the background, which were used for the writing of stripped-back, piano-driven “Bloodline” and glittering, synth-heavy “A Beautiful Dream,” respectively. At first, Hemmings was just making songs without any real plan for what to do with them. Writing on his own, without his band, “allowed me to make music with no preconceived notion,” he says. “It was like an open playing field.”

Having to stay at home because of the pandemic, Hemmings was able to spend more time on the finer details of his music. “At that time, in the middle of COVID, there was just endless time. So I could just do whatever, spend six hours on a synth sound or just hang at home and wait for a song to arrive for a week,” he says.

As he kept writing, he began to explore new sounds and subject matter. “I opened up new influences and new lyrical content that I hadn’t really touched on before because of the circumstances that I was in and we all were in. I definitely started to look at things differently and reflect on things that I hadn’t before. And there was a lot of uncovering to do,” he says.

He found himself reflecting on his life, specifically the past decade “and how that time affected me positively and negatively,” he says. That contemplation found its way into the songs. “There’s so many different themes in it, but it all really revolves around that,” he says.

“A Beautiful Dream” was inspired by the concept of zenosyne, the sense that time moves faster as you get older, and contains an echoing] voicemail from his mother, “which I think is really cool and sad,” Hemmings says. Soaring “Starting Line” talks about missing memories. “Time just gets away from you so quickly. And there’s these moments that will never come around again. And there’s something so terrifying, but also so beautiful about that,” he says.

Some of the songs, including “Motion,” “Starting Line,” and “Repeat,” deal with identity and growing into the person Hemmings is now. The funk-filled “Motion” also talks about a time in Hemmings’s life where “I couldn’t trust the thoughts that were in my head,” he said. “They didn’t really feel like my own.” In the song, he sings, “These hands are strangers, they ain’t my own / My eyes are lying, my eyes are lying to me.”

It was important to Hemmings that the music reflected the lyrical content in weight and scope. “I think because the topics were so grand and large — they were such dreamy, ethereal things — I really wanted it to match that and do the lyric and the feeling that I felt justice,” he says.

What came out was a dramatic pop album with both big, movie-score crescendos, and quiet, intimate moments that sound like they were made in one room in quarantine. The music and tone of Hemmings’s voice are so powerful that the songs almost don’t require words to express emotions. Even in its smaller moments, it feels epic, an evolution from CALM, stepping further away from rock and deeper into pop with hints of indie rock mixed in. There’s a variety of styles: psych-rock on “Motion,” synthpop on “A Beautiful Dream,” folk on “Place in Me” and Hemmings calls “Saigon” “cruise-pop.” Hemmings wanted to create soundscapes, which he does through a chorus of backing vocals, echoing percussion, piano, twinkling acoustic guitars and synths. “I just feel like it’s a world to get lost in,” he says.

Sierra Deaton, Hemmings’s fiancée, co-wrote “Bloodline” and energetic, groove-laden “Baby Blue.” “I feel like that song is maybe the nicest I am to myself on the album, and I think that is very much her influence… because her influence in my life has been obviously very positive,” Hemmings says. Deaton, an artist and songwriter, was previously one half of X-Factor-winning duo Alex & Sierra and also co-wrote 5SOS’s CALM track “Lover of Mine.”

Hemmings met his producer Witte (Harry Styles, Mills, Amy Shark) through a friend and says Witte’s the only new person Hemmings met during quarantine. “He really understood the project and allowed it to flourish naturally and follow whatever instincts I had, obviously guiding it… He’s basically organizing my brain,” Hemmings says. When they started working together, there still wasn’t a goal for the music. “Props to him for even doing it, because there was no end to it,” Hemmings says. “We just were making music for the fun of it.”

It’s hard for Hemmings to pinpoint the exact moment where the music he was writing turned into an album, but the dynamic and cinematic song “Mum” was definitely important. “I remember writing that and thinking, this feels like a different project,” he says. Completing a whole album by himself felt strange, especially since he was used to doing it with three other people. “Up until releasing the album, the concept of releasing something separate to the band was still a very scary thing,” he says.

Hemmings and his 5SOS mates have already begun working on new music together. The other members, Michael Clifford, Calum Hood, and Ashton Irwin, have all been supportive of Hemmings (Irwin released his solo album Superbloom last September). Hemmings thinks the process of working on his solo effort and spending some time alone at the piano bench will help him when it comes to the band. “I think that the songwriting, and the production, and the making music side, makes me, when I go back to the band, better at all those things,” he says. “It just gives me more tools in the tool belt.”