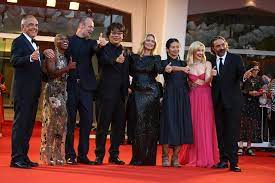 The French abortion drama “Happening” has won the Golden Lion at the 78th International Film Festival, while Paolo Sorrentino’s “The Hand of God” won runner up.

The competition this year was robust, including well-received films like Jane Campion’s “The Power of the Dog,” Pedro Almodóvar’s “Parallel Mothers,” Maggie Gyllenhaal’s “The Lost Daughter” and “The Hand of God.” Twenty-one films were vying for the prize, which has become a promising early indicator of a film’s Oscars prospects.

“I did this movie with anger. I did the movie with desire also. I did it with my belly, my guts, my heart, my head,” Diwan said Saturday. “I wanted “Happening” to be an experience.”

Sorrentino took the runner up prize, the Silver Lion, for his semi-autobiographical film “The Hand of God,” while Campion won the Silver Lion for best director for her period epic “The Power of her Dog.” It’s her second time winning a runner-up prize at Venice. Her first was in 1990 for “An Angel at My Table,” a Janet Frame biopic.

“It’s amazing to get an award from you people,” Campion said, talking to the jury standing beside her. “You’ve made the bar very, very high for me in cinema, Bong, Chloé.”

Penélope Cruz won the Volpi Cup for best actress for her performance as a new mother in Almodovar’s “Parallel Mothers.” She thanked her director and frequent collaborator for, “Inspiring me every day with your search for truth.”

“You have created magic again and I could not be more grateful or proud to be part of it,” Cruz continued. “I adore you.”

Gyllenhaal won best screenplay for her adaptation of Elena Ferrante’s 2008 novel “The Lost Daughter,” which is both her first screenplay and film as a director.

“I can’t tell you how thrilled I am to be here,” Gyllenhaal said. “I was married in Italy, in Puglia. I found out I was pregnant with my second daughter in Italy. And really my life as a director and writer and my film was born here in this theater.”

Copyright 2021 The Associated Press. All rights reserved. This material may not be published, broadcast, rewritten or redistributed.