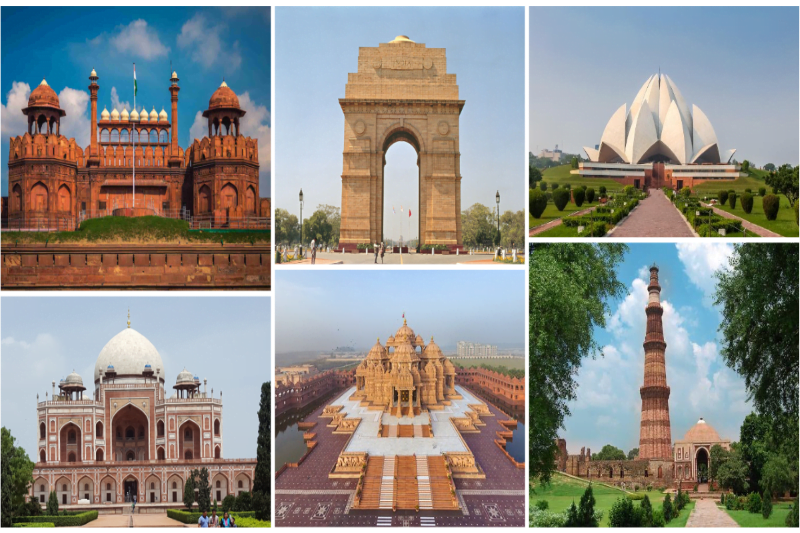 India’s capital city, New Delhi, is one of the most visited tourist places in the country. The city has a rich history and heritage and is a melting pot of various cultures. With an intriguing mix of ancient and modern attractions, New Delhi has a lot in store for travelers. There are historical places, heritage monuments, government buildings, temples, museums, amusement parks, shopping markets, and more! If you are planning a one day trip in Delhi, then here are the best places you can visit for a great sightseeing trip from Pennsylvania to New Delhi.

Also known as Lal Qila, Red Fort is a famous historical landmark in Delhi. It was built by the Mughal emperor Shah Jahan when he moved his capital to Delhi from Agra. The fort, which was listed among the UNESCO World Heritage Sites, lies on the western banks of the Yamuna River. Red Fort’s architecture is a fusion of Mughal, Persian, Hindu, and other architectural styles.  The pale reddish shade of its outer facade gives it the name Red Fort. Surrounded by a well-maintained garden, the vast Red Fort complex consists of many spacious halls, palaces, durbars, and museums. Its museum houses various Mughal era relics such as textiles, weapons, paintings, carpets, metal work, etc.

Another popular historical monument in the city, India Gate is actually a war memorial built in the memory of tens of thousands of soldiers who laid down their lives during the First World War and Afghan War. You can find their names inscribed on the walls of India Gate, which was originally known as the All-India War Memorial. Beautiful gardens, fountains, etc. came up in the area surrounding the arch over time and today, India Gate is a favorite hangout spot for locals and tourists alike. This historical monument looks more beautiful when illuminated after dusk.

The Bahá í House of Worship, commonly known as the Lotus Temple, is one of the must-visit places during your one day trip in Delhi. The impressive architecture of this temple is a sight to behold. It is designed in the shape of a lotus and has nine petal-like structures made with marble. All the nine entrances lead visitors to the central prayer hall that can hold up to 2500 people. The temple is open to people of all religions and faiths. Visitors come here in large numbers to pray and meditate in peace. More than 70 million people visited this temple in the first 15 years of its inauguration.

Located on the banks of the Yamuna River, Akshardham Swaminarayan Mandir is a place that interests travelers who are into history, culture, architecture, and spirituality. The huge temple complex, spread across 100 acres of land, is dedicated to Bhagwan Swaminarayan and boasts of many architectural wonders. You will be blown away by the grand Hindu architecture of this temple complex. Swaminarayan temple is adorned with exquisite carvings that depict dancers, musicians, various birds, and animals apart from Gods and Goddesses. Some of its architectural highlights include 234 carved pillars, 20,000 idols of Hindu deities, sages, and acharyas, vast mandapas, and decorated arches. Manicured gardens, an art gallery, a musical fountain, and a theater are other attractions within the temple complex.

Hauz Khaz is a charming village known for its eclectic tourist attractions that range from historical forts and other ruins of the medieval town Siri (on which Hauz Khas was built) to urban hangout spots such as cafes, bars, restaurants, boutiques, and art galleries. It is equally popular with history buffs as well as the party-loving crowd. Do check out Hauz Khas Fort, Bagh-I-Alam Ka Gumbad, Hauz-i-Shamsi, Tefe Wala Gumbad, Kali Gumti, Nili Masjid, and other medieval forts while you are here. This place is named Hauz Khaz after the 13th-century reservoir that exists here.

Other popular places you can visit during your one-day trip in Delhi include Lodhi Gardens, Qutub Minar. Gurudwara Bangla Sahib, Jama Masjid, Humayun’s Tomb, and Chandni Chowk, Dilli Haat, Raj Ghat, etc. You can add all these places to your Delhi itinerary if you are planning a long trip. Get the best deals on flights to New Delhi from Seattle and other US cities at Indian Eagle and book your tickets now!