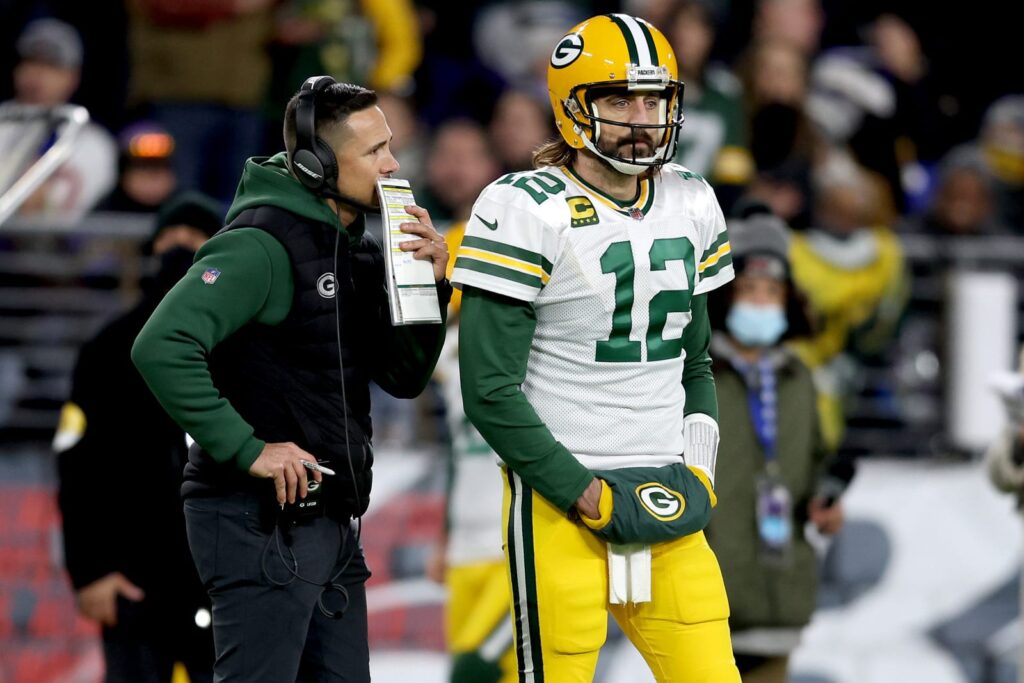 BALTIMORE, MARYLAND – DECEMBER 19: Head coach Matt LaFleur of the Green Bay Packers talks to Aaron Rodgers #12 during the fourth quarter of the game against the Baltimore Ravens at M&T Bank Stadium on December 19, 2021 in Baltimore, Maryland. (Photo by Patrick Smith/Getty Images)

The Green Bay Packers will be active prior to the November 1 trade deadline, but their urgency turned up a notch with the 49ers dealing for Christian McCaffrey.

Christian McCaffrey will change the scope of the San Francisco 49ers offense, and in turn the NFC as a whole. The conference doesn’t have a clear favorite at the moment, hence the Niners feeling as though they can go for it all.

CMC is one of the best running backs in football when healthy, and can play pretty much every down. He pass protects, catches passes and is arguably the most explosive player in that offense with the ball in his hands (sorry, Deebo).

So, what should other NFC contenders do to answer the 49ers check? That’s a question for the Packers to respond to thusly.

Claypool was readily available as of a week ago. However, after a 90-plus yard performance, it’s fair to wonder if Pittsburgh would rather hang onto him for a late-season run. Entering Week 7, it’s early enough in the season to assume a turnaround is possible. This Sunday night against the Miami Dolphins will tell plenty about how the Steelers approach the trade deadline.

Assuming he is available, Claypool has No.1 or No. 2 wide receiver potential at his best. With Aaron Rodgers at the helm, Claypool’s numbers would jump, as he would easily be the best wideout on the depth chart.

Elijah Moore is a different story. While Claypool has handled himself the right way amid trade rumors, Moore has not. The Ole Miss product was unhappy with the amount of target he received in the Jets win over Green Bay. Yes, a win. Moore feels he’s being phased out of the offense, and after missing practice this week, the Jets were notified that he’d prefer a trade to a new destination.