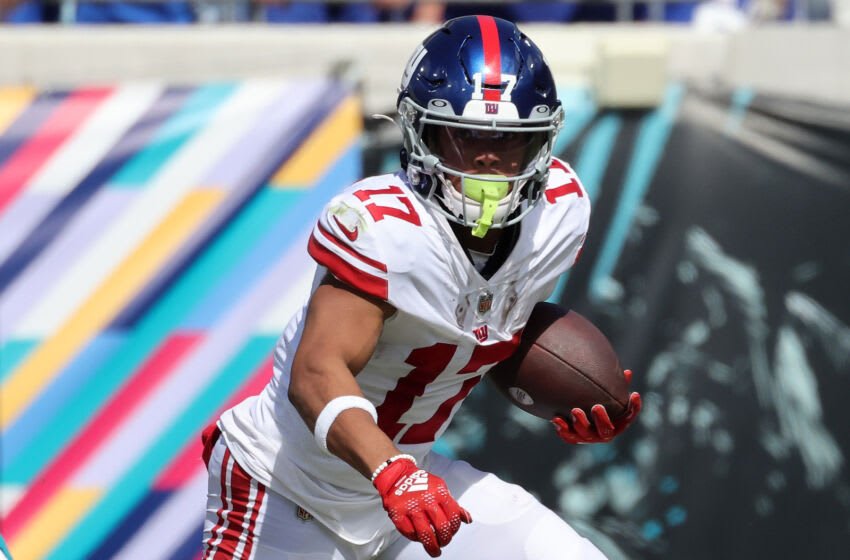 JACKSONVILLE, FLORIDA – OCTOBER 23: Wan’Dale Robinson #17 of the New York Giants runs the ball in the third quarter against the Jacksonville Jaguars at TIAA Bank Field on October 23, 2022 in Jacksonville, Florida. (Photo by Mike Carlson/Getty Images)

Injuries and trades have made a trio of running backs rate among the top fantasy football pickups ahead of Week 8 in the NFL.

The one thing you don’t want to see in fantasy football, or the NFL for that matter, is killer injuries. The New York Jets saw star rookie running back Breece Hall go down with a knee injury while the Seattle Seahawks also saw the same happen to top receiver D.K. Metcalf.

The timing of these injuries is brutal for fantasy purposes since we are just into the start of the bye weeks, making it even harder to fill your lineup. The good news is that there are a lot of good pickup candidates on the waiver wire this week and we’ll break down the top five today, with all rostered percentages referenced provided from Yahoo leagues.

The Giants have had their fair share of injuries in the wide receiver room but those have created opportunities for players to step up. One intriguing player who stepped into the spotlight today was rookie Wan’Dale Robinson, who saw his most extensive game action in Jacksonville.

Robinson was targeted eight times by Daniel Jones, converting six of them into receptions for 50 yards. The 2022 second-round pick became a training camp standout due to his speed but an early injury sidelined Robinson for a few weeks, leading some fantasy owners to forget about him.

Robinson is rostered in 29 percent of Yahoo leagues but his unique skillset and strong coaching staff should make him a weapon for the Giants down the stretch. Fantasy owners in need of flex options to get through the bye weeks should take a shot on Robinson with the Giants having a favorable schedule (at Seattle, bye, Houston, Detroit) over the next month.