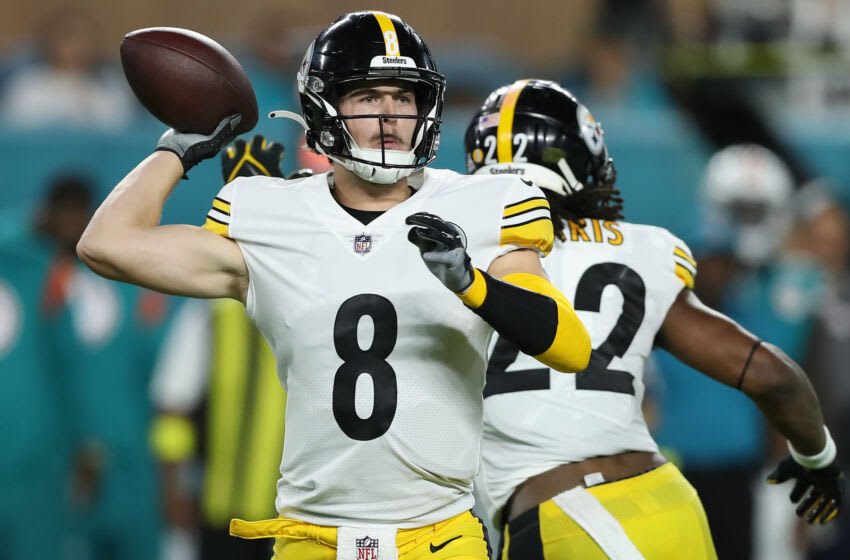 MIAMI GARDENS, FLORIDA – OCTOBER 23: Kenny Pickett #8 of the Pittsburgh Steelers throws the ball during the first quarter against the Miami Dolphins at Hard Rock Stadium on October 23, 2022 in Miami Gardens, Florida. (Photo by Megan Briggs/Getty Images)

Kenny Pickett was trying to become a Sunday Night Football hero and lead the Steelers back against the Dolphins but his hero ball turned into a disaster.

What looked like it could be a high-octane Sunday Night Football matchup between the Miami Dolphins and Pittsburgh Steelers to cap off a long day of action in Week 7 turned into a rock fight.

There were no points in the second half from either team as Miami held a 16-10 at halftime and tried to cling onto it. Kenny Pickett was doing his best to try and change that. But late in the fourth quarter, it could be said that he was trying a little too hard to be the hero.

Pickett started trying to make some hero-type throws to propel the Steelers to a primetime victory. But his first attempt at that with the team driving into the red zone resulted in a Jevon Holland interception and long return. Pittsburgh got the ball back, though, and Pickett drove deep into Dolphins territory in the two-minute drill.

NFL Twitter had plenty to say about Pickett and Pittsburgh after the game with very few giving the Dolphins their flowers for the win.

The moment Kenny Pickett tries to do anything he’s seen grown-ups do on a football field, disaster strikes

Another insanely bad decision by Pickett there.

Two late unclutch interceptions were not good signs for rookie Kenny Pickett … who doesn’t have a whole lot more arm than Tua does.

Pickett has thrown wayyyyy too many interceptions

p lang=”en” dir=”ltr”>There’s some kind of irony with Brian Flores benching Igbinoghene for two years, presumably advising the Steelers offense to attack him, and then Noah coming up with the game-ending INT.

While you could still make the argument that Pickett, the Steelers’ first-round rookie quarterback, is still far better of an option than Mitchell Trubisky, the truth of the matter is that he is still making the first starts of his career, and that comes with a multitude of mistakes and learning experiences.

Everyone witnessed that in the clutch moments on Sunday night.

This might not be a feeling that Steelers fans are all that familiar with, but sometimes you have to endure growing pains. They never feel good; the hope is just that they are worth it, which is the case with Pickett as the franchise quarterback in Pittsburgh.