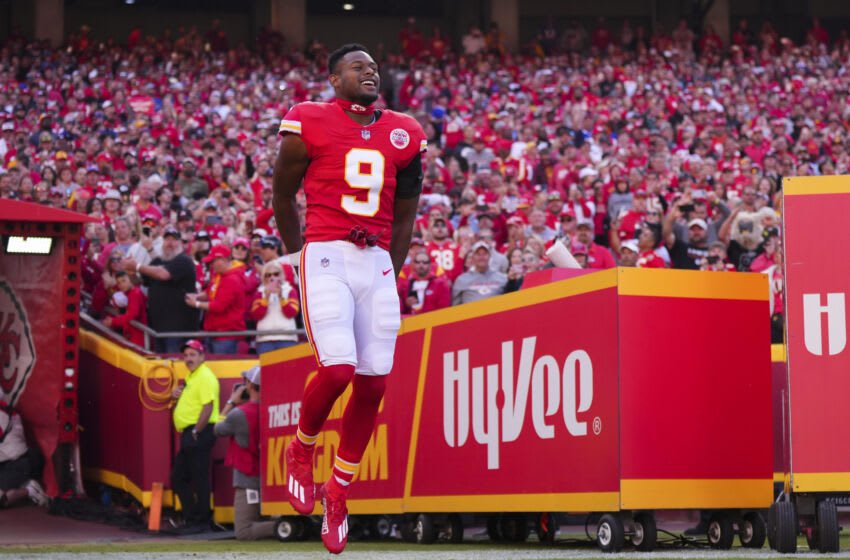 KANSAS CITY, MO – OCTOBER 16: JuJu Smith-Schuster #9 of the Kansas City Chiefs runs onto the field during introductions against the Buffalo Bills at GEHA Field at Arrowhead Stadium on October 16, 2022 in Kansas City, Missouri. (Photo by Cooper Neill/Getty Images)

The Kansas City Chiefs have revealed their secret weapon to improving team chemistry, and it’s one that took a jab at Kyler Murray.

The Kansas City Chiefs have revealed their secret weapon to improving team chemistry, and it’s one that took a jab at Arizona Cardinals quarterback Kyler Murray.

Chiefs wide receiver JuJu Smith-Schuster said playing Call of Duty: Warzone with Patrick Mahomes, Travis Kelce and Marquez Valdes-Scantling is what made the difference in their chemistry on Sunday.

#Chiefs WR JuJu Smith-Schuster says that playing Call of Duty: Warzone with Patrick Mahomes, Travis Kelce and MVS on Friday – they won three games in a row. He says that is what was the difference in their chemistry today.

Kansas City needed something to change after losing 24-20 to the Buffalo Bills, just their second loss of the season, one week prior. They went on to destroy the San Francisco 49ers by the final score of 44-23. The Chiefs have been a solid team for years, making the playoffs every season since 2015 and winning a Super Bowl within that span.

It’s no surprise that they pulled off such a big win, but the shade thrown at Murray is quite hilarious.

Murray made it well known during the offseason that he loves video games. Back in July, the Associated Press revealed that his contract includes an “independent study” clause that says “the quarterback must study at least four hours each week during the season for Arizona’s upcoming game and that he can’t be distracted by ‘watching television, playing video games or browsing the internet.’”

While there’s no guarantee that clause was put in due to his love for video games…it’s easy to infer it.

His video game usage and completion percentage was even analyzed in August, with statistics revealing that his performance is worse when he plays Call of Duty on Double XP weekends.

p lang=”en” dir=”ltr”>A statistical analysis of NFL Quarterback Kyler Murray’s performance shows that he plays worse when there’s active Double XP weekends happening in Call of Duty. There were rumors stating that they he played a lot of Call of Duty, even during the season. https://t.co/47sI8lwN8u pic.twitter.com/PcBMs33RcY

Murray’s performance may get worse from spending so much time on what he loves outside of football. It’s humorous from Kansas City’s point of view, as Smith-Schuster stated the game had the exact opposite on his teammates.