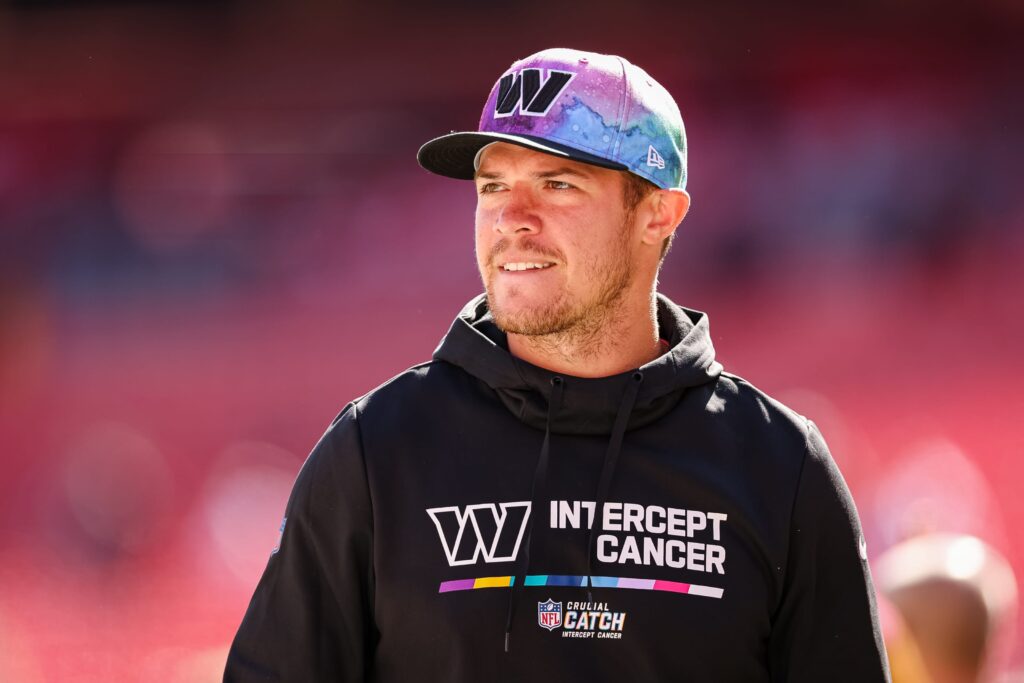 LANDOVER, MD – OCTOBER 09: Taylor Heinicke #4 of the Washington Commanders looks on before the game against the Tennessee Titans at FedExField on October 9, 2022 in Landover, Maryland. (Photo by Scott Taetsch/Getty Images)

Let’s break down the five best fantasy football pickups to make for Week 8.

Week 7 of the NFL season continued to bring plenty of surprises. The Carolina Panthers upset the Tampa Bay Buccaneers 21-3, and Taylor Heinicke led the Washington Commanders to a 23-21 victory over the Green Bay Packers.

From a fantasy football perspective, players such as Gus Edwards, Parris Campbell, and Juwan Johnson had big individual games.

Let’s take a look at the best pickups to make for fantasy football Week 8.

Taylor Heinicke made his first start of the season on Sunday. On Saturday, Carson Wentz was placed on IR with a finger injury.

After a rough start, Heinicke bounced back and reestablished his connection with Terry McLaurin. Heinicke finished the game with 201 passing yards, two touchdowns, and one interception. It was not an amazing performance, but it put him back on the fantasy radar.

Last season, Heinicke took over as Washington’s starter in Week 2. From that point forward, he was 17th among quarterbacks in fantasy points. This season, the Commanders have a better supporting cast. Curtis Samuel is fully healthy, and rookie Jahan Dotson has made a big impact early in the season. Dotson has four receiving touchdowns in four games.

In two-quarterback leagues and deeper formats, he has appeal, while Wentz remains sidelined.